A rare alignment of Ceres and Vesta

This week, Fred Espenak posted this wonderful photo, which shows the minor planets Ceres and Vesta, together on Earth’s sky dome in late June and early July 2014. 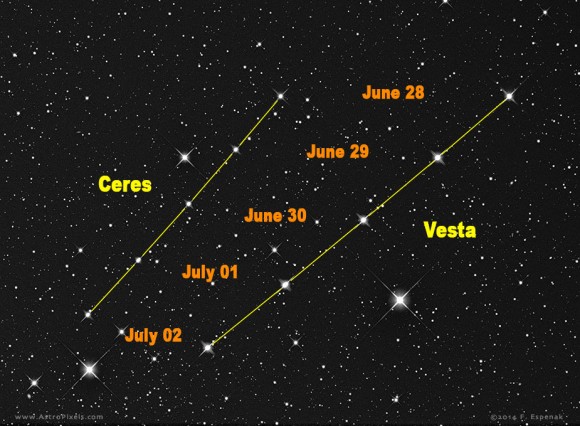 Dwarf planet Ceres and asteroid Vesta – the two brightest minor planets – are seen here tracking along nearly together on Earth’s sky dome in June and July 2014. Photo and labels by Fred Espenak. Click here for more details on this photo. Used with permission.

Fred Espenak – who is beloved among skywatchers as Mr. Eclipse – retired a few years ago after a 30-year career as a professional astrophysicist at NASA’s Goddard Space Flight Center. He’s now living in Arizona, in the planned astronomy community called Arizona Sky Village, and he has a blog called Portal to the Universe, where he reports on astronomical happenings. This week, he posted this wonderful photo, which shows the dwarf planet Ceres and asteroid Vesta, together on Earth’s sky dome. Fred wrote:

From mid-June through mid-July 2014, the minor planets Vesta and Ceres will appear close enough to each other to be viewed in the same field in a low power telescope. This is the closest alignment between the two objects since they were discovered in 1801 (Ceres) and 1807 (Vesta).

Thank you for everything, Fred Espenak!