Two years ago, during a volcanic eruption, a new island was born in the Pacific. It ultimately swallowed its neighbor. Before and after images from space, here. 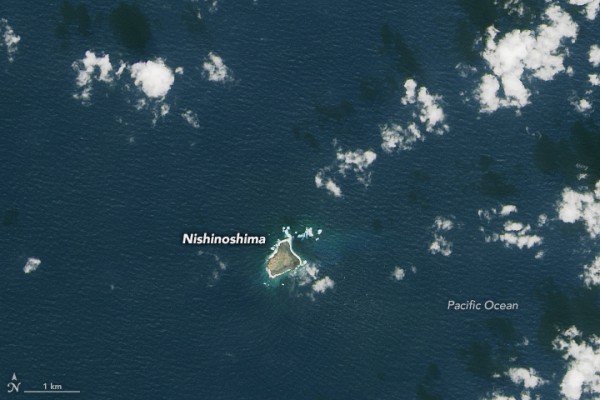 Landsat 8 captured images of the old and new island of Nishinoshima. This image shows the area on November 6, 2013, two weeks before the eruption started. Image via NASA Earth Observatory. 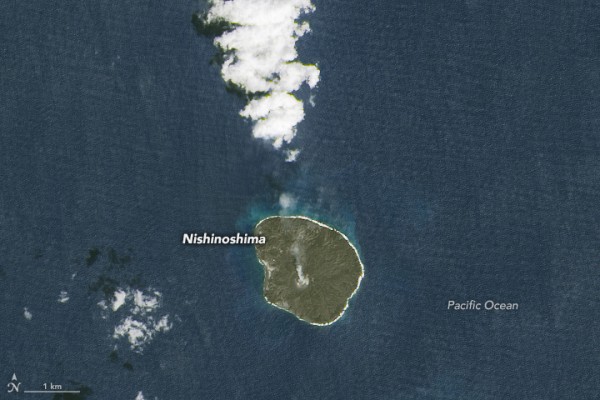 This image was acquired by Landsat 8 on October 11, 2015. NASA says it’s the most recent cloud-free view. In both images, pale areas just offshore likely reveal volcanic gases bubbling up from submerged vents or sediments disturbed by the eruption. Image via NASA Earth Observatory.

NASA Earth Observatory published these two images this week. It’s the old and new island of Nishinoshima in the Pacific Ocean. NASA wrote:

Two years ago, a new island, or “nijima,” rose above the water line in the western Pacific, about 1,000 kilometers (600 miles) south of Tokyo. It grew out of the sea just 500 meters from Nishinoshima, another volcanic island. Over the past two years, that new island swallowed up its neighbor, and the merged island is now twelve times the size of the old island.

… Lava continues to ooze out slowly, though there are occasional explosions of rock and ash as well. Investigators noted that the total surface area of the island decreased a bit from September to November 2015—2.67 square kilometers to 2.64—likely because of erosion of the coasts by wave action.

Use an image comparison tool at NASA Earth Observatory’s site.