A glance back at the International Space Station

When SpaceX Dragon left the International Space Station (ISS) yesterday, before heading back to Earth, it took a last look over its shoulder at the ISS in space. 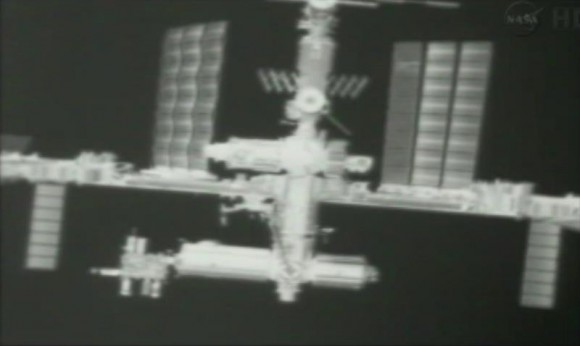 On departing from ISS on March 26, 2013, SpaceX Dragon turned back toward the space station and captured this image. Image via SpaceX and NASA.

The second commercial cargo craft to fly to the International Space Station (ISS) was a SpaceX Dragon, which departed ISS yesterday – March 26, 2013 – after a several-week stay. Dragon was carrying a precious cargo of thousands of pounds of science experiment samples and gear. ISS astronauts used the space station’s robotic arm to pluck Dragon from its berthing port and release it back to Earth orbit. The capsule splashed down in the Pacific about five hours later. Before leaving ISS behind, Dragon’s camera turned back and captured this cool photo of ISS, floating in the abyss of space.

Don’t miss a single Today’s Image. See them all here.