A Sun-like star in its end phase of life about 4,200 light years from Earth. 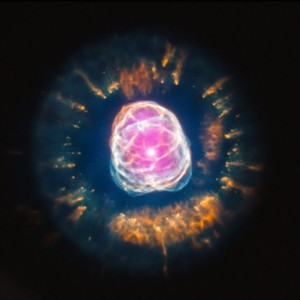 When a star like our Sun uses up all of the hydrogen in its core, it becomes what is called a “planetary nebula.” During this stage, the star begins to cool and expand, increasing its radius by tens to hundreds of times its original size. Eventually, the outer layers of the star are swept away by a slow and thick wind, leaving behind a hot core. The radiation from the hot star and the interaction of its fast wind with the slower wind creates the complex and filamentary shell of a planetary nebula. This composite image of NGC 2392 contains X-ray data from Chandra in pink showing the location of million-degree gas near the center of the planetary nebula. Data from the Hubble Space Telescope – colored red, green, and blue – show the intricate pattern of the outer layers of the star that have been ejected.

Thank you! Your submission has been received!
Oops! Something went wrong while submitting the form.
END_OF_DOCUMENT_TOKEN_TO_BE_REPLACED