Zoom in to star cluster NGC 2100 in Large Magellanic Cloud

A dazzling star cluster – NGC 2100 – lies in the Large Magellanic Cloud, a neighbor of the Milky Way.

Check out a video that lets you zoom in through the glowing gas of the Tarantula Nebula to see a star cluster – NGC 2100 – in the Large Magellanic Cloud, a satellite galaxy of the Milky Way.

Star clusters are groups of stars that formed around the same time from a single cloud of gas and dust. The stars with the most mass tend to form in the center of the cluster, while those with less mass dominate the outer regions. This, along with the greater number of stars concentrated in the center, makes the middle of the cluster brighter than the outer areas. 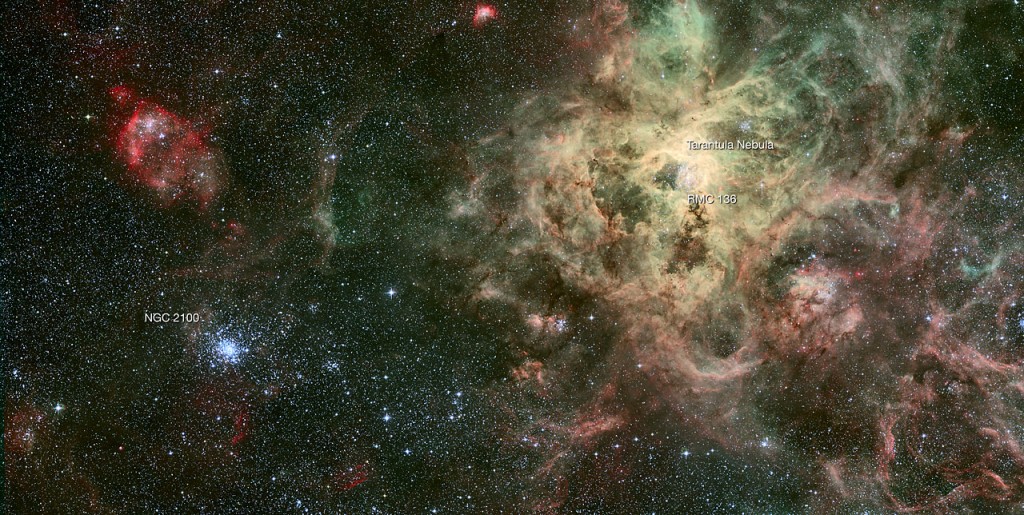 This picture shows the surroundings of star cluster NGC 2100 in the Large Magellanic Cloud, dominated by the Tarantula Nebula, the most active star formation region in the Local Group of galaxies that includes the Milky Way. The colors that appear in nebulae depend on the temperatures of the stars lighting them up. Image Credit: ESO

NGC 2100 is an open cluster, which means its stars are relatively loosely bound by gravity. These clusters have a lifespan measured in tens or hundreds of millions of years. They eventually disperse through gravitational interaction with other bodies.

Globular clusters, which look similar to the untrained eye, contain many more older stars and are much more tightly bound, and so have far longer lifespans: many globular clusters have been measured to be almost as old as the universe itself. So while NGC 2100 might be older than its neighbors in the Large Magellanic Cloud, it is still a youngster by the standards of star clusters. 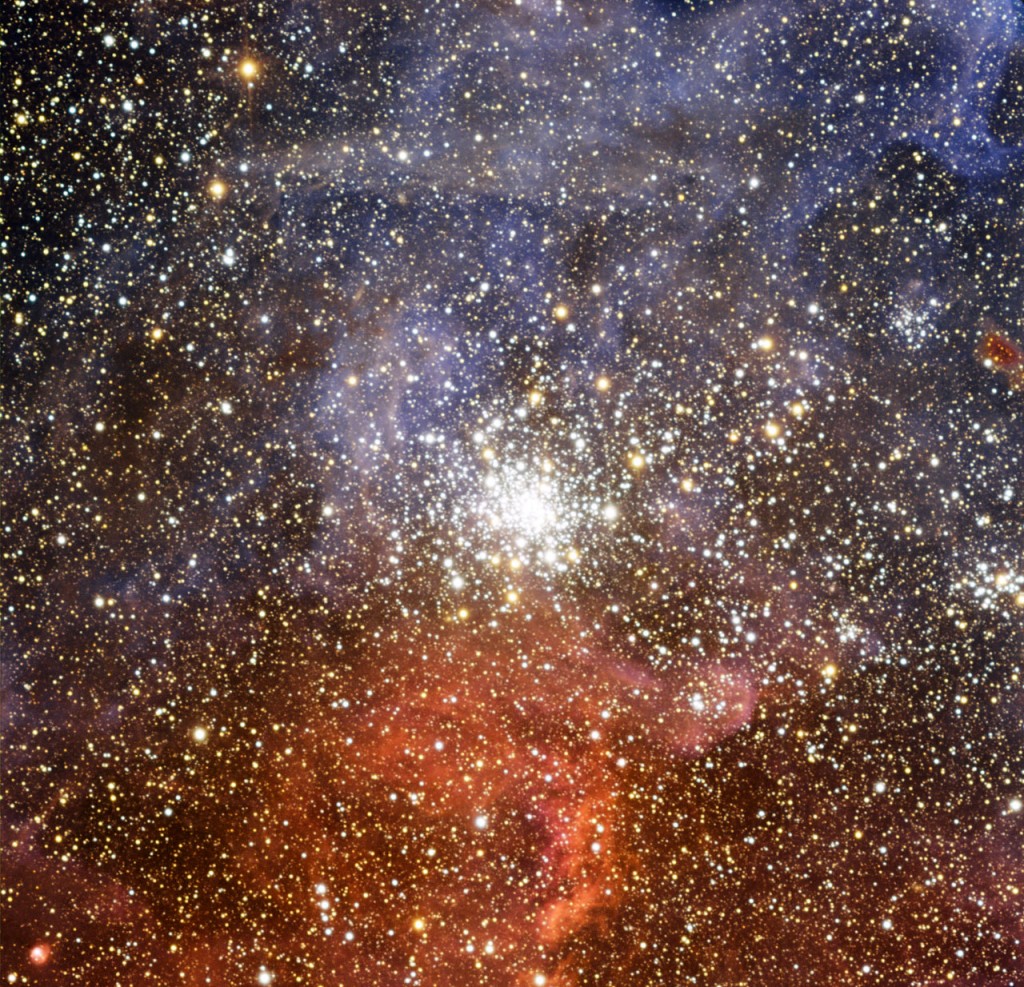 NGC 2100 lies close to the Tarantula Nebula, and some of the colorful outer parts of the nebula appear in this image. NGC 2100 is around 15 million years old. Image Credit: ESO

The European Southern Observatory (ESO) captured this image using the New Technology Telescope (NTT) and various color filters. The stars are shown in their natural colors, while light from glowing ionised hydrogen (red) and oxygen (blue) is overlaid. Hidden Treasures entrant David Roma found the data for this image in the depths of ESO’s archives as part of the 2010 astrophotography competition. 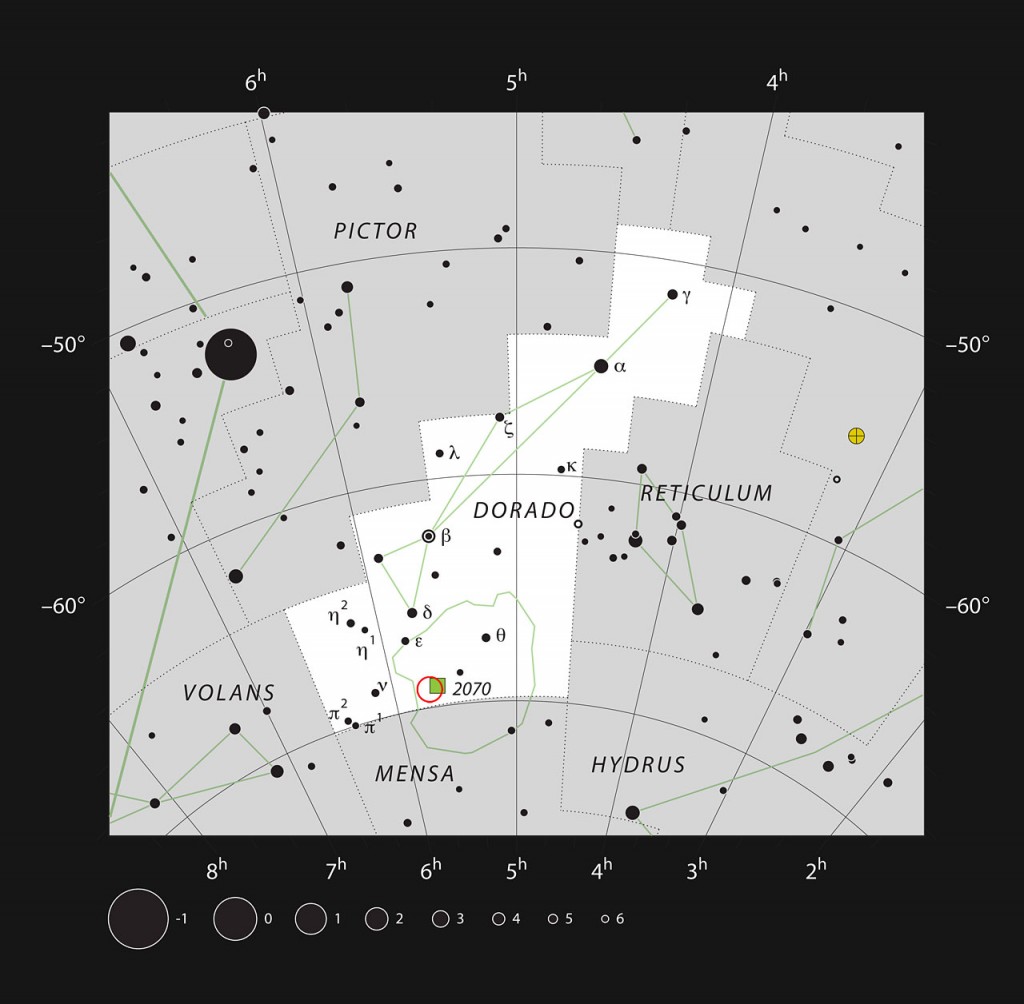 Location of NGC 2100 within the constellation of Dorado (The Swordfish). This map shows most of the stars visible to the unaided eye under good conditions. NGC 2100 is marked as a red circle. Through a moderate-sized amateur telescope this object appears as a small clump of faint stars. The adjacent green square represents the Tarantula Nebula (NGC 2070). Image Credit: ESO, IAU and Sky & Telescope