Zombie vortices may help lead to birth of new stars

Vortices arise from dead zones in disks around newly forming stars and help the stars complete their birth process.

A new theory by fluid dynamics experts at the University of California, Berkeley, shows how “zombie vortices” help lead to the birth of a new star.

Reporting earlier this week (August 20, 2013) in the journal Physical Review Letters, a team led by computational physicist Philip Marcus shows how variations in gas density lead to instability, which then generates the whirlpool-like vortices needed for stars to form. 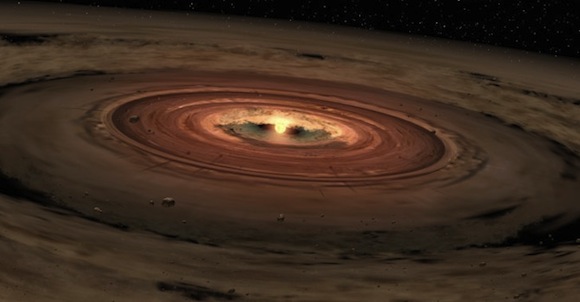 Artist concept of a brown dwarf, spotted by NASA’s Spitzer Space Telescope, surrounded by a spinning protoplanetary disk. UC Berkeley researchers have developed a model that shows how vortices help destabilize the disk so that gas can spiral inward toward a forming star. Image courtesy of NASA/JPL-Caltech

Astronomers accept that in the first steps of a new star’s birth, dense clouds of gas collapse into clumps that, with the aid of angular momentum, spin into one or more Frisbee-like disks where a protostar starts to form. But for the protostar to grow bigger, the spinning disk needs to lose some of its angular momentum so that the gas can slow down and spiral inward onto the protostar. Once the protostar gains enough mass, it can kick off nuclear fusion.

“After this last step, a star is born,” said Marcus, a professor in the Department of Mechanical Engineering.

What has been hazy is exactly how the cloud disk sheds its angular momentum so mass can feed into the protostar.

The leading theory in astronomy relies on magnetic fields as the destabilizing force that slows down the disks. One problem in the theory has been that gas needs to be ionized, or charged with a free electron, in order to interact with a magnetic field. However, there are regions in a protoplanetary disk that are too cold for ionization to occur.

“Current models show that because the gas in the disk is too cool to interact with magnetic fields, the disk is very stable,” said Marcus. “Many regions are so stable that astronomers call them dead zones – so it has been unclear how disk matter destabilizes and collapses onto the star.”

The researchers said current models also fail to account for changes in a protoplanetary disk’s gas density based upon its height. 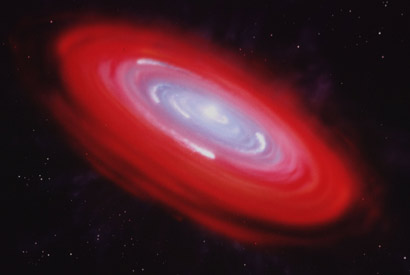 Illustration of the near stellar environment of the star Beta Pictoris. This image is based upon observations made with the Goddard High Resolution Spectrograph aboard the Hubble Space Telescope. Image by Dana Berry, Space Telescope Science Institute

“This change in density creates the opening for violent instability,” said study co-author Pedram Hassanzadeh, who did this work as a UC Berkeley Ph.D. student in mechanical engineering. When they accounted for density change in their computer models, 3-D vortices emerged in the protoplanetary disk, and those vortices spawned more vortices, leading to the eventual disruption of the protoplanetary disk’s angular momentum.

The researchers note that changes in the vertical density of a liquid or gas occur throughout nature, from the oceans – where water near the bottom is colder, saltier and denser than water near the surface – to our atmosphere, where air is thinner at higher altitudes. These density changes often create instabilities that result in turbulence and vortices such as whirlpools, hurricanes and tornadoes. Jupiter’s variable-density atmosphere hosts numerous vortices, including its famous Great Red Spot.

Connecting the steps leading to a star’s birth

This new model has caught the attention of Marcus’s colleagues at UC Berkeley, including Richard Klein, adjunct professor of astronomy and a theoretical astrophysicist at the Lawrence Livermore National Laboratory. Klein and fellow star formation expert Christopher McKee, UC Berkeley professor of physics and astronomy, were not part of the work described in Physical Review Letters, but are collaborating with Marcus to put the zombie vortices through more tests. 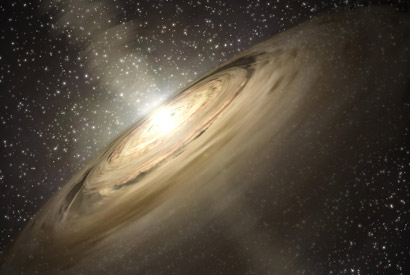 Illustration of a protoplanetary disk based upon observations from the Keck II telescope. Image courtesy of W. M. Keck Observatory

Klein and McKee have worked over the last decade to calculate the crucial first steps of star formation, which describes the collapse of giant gas clouds into Frisbee-like disks. They will collaborate with Marcus’s team by providing them with their computed velocities, temperatures and densities of the disks that surround protostars. This collaboration will allow Marcus’s team to study the formation and march of zombie vortices in a more realistic model of the disk.

“Other research teams have uncovered instabilities in protoplanetary disks, but part of the problem is that those instabilities required continual agitations,” said Klein. “The nice thing about the zombie vortices is that they are self-replicating, so even if you start with just a few vortices, they can eventually cover the dead zones in the disk.”

The other UC Berkeley co-authors on the study are Suyang Pei, Ph.D. student, and Chung-Hsiang Jiang, postdoctoral researcher, in the Department of Mechanical Engineering.