Artist’s impression of the glowing disc of material around the 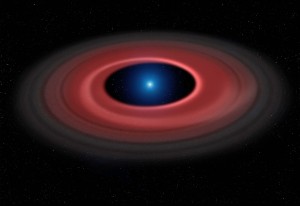 This artist’s impression shows how an asteroid torn apart by the strong gravity of a white dwarf has formed a ring of dust particles and debris orbiting the Earth-sized burnt out stellar core SDSS J1228+1040. Gas produced by collisions within the disc is detected in observations obtained over twelve years with ESO’s Very Large Telescope, and reveal a narrow glowing arc.

Thank you! Your submission has been received!
Oops! Something went wrong while submitting the form.
END_OF_DOCUMENT_TOKEN_TO_BE_REPLACED