What’s left in a solar system whose central sun has become a white dwarf? This study shows what our own solar system might become, billions of years from now. 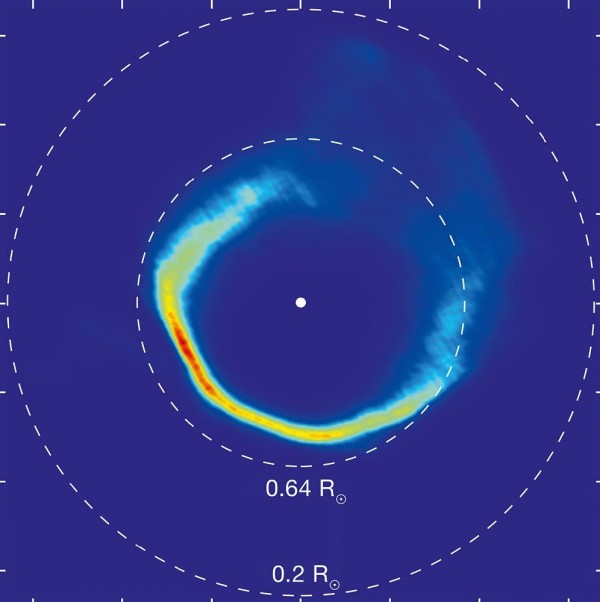 This plot shows the velocities – not the positions – of the gas in the disk around the white dwarf SDSS J1228+1040. Observations from Very Large Telescope in Chile, over a period of 12 years, made the map possible. View the complete image and read more here. Image via University of Warwick/C. Manser/ESO.

Late last week (November 11, 2015), an international team of astronomers released results of a 12-year study of the white dwarf star SDSS J1228+1040. The team used a technique called Doppler tomography — similar in principle to CT scans of the human body – to map out in detail the structure of glowing gases in a disk surrounding the white dwarf.

They now believe these gases are the remains of an asteroid being devoured by the star.

A white dwarf is essentially a dead star. It’s a small and super dense star, typically the size of a planet. White dwarfs form when a star with a mass about 1.44 times that of our sun – or less – has exhausted its thermonuclear fuel; it’s this fuel in a star’s interior that enables it to shine. Our sun will become a white dwarf billions of years from now, and thus, these astronomers said in a statement that these results:

… give a glimpse of the far-future fate of our solar system.

It’s a tiny glimpse, but these results are hard to come by. Only seven white dwarfs have ever been found that are surrounded by disks of orbiting gases. The astronomers compiled and analyzed 12 years of data from the Very Large Telescope at ESO’s Paranal Observatory in Chile and other observatories. Christopher Manser, a PhD student at the University of Warwick in the United Kingdom, led the study, which wanted to probe the question of “what would be left?” in a solar system whose central star has become a white dwarf.

The team concluded that they are seeing an asteroid that strayed dangerously close to the dead star and had been ripped apart by the immense gravitational forces – known to astronomers as tidal forces – between it and the white dwarf. This process caused the disk to form.

The team also found that the disk around SDSS J1228+1040 is somewhat lopsided.

And they were able to compare the orbiting disk to the rings of the planet Saturn in our solar system. However, they said:

… while J1228+1040 is more than seven times smaller in diameter than the ringed planet, it has a mass over 2,500 times greater. The team learned that the distance between the white dwarf and its disk is also quite different — Saturn and its rings could comfortably sit in the gap between them.

Boris Gänsicke, a co-author of the study, commented:

When we discovered this debris disk orbiting the white dwarf back in 2006, we could not have imagined the exquisite details that are now visible in this image, constructed from 12 years of data — it was definitely worth the wait. 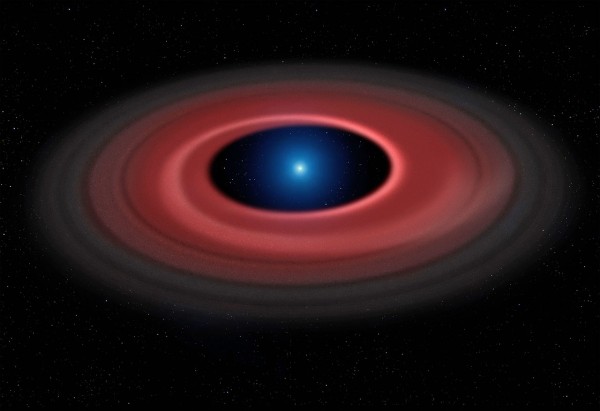 Artist’s impression of the disk around SDSS J1228+1040. Astronomers believe an asteroid is being torn apart by the strong gravity of this white dwarf star, forming a ring of dust particles and debris. Image via Mark Garlick and University of Warwick/ESO.

Bottom line: What is left in a solar system whose central sun has become a white dwarf? An analysis of 12 years of data on the white dwarf star SDSS J1228+1040 shows what our own solar system might become, billions of years from now.