Your toothpaste’s fluorine was formed in a star

Next time you’re brushing you teeth, think on this: New research suggests that the fluorine in your toothpaste originates from the sun’s dead ancestors.

The fluorine that is found in products such as toothpaste was likely formed billions of years ago in now dead stars of the same type as our sun, according to an international team of astronomers.

Fluorine can be found in everyday products such as toothpaste and fluorine chewing gum. However, the origins of the chemical element have been somewhat of a mystery. The team’s findings suggest that fluorine is formed in stars similar to the sun but heavier, towards the end of their existence. The sun and the planets in our solar system have then been formed out of material from these dead stars. 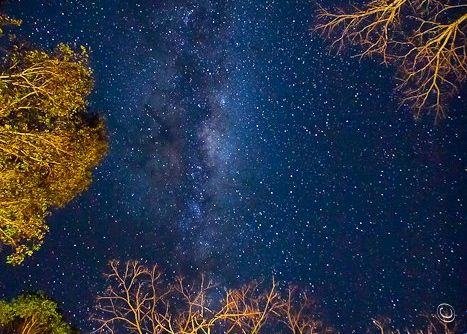 Nils Ryde is a reader in astronomy at Lund University. He said:

So, the fluorine in our toothpaste originates from the sun’s dead ancestors.

The team studied stars formed at different points in the history of the universe to see if the amount of fluorine they contain agrees with the predictions of the theory.

By analyzing the light emitted by a star, it is possible to calculate how much of different elements it contains. Light of a certain wavelength indicates a certain element. In the present study, the researchers used a telescope on Hawaii and a new type of instrument that is sensitive to light with a wavelength in the middle of the infrared spectrum. It is in this area that the signal is found in this case.

The researchers are now also turning their attention to other types of stars. Among other things, they will try to find out whether fluorine could have been produced in the early universe, before the first red giants had formed. They will also use the same method to study environments in the universe that are different from the environment surrounding the sun, such as close to the supermassive black hole at the center of the Milky Way. There, the cycle of stars dying and new ones being born goes considerably faster than around the sun. Ryde said:

By looking at the level of fluorine in the stars there, we can say whether the processes that form it are different.

The findings were recently published in The Astrophysical Journal Letters.