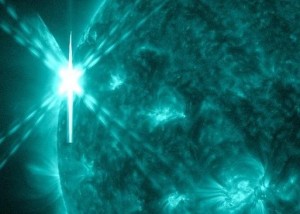 Ultraviolet flash from X2 flare from sunspot AR2339 – now coming around to the side of the sun facing Earth. The flare happened on May 5, 2015 at 22:11 UTC. Image via NASA’s Solar Dynamics Observatory.

Thank you! Your submission has been received!
Oops! Something went wrong while submitting the form.
END_OF_DOCUMENT_TOKEN_TO_BE_REPLACED