X-ray astronomers explored how quickly young stars settle down after blasting the space around themselves – including any possible planets – with energetic radiation.

Astronomers are using studies of the X-rays emitted by stars to learn more about how hospitable distant stars might be to life on other planets. A star’s X-ray emission mirrors its magnetic activity. In the early life of a star, this activity includes energetic radiation and eruptions that could impact surrounding planets and possibly keep life from gaining a foothold. In this study, researchers examined 24 stars like our sun. Each star was at least one billion years old. The X-ray data revealed that stars like our sun and its less massive cousins calm down “surprisingly quickly” after a turbulent youth. That’s good news for the possibility of life on distant planets.

A paper describing these results has been accepted for publication in the peer-reviewed Monthly Notices of the Royal Astronomical Society, and is available online.

Why are stars so very magnetically active when they are young? Young stars are rotating – or spinning on their axes – more rapidly than older stars. In their statement, the astronomers pointed out that a rotating star loses energy over time, and spins more slowly. As that happens, the magnetic activity level, along with the associated X-ray emission, drops. A September 6, 2017 statement from Chandra explained:

Although it is not certain why older stars settle down relatively quickly, astronomers have ideas they are exploring. One possibility is that the decrease in rate of spin of the older stars occurs more quickly than it does for the younger stars. Another possibility is that the X-ray brightness declines more quickly with time for older, more slowly rotating stars than it does for younger stars.

These astronomers also pointed out that – to understand how quickly stellar magnetic activity level changes over time – they needed accurate ages for many different stars. They said:

This is a difficult task, but new precise age estimates have recently become available from studies of the way that a star pulsates using NASA’s Kepler and ESA’s CoRoT missions. These new age estimates were used for most of the 24 stars studied here. 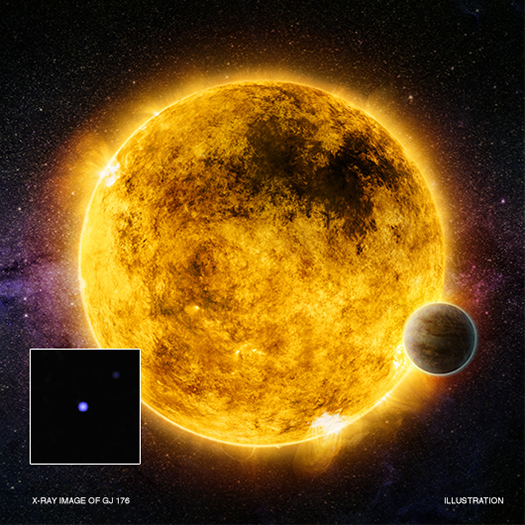 Artist’s illustration of a comparatively calm, older sunlike stars with an orbiting planet. The large dark area is a “coronal hole,” a phenomenon associated with relatively low levels of magnetic activity. The inset box shows the Chandra data of 1 of the 24 stars observed in this new study. It’s a 2-billion-year-old star called GJ 176, located 30 light years from Earth. Image via Chandra.