A storm on the sun from Active Region 1598 produced an X-flare on October 23, 2012. No auroras expected this time, though.

The sun produced an X1-class solar flare today (October 23, 2012) from sunspot AR1598, which has had three previous eruptions since it came into view around the limb of the sun two days ago. The flare occurred at 0322 UTC (October 22 at 10:22 p.m. in central U.S.). The flare did not produce a coronal mass ejection (CME), so no charged particles are headed Earth’s way. that means no beautiful aurora, or northern lights, from this event. But AR1598 is clearly a very active region on the sun, whose possible effects will be aimed more precisely toward Earth in the days ahead. 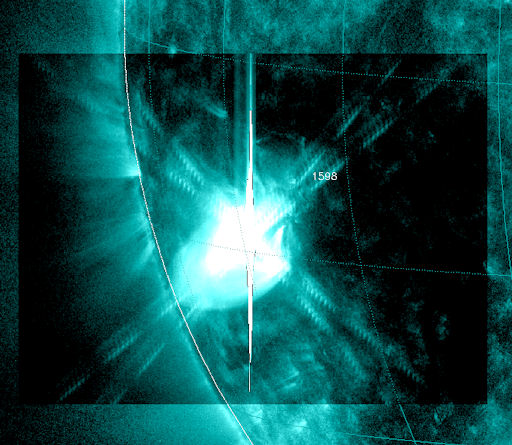 Radiation from the flare created waves of ionization in the upper atmosphere over Asia and Australia (the daylit side of Earth) and possibly HF radio blackouts at high latitudes.

Bottom line: A storm on the sun from Active Region 1598 produced an X-flare on October 23, 2012 at 3:22 UTC. No CME left the sun as a result, so no geomagnetic storms on Earth are expected. In other words, no auroral displays. But this region produced three other flares over the past 48 hours. Its possible effects will become more oriented toward Earth in the days ahead.