Posted by Jorge Salazar and Deborah Byrd in Space | August 15, 2012

What better goal for the world’s biggest telescope than to probe details of how stars like our sun and planets like Earth came to be?

In the high desert of northern Chile, a new telescope with a revolutionary design is coming online – ready to probe deep into space. It will explore places beyond imagination – the distant birthplaces of planets, stars, and galaxies century – to help us understand our place in the cosmos. Astronomers call this new telescope ALMA, which is the Spanish word for soul.

According to the scientists, one nation alone couldn’t build ALMA, whose official name is the Atacama Large Millimeter/Submillimeter Array. Working with the host country Chile, some of the largest observatories in the world joined together for ALMA. These include the National Radio Astronomy Observatory in North America, the European Southern Observatory, and observatories in Japan, Brazil and throughout Latin America.

Sixty-six large radio dishes connect together to form ALMA. These dishes are located 30 minutes by car from the town of San Pedro de Atacama in Chile – at the top of the world – at an altitude of 16,500 feet. 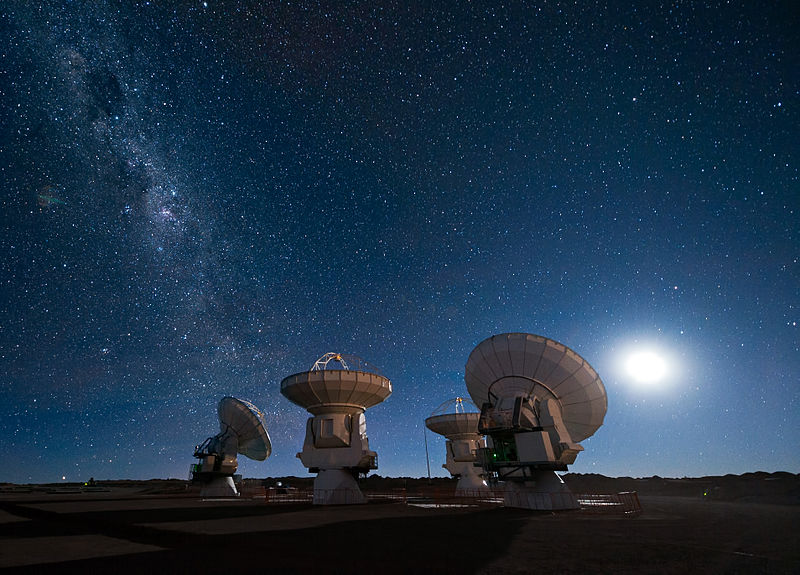 At that height and in the desert, there is little water vapor in the air. Those conditions are perfect for ALMA because water in the air blocks starlight in the portion of the “electromagnetic spectrum” that scientists want to study.

ALMA will observe starlight at wavelengths invisible to your eye – the long infrared wavelengths of starlight. Space observatories, like the Hubble Space Telescope, orbit high above the blanket of Earth’s atmosphere to see the universe at these wavelengths. Astronomers hope that ALMA will be even better than space telescopes at exploring the infrared universe – because they can build it much larger on land than they can in space today.

What do astronomers expect to learn with ALMA? 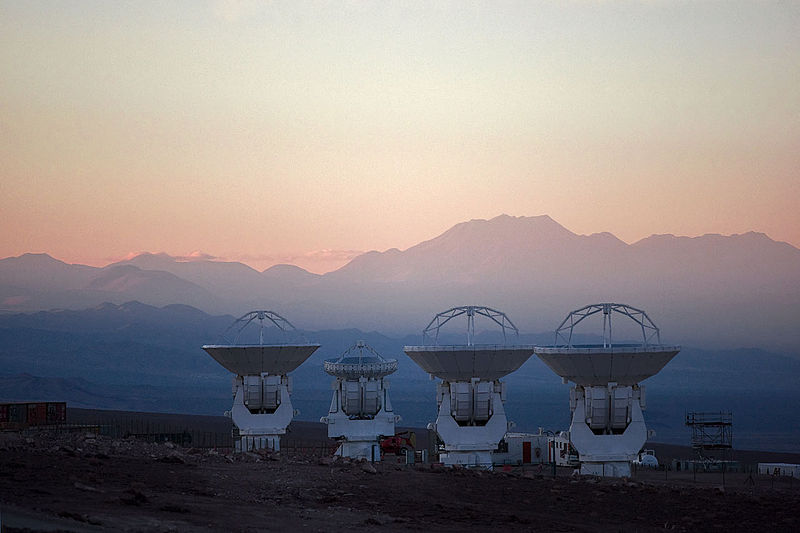 They hope to learn the details of where stars like our sun and planets like our Earth come from. Today, the process of star and planet formation is poorly understood. The ALMA array – with its ability to see in at infrared wavelengths – will help us probe the vast clouds of dust surrounding new stars and planets.

Antennae Galaxies, two galaxies in the process of colliding. The ALMA telescope found signs of gas clouds crashing into each other in these galaxies, in places where new stars are forming. That discovery verified astronomers’ theories that a shock wave from a colossal collision might initiate star formation.

ALMA has already verified astronomical theory stating that star formation heightens when galaxies collide. In 2011, as the dishes of ALMA began to come online, astronomers used them to look at the Antennae Galaxies – two large spiral galaxies like our Milky Way – known to be undergoing a vast cosmic collision.

ALMA found signs of gas clouds crashing into each other in the Antennae Galaxies, in places where new stars are forming. That discovery verified astronomers’ theories that a shock wave from a colossal collision might initiate star formation.

It’s a glimpse of a violent past for our universe that might provide clues to how ordinary stars like our sun – and planets like our Earth – came to be.

Bottom line: The ALMA telescope in northern Chile will be the largest telescope in the world when completed in 2013. ALMA – the Spanish word for “soul” – stands for Atacama Large Millimeter/Submillimeter Array.