“We’ve got the black holes cornered,” said the lead scientist Daniel Stern. “WISE is finding them across the full sky … “

NASA’s WISE mission – an infrared space telescope launched to low-Earth orbit in late 2009 – announced on August 29, 2012 that it has found “millions” of possible supermassive black holes in space, along with about 1,000 dust-obscured galaxies with very high temperatures, which NASA has labeled as “hot DOGs.” The black holes may be examples in the early universe of the supermassive black hole at the center of our own Milky Way galaxy.

In the early universe, when objects such as galaxies and black holes were younger, supermassive black holes such as these might have provided the power source for the highly luminous objects we know as quasars. 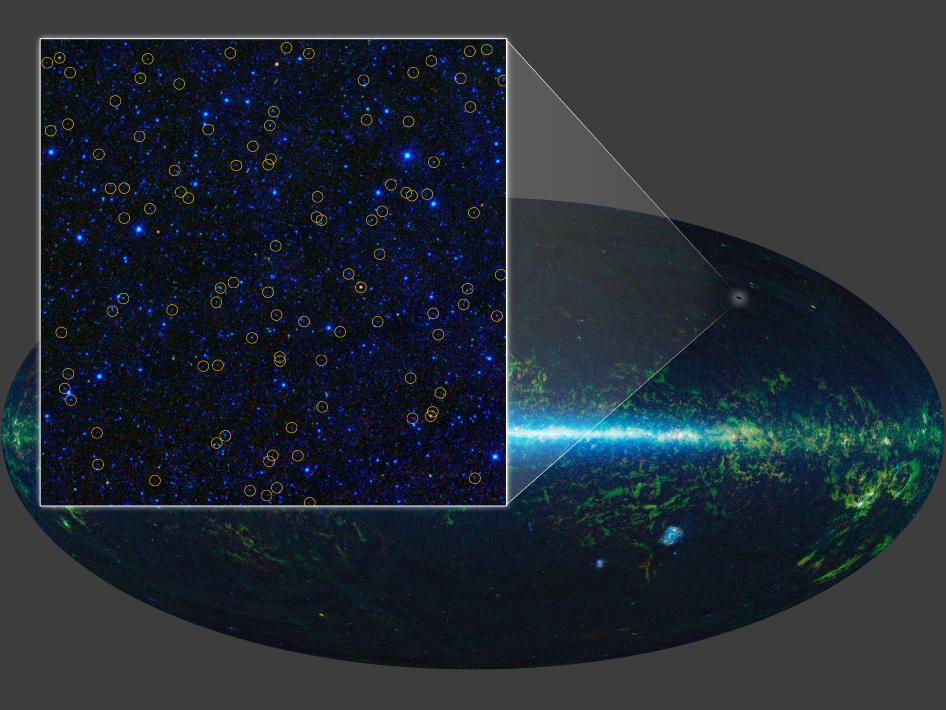 This image from NASA’s WISE mission zooms in on one small region of the sky – an area about three times larger than the moon. The black hole candidates – which might be powering quasars – are highlighted with yellow circles. Click here to expand this image. Image via NASA/JPL-Caltech/UCLA

We’ve got the black holes cornered. WISE is finding them across the full sky …

Why weren’t these objects seen before this? The answer is they are obscured by dust, and we could not see them through the dust. The WISE telescope can see through dust. WISE stands for Wide-field Infrared Survey Explorer. The telescope is sensitive to the infrared portion of the electromagnetic spectrum. It’s sometimes said to work as night-vision glasses do; some night-vision glasses also capture infrared light, which is emitted as heat by objects.

Between 2009 and 2011, the WISE telescope conducted two all-sky surveys of the sky in infrared light. It captured millions of images of the sky. All the data from the mission were released publicly. Now astronomers are using the WISE data to make new discoveries, such as this one.

The image above zooms in on an area of our sky about three times larger than a full moon. The black hole candidates – which might be powering quasars – are highlighted with yellow circles.

The astronomers say these findings are helping them understand how galaxies and supermassive black holes at their centers grow and evolve together.

Read more about this story from NASA.