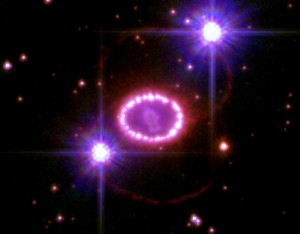 Supernova 1987A was the closest exploding star seen in modern times. It occurred in the Large Magellanic Cloud, a small galaxy that orbits our own Milky Way. Images taken by NASA’s Hubble Space Telescope were combined to make this composite of the blast’s expanding debris. Credit: NASA / ESA / P. Challis and R. Kirshner (Harvard-Smithsonian Center for Astrophysics)

Thank you! Your submission has been received!
Oops! Something went wrong while submitting the form.
END_OF_DOCUMENT_TOKEN_TO_BE_REPLACED