There’ve been hints in the past that this type of misaligned system exists, but this is the cleanest and most striking example, astronomers say. 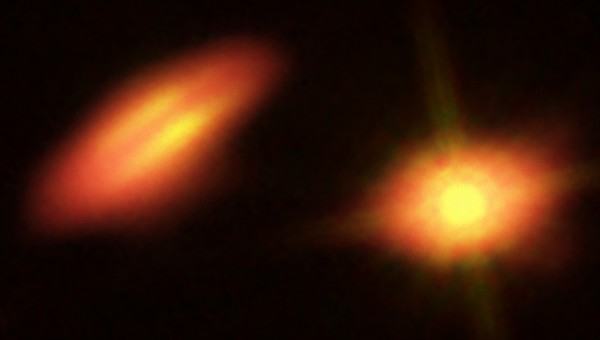 Here is the double star system HK Tau, as seen in both optical and infrared. The star-forming disks of this double star system are oriented oddly with respect to mutual orbit of the two stars. Image via B. Saxton (NRAO/AUI/NSF); K. Stapelfeldt et al. (NASA/ESA Hubble) 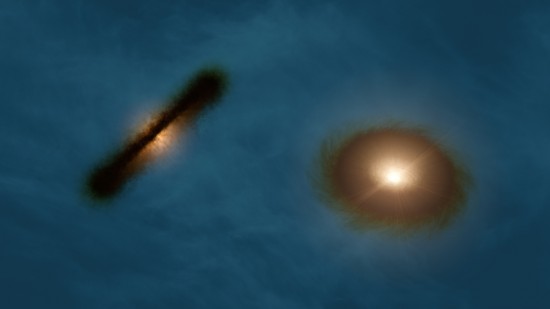 Astronomers have contemplated planets forming in single flat disks, as in our own solar system, for decades. Misaligned planet disks in a binary star system? Weird! But now they’ve found the best example so far, in the course of conducting a survey of binary stars with the Atacama Large Millimeter/submillimeter Array (ALMA) in Chile. The young binary star system is called HK Tau. It consists of two stars orbiting a common center of mass. In a system like this, you might imagine any planet-forming disks to be surrounding the two stars, in the same plane as their orbits around each other. But that’s not the case here. In this system, the disks are misaligned – they’re out of sync with the mutual orbit of their host stars – by as much as 60 degrees or more.

And as a result, said astronomer Eric Jensen of Swarthmore College in Pennsylvania:

… we may be seeing the formation of a solar system that may never settle down.

Stars and planets form out of great clouds of dust and gas in space. As material in these clouds contracts under gravity, it begins to rotate. Eventually, most of the dust and gas falls into a flat disk swirling around the central protostar. It’s from these protoplanetary disks that planets like our own Earth are thought to form.

Astronomers say that studying the disks of the two stars in the HK Tau system will help us understand our own solar system’s formation better. Their next step, the researchers say, is to determine if this type of system is typical or not. They note that this is a remarkable individual case, but additional surveys are needed to determine if this sort of arrangement is common throughout our Milky Way galaxy.

The two stars in this system are located approximately 450 light-years from Earth in the direction of our constellation Taurus. The two stars are separated by about 58 billion kilometers, or 13 times the distance of Neptune from our sun.

They are less than 5 million years old, in contrast to some four-and-a-half billion years for our sun.

Rachel Akeson of the NASA Exoplanet Science Institute at the California Institute of Technology in Pasadena, California said:

This clear misalignment has given us a remarkable look at a young binary star system. Though there have been hints before that this type of misaligned system exists, this is the cleanest and most striking example.

Read more about the misaligned disks in the HK Tau system, from NRAO.