Remember the Camelopardalids, the meteor shower earlier this year astronomers said would be spectacular … except it wasn’t? Now, the same astronomers explain why. 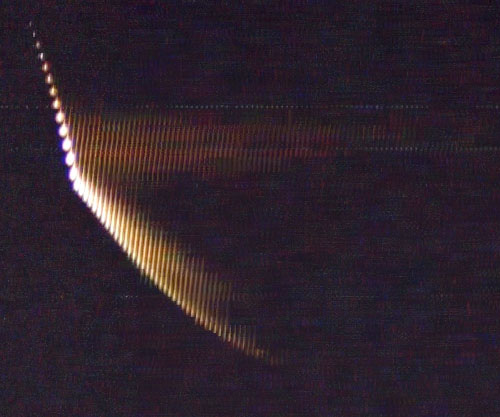 Frame-by-frame development of a Camelopardalid on 2014 May 24. Scientists who studied the meteors said they ‘dispersed into a cloud of dust.’ Illustration via Peter C. Slansky, Jim Albers and Peter Jenniskens.

Okay, here’s what they say. Peter Jenniskens, a meteor astronomer with the SETI Institute, together with colleague Esko Lyytinen, first predicted 10 years ago that a new shower would appear on May 24, 2014. As we observers know, the shower did materialize, but it was not spectacular. Now they say that an analysis of airborne and ground-based observations published in the latest issue of the Journal of the International Meteor Organization finds that dust from Comet 209P/LINEAR was unusually fragile, and had fallen apart into undersized meteors that were largely invisible. Jenniskens said:

Some mechanism was at work that efficiently fragmented the larger meteoroids.

On the night of May 23-24, 2014 – the night predicted for the shower’s peak – Jenniskens said his research team tried to observe the shower from the air, in a Beechcraft King Air 90 aircraft. In a little over two hours, they said, they detected 21 Camelopardalids, predominantly faint meteors. That’s a wimpy meteor shower in anybody’s book, but especially after the big build-up about this shower in early 2014. Jenniskens said:

Our best meteor was no more luminous than the star Vega, but it gave us a clue as to why there were few bright ones. It was so fragile that the meteoroid suddenly dispersed into a cloud of dust at the end of its trajectory.

We are not sure yet what destroyed the larger meteoroids in this case.

The meteoroids may have simply been too frail to survive ejection, or the larger meteoroids could have been lost in the many years since they were ejected.

They say one explanation for the lack of large meteoroids is that they failed to survive the harsh conditions of space. The cometary dust encountered by Earth during May was more than a century old. Jenniskens said:

We may have been just a few centuries late in catching a good show. The shower we saw was just a faint memory of what once was there.

Now we know. Personally, I intend to forget the Camelopardalids and go back to thinking about two more reliable showers – the Perseids and Delta Aquarids – gearing up now for a possible nice display over the coming weeks, starting around this weekend.

Bottom line: The Camelopardalid meteors – which were supposed to give us a spectacular shower on the night of May 23-24, 2014 – might have been too fragile to do so, scientists say.