Objects in space aren’t the same size, but why not? A scientist used a theory he formulated earlier – to explain patterns in nature on Earth – to suggest a reason. 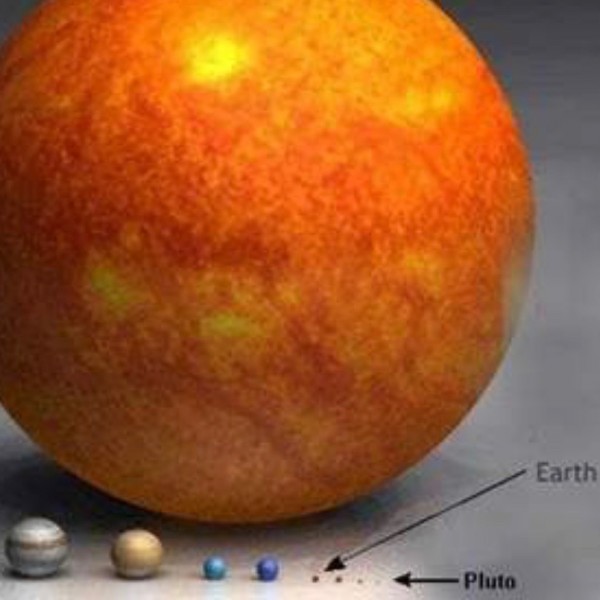 You’ve seen illustrations like this one, showing the relative sizes of things in space? This one is from www.rense.com, where you can see more like this. Also, be sure to check out the videos below.

A professor of mechanical engineering at Duke has applied a theory he formulated in 1996 – called Constructal Law, related to the way that patterns in nature are generated – to the hierarchical array of sizes of space objects. In other words, why do objects in space come in different sizes, from mighty stars with over 1,000 times the diameter of our sun, to little chunks of rocks like those that sometimes enter Earth’s atmosphere and makes bright streaks across our sky? Why isn’t everything the same size?

Adrian Bejan at Duke University used his earlier theory to determine a possible reason. He says it’s because:

… a universe that contains some big objects and many small objects relieves gravitational tension faster than a uniform universe.

He and his team report their finding in the Journal of Applied Physics.

So … what does it mean? Bejan’s specialty is in thermodynamics, which describes how different forms of energy affect each other and the matter around them. His Constructal Law, which he’s worked on for years and which isn’t accepted by all scientists but which has a certain logic and beauty about it, is all about flow. It states that natural systems evolve to facilitate flow. So, for example:

Raindrops coalesce and move together, generating rivulets, streams and the mighty river basins of the world because this design allows them to move more easily.

That’s raindrops and water. How about solid bodies in space and their array of different sizes? Bejan and his student, Russell Wagstaff, started by calculating the tension caused by gravitational attraction between bodies of the same size, uniformly distributed in space.

They showed that if the bodies coalesce into some large bodies and some small bodies, the tension is reduced faster than if the bodies merged uniformly.

Bejan says this break-up of the uniform suspension of bodies into a few large and many small bodies occurs because it’s the fastest way to ease the internal tension caused by gravity. In other words, it happens because – in our particular universe, with our particular nature working as it does – it’s the easiest thing that can happen .Bean commented:

I never thought I would have anything to say about celestial bodies in pure physics, but by chance I realized I have a key to open a new door.

Want to read ore about gravitational tension? The physics gets very advanced very quickly, but here’s a place to start.

The next film is interesting, too, and shows the relative sizes of major planets in our solar system, plus the sun and other stars in the universe.

Bottom line: Objects in space aren’t the same size, but why not? A scientist has used a theory he formulated earlier – to explain patterns in nature on Earth – to suggest a reason.