Posted by Deborah Byrd and Eleanor Imster in Science Wire | Space | May 9, 2016

Earlier this year, scientists presented evidence for a Planet Nine in the far outer solar system. Scientists think it exists, but – if so – how did it get there? 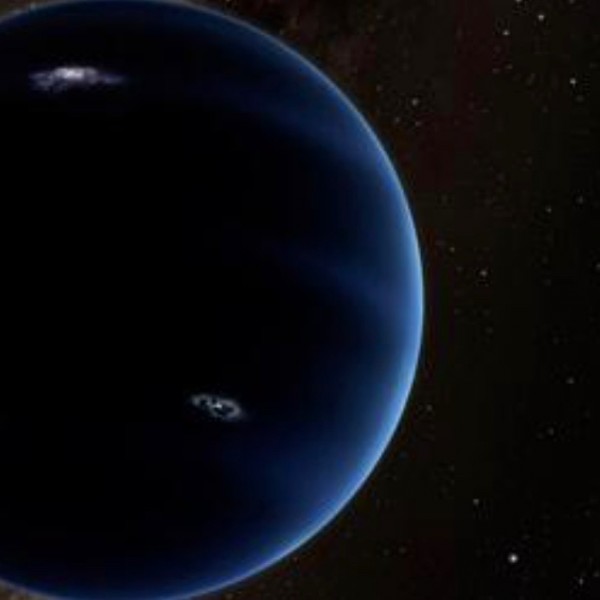 Artist’s conception of Planet Nine, in the far outer solar system. In this image, the star in the lower right is our sun. Image via Caltech/R. Hurt (IPAC)

In January, 2016, scientists from Caltech said they now have solid theoretical evidence for a giant planet – a 9th major planet in the outer solar system – moving in what they called a bizarre, highly elongated orbit in the far outer solar system. If it exists, this Neptune-mass planet would be in an elliptical orbit 10 times farther from our sun than Pluto. In the months since then, theoretical astronomers have tried to figure how one of our sun’s large planets could end up in such a distant and strange orbit. This month, after examining a number of scenarios, astronomers at the Harvard-Smithsonian Center for Astrophysics (CfA) said they still aren’t sure.

CfA astronomer Gongjie Li is lead author of one of the papers, which has been accepted for publication in the Astrophysical Journal Letters. She said:

The evidence points to Planet Nine existing, but we can’t explain for certain how it was produced.

Planet Nine – which has not been discovered, and so far exists only in theory – is believed to orbit our sun at a distance of about 40 billion to 140 billion miles. That’s about 400 – 1,500 Earth-sun distances. That distance would place it far beyond all the other planets in our solar system. According to the Cfa astronomers’ statement, the question becomes:

The researchers led by Li conducted millions of computer simulations in order to examine three possibilities. First, let’s consider the two wilder and less likely ones. First, Planet Nine might be an exoplanet captured from a passing star system. Second, it might be a free-floating planet captured when it drifted close by our solar system. However, Li’s team concluded, the chances of either of those two scenarios are less than 2 percent. That leaves us with the third possibility, that Planet 9 formed within our solar system and was somehow tugged outward:

The … most likely involves a passing star that tugs Planet Nine outward. Such an interaction would not only nudge the planet into a wider orbit but also make that orbit more elliptical.

And since the sun formed in a star cluster with several thousand neighbors, such stellar encounters were more common in the early history of our solar system.

However, an interloping star is more likely to pull Planet Nine away completely and eject it from the solar system. Li and Adams find only a 10 percent probability, at best, of Planet Nine landing in its current orbit.

Moreover, the planet would have had to start at an improbably large distance to begin with.

CfA astronomer Scott Kenyon and colleagues examined the third scenario more closely. They carried out computer simulations of a Planet 9 forming in a wide orbit, essentially as an extra gas giant in our solar system. His team explored whether Planet Nine might have formed much closer to the sun and then interacted with the other gas giants, particularly Jupiter and Saturn. Over time, a series of gravitational kicks might have boosted the planet into a larger and more elliptical orbit. Kenyon said:

Think of it like pushing a kid on a swing. If you give them a shove at the right time, over and over, they’ll go higher and higher. Then the challenge becomes not shoving the planet so much that you eject it from the solar system.

That could be avoided by interactions with the solar system’s gaseous disk, he said.

Kenyon’s team also examined the possibility that Planet Nine actually formed at a great distance to begin with. They find that the right combination of initial disk mass and disk lifetime could potentially create Planet Nine in time for it to be nudged by Li’s passing star. Kenyon said:

The nice thing about these scenarios is that they’re observationally testable. A scattered gas giant will look like a cold Neptune, while a planet that formed in place will resemble a giant Pluto with no gas.

In other words, assuming Planet 9 is found someday – and as astronomers begin to analyze its light – we’ll know more.

Read more: Why Planet Nine might be for real

Bottom line: Although it hasn’t yet been discovered, astronomers believe there’s strong theoretical evidence that a Planet 9 exists far from our sun. They’re not sure how this large planet ended up in such a distant orbit, but recent computer simulations offer some possibilities.