Why does this brown dwarf have such strangely red skies ?

Brown dwarfs straddle the line between stars and planets. This one caught researchers’ attention for its extremely red appearance. Turns out its atmosphere is laden with dust. 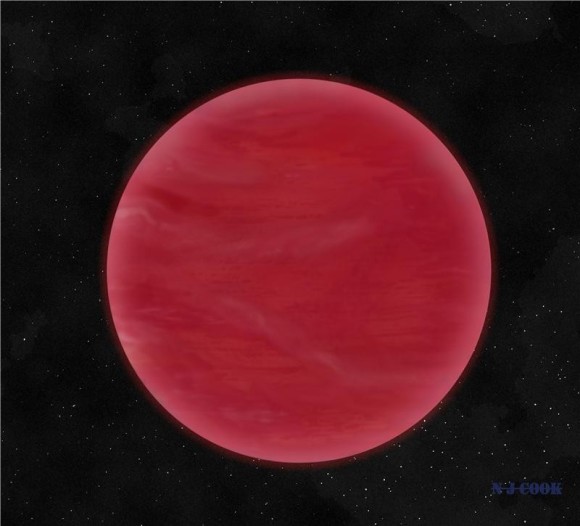 A peculiar example of a celestial body, known as a brown dwarf, with unusually red skies has been discovered by a team of astronomers from the University of Hertfordshire’s Centre for Astrophysics Research.

Brown dwarfs straddle the line between stars and planets. They are too big to be considered as planets; yet they do not have sufficient material to fuse hydrogen in their cores to fully develop into stars. They are midway in mass between stars, like our sun, and giant planets, like Jupiter and Saturn. Sometimes described as failed stars, they do not have an internal source of energy – so they are cold and very faint, and keep on cooling over time.

The brown dwarf, named ULAS J222711-004547, caught the researchers’ attention for its extremely red appearance compared to “normal” brown dwarfs. Further observations with the VLT (Very Large Telescope) in Chile and the use of an innovative data analysis technique have shown that the reason for its peculiarity is the presence of a very thick layer of clouds in its upper atmosphere.

Federico Marocco, who led the research team from the University of Hertfordshire, said: “These are not the type of clouds that we are used to seeing on Earth. The thick clouds on this particular brown dwarf are mostly made of mineral dust, like enstatite and corundum.

“Not only have we been able to infer their presence, but we have also been able to estimate the size of the dust grains in the clouds.”

The size of the dust grains influences the color of the sky. In a similar way that the old saying of “Red sky at night, shepherd’s delight. Red sky in the morning, shepherd’s warning” is used at sunrise and sunset to indicate the changing weather, a red sky on the brown dwarf suggests an atmosphere loaded with dust and moisture particles. If our morning skies are red, it is because clear skies to the east permit the sun to light the undersides of moisture-bearing clouds coming in from the west. Conversely, in order to see red clouds in the evening, sunlight must have a clear path from the west in order to illuminate moisture-bearing clouds moving off to the east.

However, the recently discovered brown dwarf ULAS J222711-004547 has a very different atmosphere where the sky is always red.

The giant planets of the Solar System, like Jupiter and Saturn, show various cloud layers including ammonia and hydrogen sulphide as well as water vapour. The atmosphere observed in this particular brown dwarf is hotter – with water vapour, methane and probably some ammonia but, unusually, it is dominated by clay-sized mineral particles.
Extreme atmospheres

Getting a good understanding of how such an extreme atmosphere works will help us to better understand the range of atmospheres that can exist.

Dr Avril Day-Jones, from the University of Hertfordshire’s Centre for Astrophysics Research, who contributed to the discovery and analysis said: “Being one of the reddest brown dwarfs ever observed, ULAS J222711-004547 makes an ideal target for multiple observations to understand how the weather is in such an extreme atmosphere.”

“By studying the composition and variability in luminosity and colours of objects like this, we can understand how the weather works on brown dwarfs and how it links to other giant planets.”

Via University of Hertfordshire