Why does the sun shine?

The sun generates about 400 billion billion megawatts of power and it has done so for five billion years. Nuclear fusion – combining lighter atoms to make heavier one – is what makes it possible.

The sun generates about 400 billion billion megawatts of power, and it has done so for five billion years. What energy source is capable of this sort of power? Remarkably, the engine of the mightiest stars is not something immense, but rather something very small: tiny building blocks of atoms smashing together at high speeds. With every collision, a spark of energy is released. Nuclear fusion, the blending of atomic nuclei to form new elements, is what drives entire galaxies of stars. 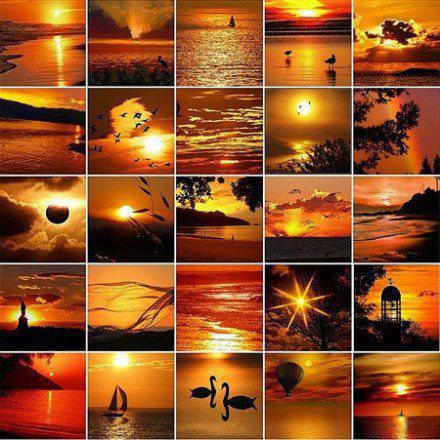 This mosaic was created by EarthSky Facebook friend Corina Wales. Thank you Corina!

The nuclei of atoms are conceptually simple. They consist of only two types of particles: protons and neutrons. The number of protons determines the type of atom; it’s what distinguishes helium, carbon, and sulfur. The neutrons hold the positively charged protons together. Without the neutrons, the like charges would send the protons flying apart.

Heavier atoms, like neon, can be assembled by fusing together lighter atoms, like helium. When that happens, energy is released. How much energy? If you were to fuse all the hydrogen in a gallon of water into helium, you’d have enough energy to power New York City for three days.

Now imagine if you had an entire star’s worth of hydrogen! 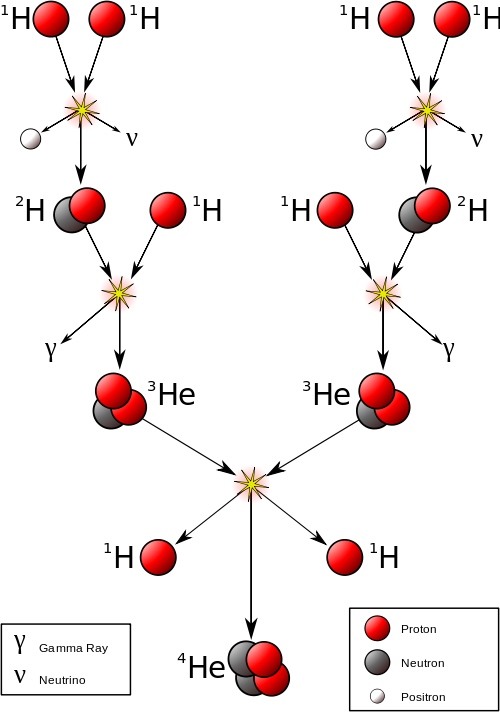 The steps in one of the paths that four hydrogen nuclei take to fuse one helium nuclei. At each step, energy is emitted as gamma rays. Credit: Wikipedia user Borb.

The trick to getting atoms to fuse is having extremely high temperature and density. Under the pressure of a few octillion tons of gas, the sun’s center is heated to about 10 million degrees Celsius. At that temperature, the bare protons of a hydrogen nucleus are moving fast enough to overcome their mutual repulsion.

Through a series of collisions, the intense pressure at the sun’s core continually fuses four protons together to form helium. With every fusion, energy is released into the stellar interior. Millions of these events occurring each second produces enough energy to push back against the force of gravity and keep the star in balance for billions of years. The released gamma rays follow a tortuous path higher and higher through the star until eventually emerging from the surface, millions of years later, in the form of visible light.

But this can’t continue forever. Eventually the hydrogen is depleted as an inert core of helium builds up. For the smallest stars, this is the end of the line. The engine turns off and the star quietly fades into the darkness.

A more massive star, like our sun, has other options. As the hydrogen fuel runs out, the core contracts. The contracting core heats up and releases energy. The star balloons into a “red giant”. If the core can reach a high enough temperature—approximately 100 million degrees Celsius—the helium nuclei can begin fusing. The star enters a new phase of life has helium is transformed into carbon, oxygen, and neon.

The star now enters a cycle where the nuclear fuel is depleted, the core contracts, and the star balloons. Each time, the core heating kicks off a new round of fusion. How many times the star loops through these steps depends entirely on the mass of the star. More mass can produce more pressure and drive ever higher temperatures at the core. Most stars, like our sun, cease after producing carbon, oxygen, and neon. The core becomes a white dwarf and the outer layers of the star are driven off into space.

But stars that are a couple of times more massive than the sun can keep going. After the helium is used up, the core contraction produces temperatures approaching one billion degrees. Now, the carbon and oxygen can start fusing to form even heavier elements: sodium, magnesium, silicon, phosphorous, and sulfur. Beyond this, the most massive stars can heat their cores to several billion degrees. Here, a bewildering array of options are available as silicon fuses through a complex reaction chain to form metals like nickel and iron. Only a few stars get this far. It takes a star with the mass of more than eight suns to form iron.

The inside of a red giant star in the moments before exploding as a supernova. The products of the various nuclear fusion reactions are stacked like the layers of an onion. The lightest elements (hydrogen) remain near the star’s surface while the heaviest (iron and nickel) form the stellar core. Credit: NASA (via Wikipedia)

Once a star produces a core of iron or nickel, however, there aren’t any options left. At every stage along this journey, fusion has released energy into the stellar interior. To fuse with iron, on the other hand, robs energy from the star. At this point, the star has consumed all usable fuel. Without a nuclear energy source, the star collapses. All the layers of gas come crashing down to the center which stiffens in response. An exotic neutron star is born in the core and the onrushing mass, with no where else to go, rebounds off the incompressible surface. Wildly out of balance, the star blows apart in a supernova—one of the most cataclysmic singular events in the universe. In the chaos of the explosion, atomic nuclei begin capturing single protons and neutrons. Here, in the fires of a supernova, the rest of the elements in the universe are created. All the gold in all the wedding bands in the world can only have come from one place: a nearby supernova that ended one star’s life and most likely triggered the formation of our solar system five billion years ago. 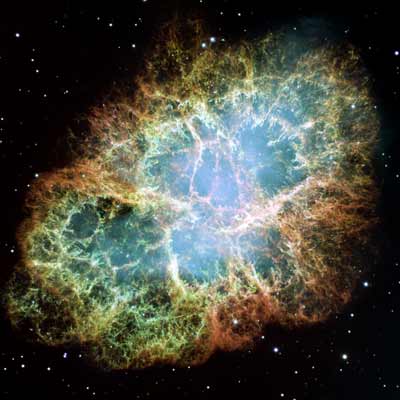 The Crab Nebula is the remnant of a supernova seen from Earth one thousand years ago. Located 6500 light-years away in the constellation Taurus, the Bull, the remnant is 11 light-years across and expanding at about 1500 km/s! Credit: NASA, ESA, J. Hester and A. Loll (Arizona State University)

It is a remarkable fact that the largest of stars are fueled by the smallest of things. All the light and energy in our universe is the result of atoms being built in the cores of stars. The energy released every time two particles fuse together, combined with trillions of other ongoing reactions, is enough to power a single star for billions of years. And every time a star dies, those new atoms are released into interstellar space and carried along galactic streams, seeding the next generation of stars. Everything that we are is the result of thermonuclear fusion in the heart of a star. As Carl Sagan once famously quipped, we truly are star stuff.