Researchers fired laser beams onto a plastic foil to mimic some of the conditions comets encounter as they travel through our solar system and to solve a long-standing mystery. 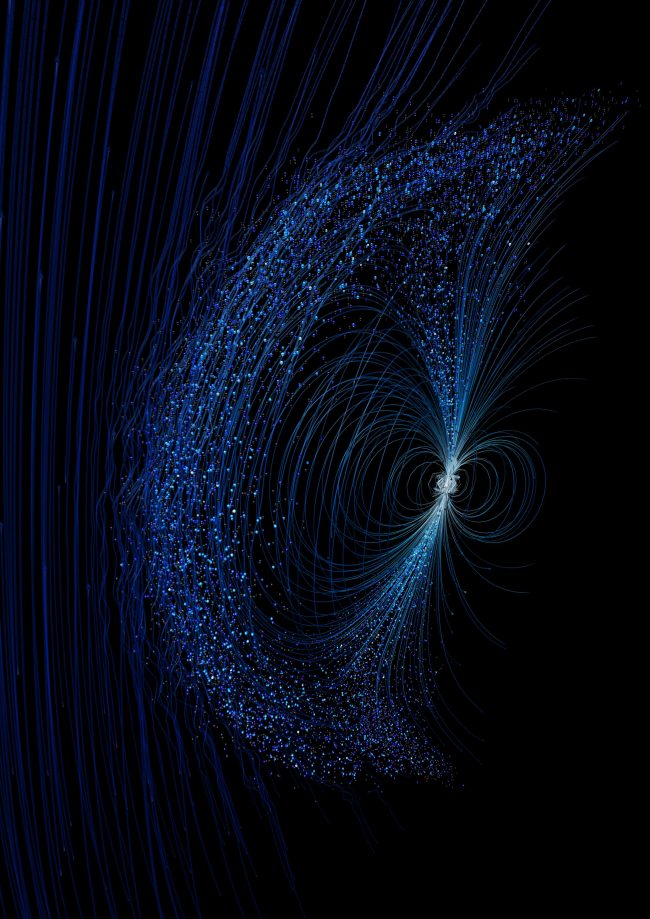 This bow shock was generated in a laboratory in a magnetized plasma-obstacle interaction, like the one used to solve the mystery of why comets emit X-rays. Image via F. Cruz and L. O. Silva, IST Lisbon, Portugal/ University of Oxford.

Scientists from 15 institutes, led by the University of Oxford in the U.K., announced today (March 20, 2018) that they’ve solved the mystery of why comets emit X-rays. Very hot objects like the sun emit X-rays, but comets aren’t hot. In fact, they’re sometimes described as dirty snowballs and are among our solar system’s coldest objects. So what’s the mechanism for X-rays from comets?

The answer comes from experiments performed at the LULI laser facility in Paris, where, these scientists say, they were able to replicate the interaction of comets with the solar wind. The new study is published in the peer-reviewed journal Nature Physics. These scientists’ statement explained:

When comets travel through the solar system they interact with solar radiation, the solar wind and the solar magnetic field. This produces a visible atmosphere or coma as well as the observed cometary tail, and in some cases, X-rays. These are generated on the sunward side of the comet where the solar wind impacts the cometary atmosphere, forming a bow shock.

Alexandra Rigby, an Oxford University student, led the experiment as part of her doctoral research. She explained:

The laser beams are fired onto a plastic foil which explodes, causing a stream of electrons and ions to be expelled forming a high speed flow of ionized gas (plasma) like the solar wind.

To replicate a “comet” in the lab, the researchers placed a solid sphere of material about 1 centimeter (0.4 inches) away from the plastic foil. The result, they said, mimicked conditions comets encounter while traveling through our solar system. It was found that electrons are heated to about a million degrees Celsius (about 1.8 million degrees Fahrenheit) in the upstream region by plasma turbulence. Their statement explained:

These hot electrons are responsible for emitting X-rays in the presence of a magnetic field.

These experimental results provide direct laboratory evidence that objects moving through magnetized plasmas can be sites of electron heating. This process is common in astrophysics and can take place not only in comets, but also in planetary magnetospheres (as of our own Earth), or even in supernova remnants where the ejected material sends a shock wave into the interstellar gas.

The scientists expressed satisfaction that they can now replicate astrophysical phenomena like this one in the laboratory and, thereby, to solve long-standing mysteries, like the mystery of X-rays from comets.

Artist’s concept of a comet, the Earth and our sun, via University of Oxford.

Bottom line: X-rays come from very hot objects, and comets are cold. Yet comets emit X-rays. Researchers used lasers in a laboratory setting to find out why.

Source: Electron acceleration by wave turbulence in a magnetized plasma