Why are these black hole jets aligned?

The only way for this alignment to exist is if the supermassive black holes in this part of space are all spinning in the same direction. 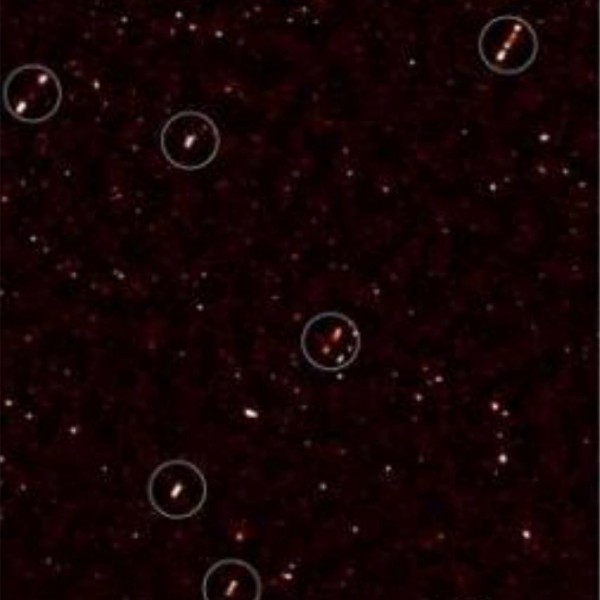 Astronomers have circled galaxies in this deep-sky radio image, whose central supermassive black holes have jets that are aligned. Image via Andrew Russ Taylor.

Our universe is a curious place, and here’s a curious piece of research, albeit one for which astronomers believe they have the beginnings of an explanation. Astronomers in South Africa who are engaged in deep sky radio imaging – that is, acquiring images of the distant universe at the radio end of the spectrum – have learned that supermassive black holes in a particular region of space all have radio jets aligned in the same direction. The only way for this alignment to exist, they say, is if the supermassive black holes are all spinning in the same direction. Andrew Russ Taylor, lead author on a paper being published in Monthly Notices of the Royal Astronomical Society, said in a statement:

Since these black holes don’t know about each other, or have any way of exchanging information or influencing each other directly over such vast scales, this spin alignment must have occurred during the formation of the galaxies in the early universe.

That makes sense. After all, according to observations of our expanding universe and to Big Bang theory, there was a time when everything in the universe was closer together than it is now. These astronomers point to primordial mass fluctuations – density variations in the otherwise-homogenized stuff of the early universe. These tiny variations are thought to have become the seeds for all the later structure (the galaxies, and clusters of galaxies) we see around us today.

Somehow, in that early universe, something happened to make these galaxies and their central black holes spin the same way. The astronomers’ statement explained:

So what could these large-scale environmental influences during galaxy formation or evolution have been? There are several options: cosmic magnetic fields; fields associated with exotic particles (axions); and cosmic strings are only some of the possible candidates that could create an alignment in galaxies even on scales larger than galaxy clusters.

But, say these astronomers – who are at the University of Cape Town and University of the Western Cape in South Africa – this is the first time they’ve seen supermassive black hole jets aligned over such a large volume of space. They’re talking about scales of up to 100 megaparsecs (a little over 300 million light-years). They call this particular region of space ELAIS-N1, and they’re studying it as part of a three-year deep radio imaging survey, using the Giant Metrewave Radio Telescope (GMRT) in India.

Did they expect this result? No. Their statement said:

A large-scale spin distribution has never been predicted by theories – and an unknown phenomenon like this presents a challenge that theories about the origins of the universe need to account for, and an opportunity to find out more about the way the cosmos works.

Romeel Dave of University of the Western Cape agrees. Dave leads a team developing plans for universe simulations that could explore the growth of large-scale structure from a theoretical perspective. He said:

This is not obviously expected based on our current understanding of cosmology. It’s a bizarre finding.

Bottom line: South African astronomers conducting a three-year survey of the distant universe at radio wavelengths have images of supermassive black hole jets in a particular region of space that are all aligned in the same direction. The only way for this alignment to exist is if the supermassive black holes in this part of space are all spinning in the same direction.