These 2 dead stars whip around each other in minutes

The newfound dynamic duo of white dwarfs- called ZTF J1539+5027 – orbit each other every 7 minutes.

Two dead stars have been spotted whipping around each other every seven minutes. The newfound dynamic duo, officially known as ZTF J1539+5027, is the second-fastest pair of orbiting dead stars, called white dwarfs, yet discovered.

The pair, located nearly 8,000 light-years away in the Boötes constellation, is also the fastest eclipsing binary system, meaning that one white dwarf repeatedly crosses in front of the other from our point of view.

Astronomers at Palomar Observatory, near San Diego, California, found the pair of stars using Caltech’s Zwicky Transient Facility (ZTF), a state-of-the-art sky survey that rapidly scans the night skies looking for anything that moves, blinks, or otherwise varies in brightness.

The stars of the newly-discovered pair orbit each other roughly every seven minutes. When the larger, cooler star passes in front of, or eclipses, the smaller, hotter star, the light of the smaller star is blocked. To astronomers observing the system, the pair appears to vanish for around 30 seconds during the eclipsing phase of their orbit. 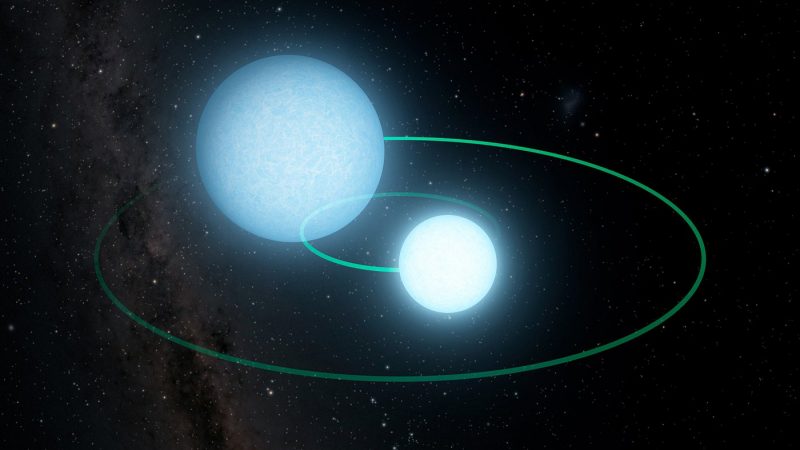 According to the astronomers’ observations, each of the newfound white dwarfs is roughly the size of Earth, with one being a bit smaller and brighter than the other, and together they weigh as much as our sun. The two objects orbit very closely to each other, at one-fifth the distance between Earth and the moon; in fact, the orbiting stars would fit inside the planet Saturn. And they whip around each other every seven minutes at speeds of hundreds of kilometers per second.

Caltech graduate student Kevin Burdge is lead author of a study about the stars, published July 25, 2019, in the peer-reviewed journal Nature. Burdge said in a statement:

As the dimmer star passes in front of the brighter one, it blocks most of the light, resulting in the seven-minute blinking pattern we see in the ZTF data. Matter is getting ready to spill off of the bigger and lighter white dwarf onto the smaller and heavier one, which will eventually completely subsume its lighter companion. We’ve seen many examples of a type of system where one white dwarf has been mostly cannibalized by its companion, but we rarely catch these systems as they are still merging like this one.

The team of astronomers spotted the white dwarf pair with ZTF’s large 576-megapixel camera, which rapidly scans the entire sky every three nights, and the bulk of the plane of the Milky Way every night. Burdge found ZTF J1539+5027 by running a computer program that tracked 10 million cosmic objects, looking for changes over a three-month span. He said:

This pair really stuck out because the signal repeats so often and in such a predictable way. People haven’t been able to systematically search for things that change on minute-time scales before. ZTF lets us do this because its camera is huge and it can easily take pictures across the sky and then come back and repeat.

Burke said that the white dwarfs began their lives as stars like our sun, except they were bound together as a tight-knit pair. As the stars aged, they swelled up into red giants, one after the other. Over time, the swollen stars shed their outer layers, leaving behind two dead stars – the white dwarfs.

Study co-author Jim Fuller is an assistant professor of theoretical astrophysics at Caltech. He said:

Sometimes these binary white dwarfs merge into one star, and other times the orbit widens as the lighter white dwarf is gradually shredded by the heavier one. We’re not sure what will happen in this case, but finding more such systems will tell us how often these stars survive their close encounters.

The team says that the white-dwarf duo should keep blinking in the night sky for a hundred thousand years to come. Even amateur astronomers may be able to see the pair as one spot on the sky, flashing every seven minutes, with the help of a telescope at least one meter (39 inches) in size.

Bottom line: Astronomers have spotted a pair of white dwarfs- called ZTF J1539+5027 – orbit each other every 7 minutes. It’s the 2nd fastest pair of orbiting dead stars spotted so far.