Where are Ceres’ large craters?

There’s a curious lack of big craters on the dwarf planet Ceres, largest body in the asteroid belt between Mars and Jupiter. Why?

NASA’s Dawn spacecraft is the only craft yet sent from Earth toward two different space destinations. Dawn orbited the asteroid Vesta in 2011-2012, and now it’s in orbit exploring a second world in the asteroid belt, the dwarf planet Ceres. It was natural for scientists to expect Dawn to find Ceres as heavily cratered as Vesta is. After all, both are located more or less at the same distance from our sun. Both presumably were subject to a bombardment of debris early in our solar system’s history. But, as Dawn revealed Ceres’ surface, scientists realized that something must have happened on Ceres to remove its biggest impact basins.

A team of Dawn scientists led by Simone Marchi of the Southwest Research Institute in Boulder, Colorado, has created computer simulations of Ceres’ collision history, trying to explain its lack of large craters. The new work was published July 26, 2016 in the journal Nature Communications. The team’s simulations predicted that the dwarf planet should have 10 to 15 craters larger than 250 miles (400 km) in diameter, and at least 40 craters larger than 60 miles (100 km) wide.

Where are Ceres’ large craters? 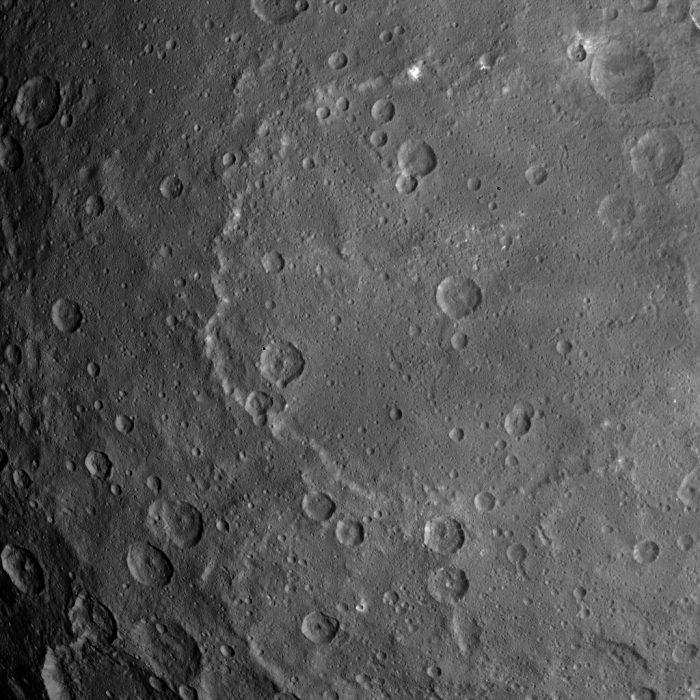 The largest impact basin on Ceres, Kerwan Basin, via NASA’s Dawn spacecraft at an altitude of 2,700 miles (4,400 km). Image via NASA.

The work suggests that Ceres, though a small world, has undergone geologic evolution, a smoothing of its surface. Scientists say the lack of craters suggests a mix of ice and clay below Ceres’ surface. This slushy mixture might have permitted a “relaxing” of the surface that may have erased its large impact basins.

In addition, it’s possible Ceres has generated some internal heat from the decay of radioactive elements after it formed. This too could also have helped soften or erase large-scale topographic features.

David Williams of Arizona State University (ASU) is a member of the Dawn team. He said in a statement:

When we first starting looking at Ceres images, we noticed that there weren’t any really large impact basins on the surface. Even Vesta, only about half of Ceres’ size, has two big basins at its south pole.

But at Ceres, all we saw was the Kerwan Basin, just 177 miles in diameter. That was a big red flag that something had happened to Ceres. 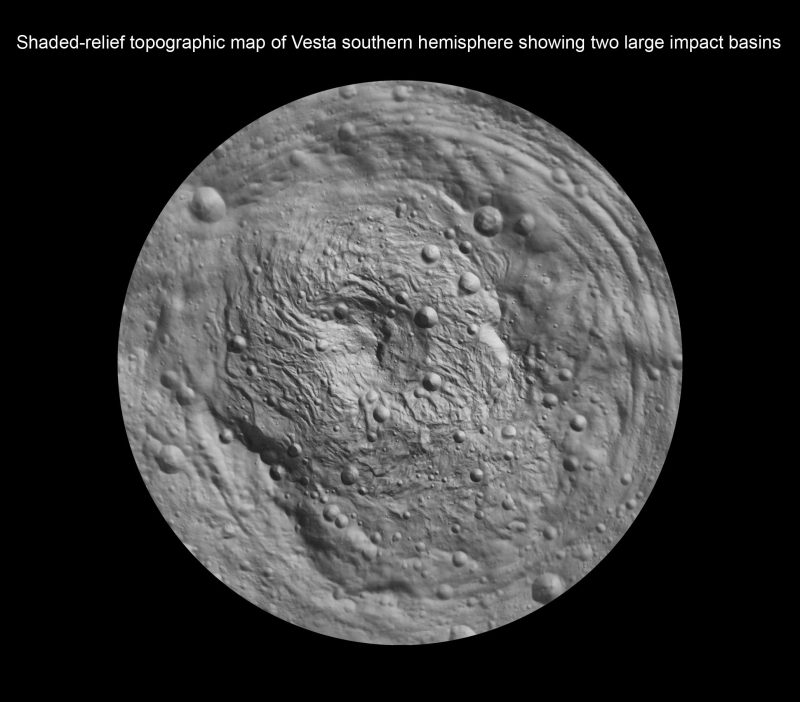 Vesta is half Ceres’ size, but has at least 2 large impact basins in its southern hemisphere. Scientists call them Rheasilvia and Veneneia. Image via NASA.

Williams also said that there’s evidence on Ceres of the action of ice volcanos:

… in the bright spots found scattered over Ceres, especially in Occator Crater.

Ice volcanoes – called cryovolcanoes by scientists – may erupt on Ceres much as earthly volcanoes erupt. But, instead of molten lava, they erupt with “molten ice:” water or brine. Williams said:

It’s possible that there are layers or pockets of briny water in the crust of Ceres. Under the right conditions, these could migrate to the surface and be sources for the bright spots.

For example, he said, in Occator Crater, which contains the famous Spot 5, the brightest of Ceres’ bright spots:

… the central bright spot is a domed feature which looks as if it has erupted or been pushed up from below.

NASA plans for Dawn to continue orbiting Ceres as the dwarf planet makes its closest approach to the sun in April, 2018. Scientists want to see if the increasing solar warmth triggers any activity or produces detectable changes in Ceres’ surface.

If it does, that will be interesting! 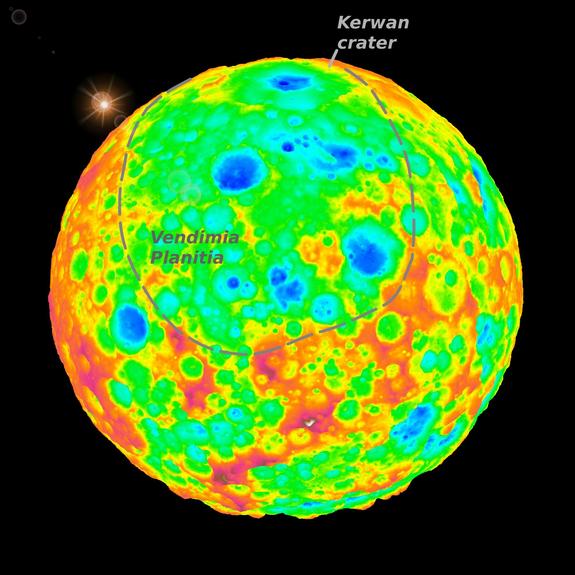 Bottom line: Dwarf planet Ceres doesn’t have as many large impact basins as scientists expect. They think a slushy layer of ice and clay below Ceres’ surface – and other factors causing geologic evolution on the little world’s surface – are responsible.