When and how it rains on the sun

Rain takes different forms on the planets and moons of our solar system. But it also “rains” on the sun, as electrified gas drips from giant magnetic loops in the sun’s outer atmosphere. Read about the sun’s coronal rain.

Rain comes in various forms throughout the solar system – water on Earth, methane/ethane on Titan and sulfuric acid on Venus. But did you know it also rains on the sun? Well, kind of. Huge drops of plasma – electrified gas – can drip from prominences (giant magnetic loops of gas) in the sun’s outer atmosphere, the corona, onto the scorching surface. This unusual phenomenon, called coronal rain, was the focus of study of a NASA undergraduate student who wanted to document it better.

In a new peer-reviewed paper in Astrophysical Journal Letters – published on April 5, 2019 – Emily Mason at NASA’s Goddard Space Flight Center outlines how she found evidence for the coronal rain, but in an unexpected place.

When Mason first started searching for the evidence of coronal rain, she first looked at helmet streamers – million-mile-tall prominences named for their resemblance to a knight’s pointy helmet – seen protruding from the sun during a total solar eclipse. Computer simulations had suggested that would be the location most likely to have coronal rain. Mason searched for nearly half a year … but found no signs of the plasma rain, even though she had images taken by NASA’s Solar Dynamics Observatory (SDO), which has photographed the sun every 12 seconds since it was launched in 2010. As Mason said:

I probably looked through three or five years’ worth of data. It was a lot of looking, for something that never ultimately happened. 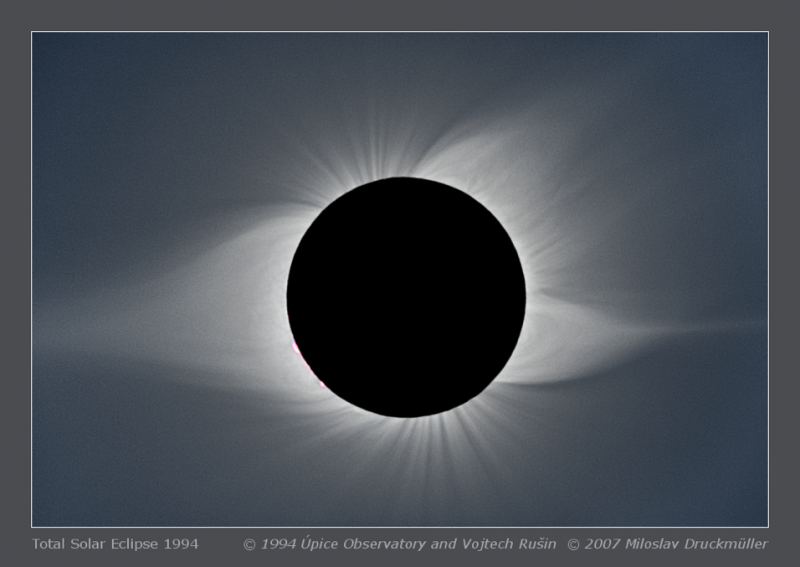 Giant loops of plasma gas on the sun, called helmet streamers. It was thought that the coronal rain would be found in them, but the search turned up empty. Image via Úpice Observatory/Vojtech Rušin (1994)/Miloslav Druckmüller (2007).

So where was it? It should be there, Mason knew. As it turned out, Mason and her colleagues had been looking in the wrong place. Instead of the helmet streamers, the rain was found in a smaller kind of magnetic loop on the sun. It was there, just not in the place that the researchers had expected to find it. The discovery should help scientists figure out the unusual heating of the sun’s corona and the source of the slow solar wind, two mysteries about the sun that still perplex scientists. The rain was observed as a slew of tiny magnetic structures, Mason said:

They were really bright and they kept drawing my eye. When I finally took a look at them, sure enough they had tens of hours of rain at a time.

As Spiro Antiochos, a solar physicist at Goddard and a co-author of the paper, explained:

These loops were much smaller than what we were looking for. So that tells you that the heating of the corona is much more localized than we were thinking. Maybe it [the coronal rain] is so small you can’t see it? We really don’t know.

As Nicholeen Viall, a solar scientist at Goddard, also noted, it took a while to recognize the structures for what they were:

She came to group meeting and said, ‘I never found it — I see it all the time in these other structures, but they’re not helmet streamers.’ And I said, ‘Wait … hold on. Where do you see it? I don’t think anybody’s ever seen that before!’ 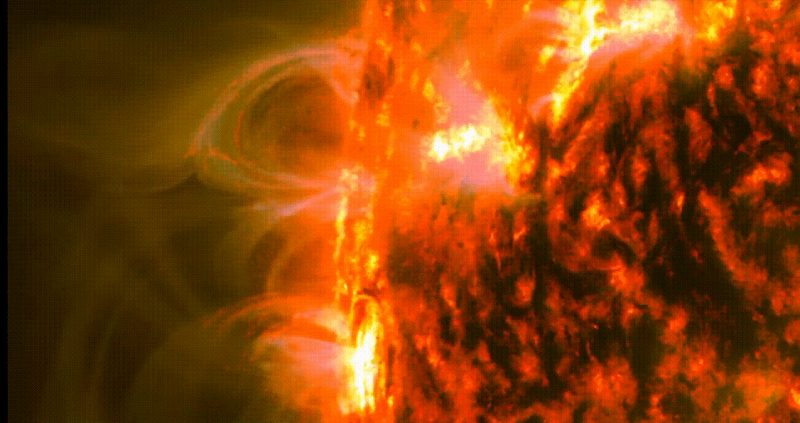 The coronal rain was found in smaller magnetic loops like these, the newly-found Raining Null-Point Topologies (RNTPs). Image via Solar Dynamics Observatory/Emily Mason.

So just how does this “rain” happen? In general terms, the process is similar to what occurs on Earth, Mason said:

But instead of 60-degree water you’re dealing with a million-degree plasma.

In Earth’s hydrological cycle, water evaporates on the surface and rises up into the atmosphere. It then cools and condenses into clouds, and when there is enough moisture in the clouds, it falls back to the surface as rain. Coronal rain is a somewhat similar process, but with a completely different composition of the rain itself.

As for helping to solve some of the sun’s mysteries, the coronal rain provides some clues.

Measurement of the gas in the slow solar wind – separate from the other fast-moving solar wind – indicated it had been heated to extreme degrees before cooling and escaping the sun. But how? If the process happened within the helmet streamers, then the cyclical process of heating and cooling behind coronal rain could explain that. But since the rain seems to happen more in the smaller loops, that idea may need some more work. 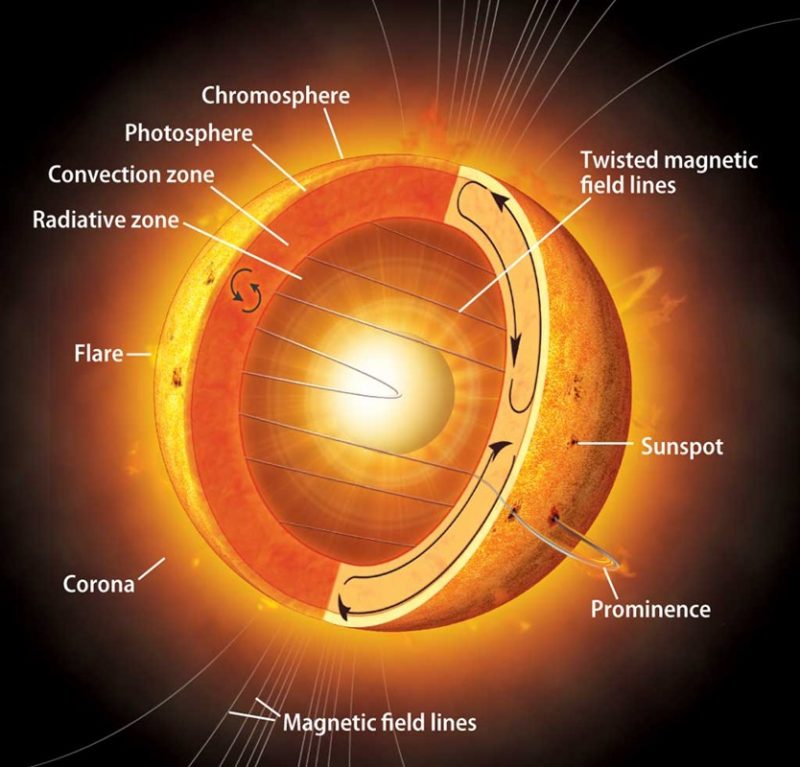 The many different parts of the sun, including the corona and prominences. Image via Astronomy/Roen Kelly.

In previous theories, it was thought that coronal rain only occurred in closed loops, where the plasma heats and cools, but can’t escape into space. Mason’s work suggests, however, that the rain begins in a closed loop, but then switches – through a process called magnetic reconnection – to an open one, like a train switching tracks. Some of the plasma will then escape, but some will fall back to the surface as rain. The plasma that does escape forms part of the slow solar wind.

Then there is the other, long-standing puzzle of why the sun’s outer atmosphere is 300 times hotter than its surface. On the face of it, that observed fact doesn’t seem to make logical sense. As Mason found, the rain in the loops can provide a cutoff point to determine just where the corona is getting heated:

If a loop has coronal rain on it, that means that the bottom 10 percent of it, or less, is where coronal heating is happening.

These scientists now hope that NASA’s Parker Solar Probe, which is making the closest passes of the sun ever – even flying right through the corona – will help to further confirm, or not, Mason’s findings.

Bottom line: Rain on the sun may sound nonsensical, but it is real – albeit in a form unlike anything on Earth – and may help to solve some long-lingering puzzles about how our sun works.