It’s an astrophysical whodunnit. Across the universe, galaxies are being killed. Scientists want to know, what’s killing them?

Ram Stripping of Galaxies from ICRAR on Vimeo.

New research published January 17, 2017 by a global team of researchers focused on 11,000 relatively nearby galaxies and asked why their gas — their lifeblood for the formation of new stars — is being violently stripped away on a widespread scale. The answer, according to these scientists, relates to the great halos of dark matter thought to surround galaxies and paints a picture of these galaxies falling through these larger halos, having their star-forming gas removed in a fast-acting process called ram-pressure stripping.

The study – published in the peer-reviewed journal Monthly Notices of the Royal Astronomical Society – was based at the International Centre for Radio Astronomy Research (ICRAR) in Australia. It shows that the phenomenon is more prevalent than previously thought and that it drives gas from galaxies, sending them to an early death by depriving them of the material to make new stars. Toby Brown, a PhD candidate at ICRAR and Swinburne University of Technology, led the study. He said:

During their lifetimes, galaxies can inhabit [dark matter] halos of different sizes, ranging from masses typical of our own Milky Way to halos thousands of times more massive.

As galaxies fall through these larger halos, the superheated intergalactic plasma between them removes their gas in a fast-acting process called ram-pressure stripping.

You can think of it like a giant cosmic broom that comes through and physically sweeps the gas from the galaxies.

It dictates the life of the galaxy because the existing stars will cool off and grow old. If you remove the fuel for star formation then you effectively kill the galaxy and turn it into a dead object.

Brown compared the fast-acting process of ram-pressure stripping to the other main process by which galaxies run out of gas and die. The slower process is known as strangulation. He said:

Strangulation occurs when the gas is consumed to make stars faster than it’s being replenished, so the galaxy starves to death. It’s a slow-acting process. On the contrary, what ram-pressure stripping does is bop the galaxy on the head and remove its gas very quickly — of the order of tens of millions of years — and astronomically speaking that’s very fast.

ICRAR researcher Barbara Catinella is co-author of the study. She said astronomers knew previously that ram-pressure stripping affected galaxies in great galaxy clusters, around which, astronomers believe, are the most massive dark matter halos in the universe. Brown explained:

This paper demonstrates that the same process is operating in much smaller groups of just a few galaxies together with much less dark matter. Most galaxies in the universe live in these groups of between two and a hundred galaxies.

We’ve found this removal of gas by stripping is potentially the dominant way galaxies are quenched by their surrounds, meaning their gas is removed and star formation shuts down.

To observe the 11,000 galaxies in this study, these astronomers used an innovative technique combining the largest optical galaxy survey yet completed — the Sloan Digital Sky Survey — with the largest set of radio observations for atomic gas in galaxies — the Arecibo Legacy Fast ALFA survey. 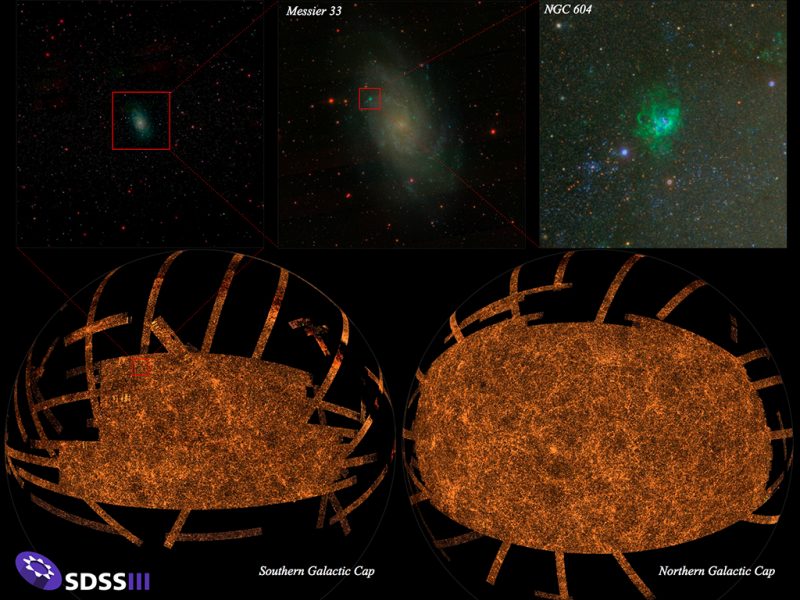 Here’s the Sloan Digital Sky Survey “Orange Spider.” It illustrates a wealth of information being obtained about galaxies via the most recent surveys. The picture in the top left shows the SDSS view of a small part of the sky, centered on the galaxy Messier 33 (M33). The middle and right top pictures are further zoom-ins on M33. The figure at the bottom is a map of the whole sky derived from the SDSS image. Visible in the map are the clusters and walls of galaxies that are the largest structures in the entire universe. Image via SDSS/ M. Blanton.