This article from NASA’s Center for Near-Earth Object Studies provides fresh details on the closest approach by a large asteroid since 2004 … and shows you how science works. 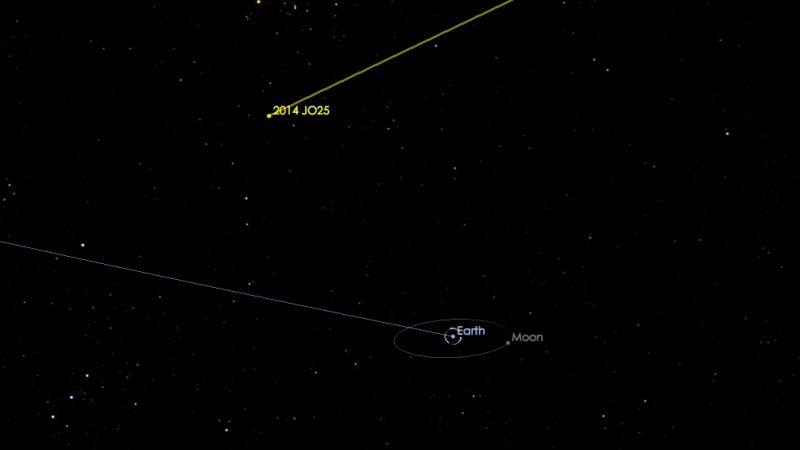 Originally published by the Center for NEO Studies on May 5, 2017

A relatively large asteroid called 2014 JO25 approached within 4.6 lunar distances (within 1.1 million miles or 1.8 million kilometers) of the Earth on April 19, 2017. This was the closest approach by an asteroid at least 2,000 feet (600 meters) in size since 4179 Toutatis, a 3-mile (5-km) sized asteroid, approached within 4.0 lunar distances in September 2004. The close approach provided an outstanding opportunity to study the physical properties of the asteroid, and the images obtained by ground-based radars are comparable in resolution to those that could be obtained by a spacecraft flyby. 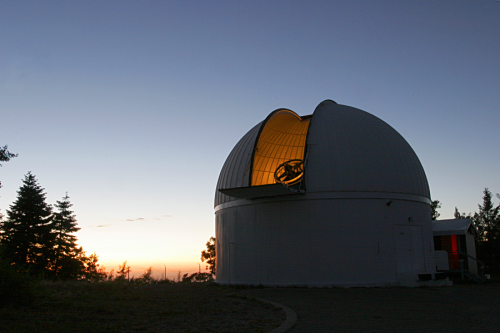 Part of the Catalina Sky Survey, this 1.52-meter Cassegrain telescope was used to discover 2014 JO25 in May 2014. The observatory is located just north of Tucson, Arizona in the Santa Catalina Mountains. Image via NASA JPL.

Shortly after its discovery Jet Propulsion Laboratory (JPL) astronomer Joe Masiero, a member of the NEOWISE science team, used observations made by the NEOWISE spacecraft in 2014 to estimate 2014 JO25’s size as roughly 2,100 feet (650 meters), and its optical albedo as 0.25. Albedo is the proportion of incident sunlight that a body reflects back into space. For comparison, the moon has an albedo of 0.12, meaning that it reflects only 12% of the sunlight that reaches it. Based on initial estimates 2014 JO25’s surface would be twice as reflective as the moon’s, fairly bright for an asteroid.

Until the recent close pass, the asteroid’s spectral class, rotation period, and pole direction were unknown. This close approach provided an opportunity for very detailed radar and optical observations, which allowed astronomers to better determine the characteristics of this unique object. But precision astrometry – measurements of the asteroid’s position in space relative to stars in the background sky – was needed first to determine a more precise orbit, crucial for the radar observations.

So, in September 2016, Joe Masiero made a special effort to obtain more astrometric observations of 2014 JO25, which was distant at the time and therefore very faint. He had to use the very large Gemini South 8.2-meter telescope on Cerro Pachón, Chile to make these measurements. These observations significantly reduced the orbital uncertainties for the asteroid. Using the more accurate orbit, Peter Veres of the Center for NEO Studies (CNEOS) at JPL looked through archival Pan-STARRS images taken in 2011, before the object was known to exist. These astrometric measurements were crucial for reducing the pointing uncertainties for this close pass in April 2017 and enabled the successful radar observations.

Radar observations were performed at the National Science Foundation’s Arecibo Observatory equipped with the NASA planetary radar system by a team led by Patrick Taylor of Arecibo Observatory between April 15-21, and at NASA’s Goldstone Solar System Radar by a team led by Lance Benner of JPL from April 16-21. These dates cover the actual closest approach time at 08:24 EDT on April 19, and due to the proximity of the asteroid, the observations produced hundreds of radar images with resolutions of 7.5 meters/pixel from both observatories and a smaller number of images at 3.75 meter/pixel resolution at Goldstone. 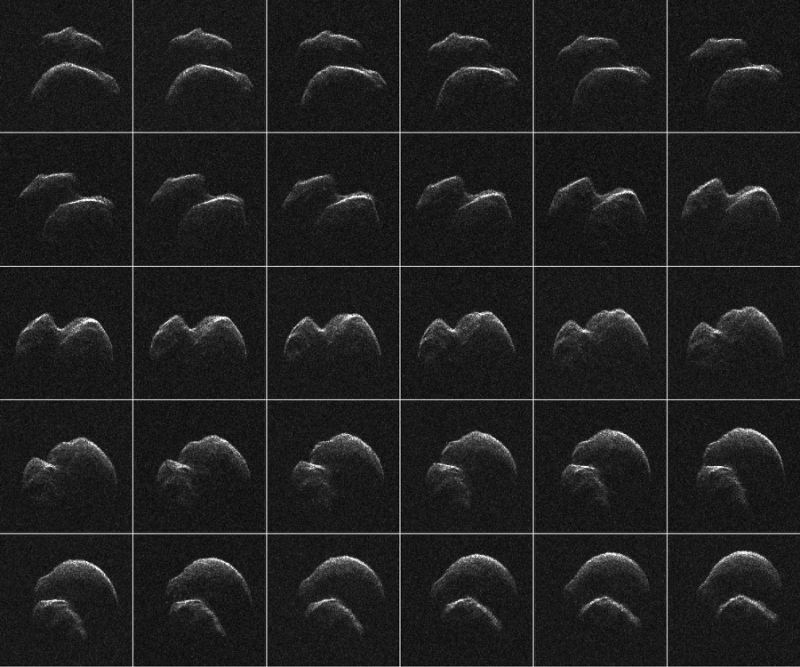 This sequence of images was obtained by NASA’s 70-meter antenna at Goldstone near Barstow, California, on April 18, 2017 – the day before 2014 JO25’s closest approach. The double-lobed asteroid safely passed by the Earth at a distance of 1.1 million miles (1.8 million km or ~4.6 times the average distance from Earth to the moon). Image via NASA JPL.

The radar images reveal that 2014 JO25 has an irregular and deeply bifurcated shape with two major components that are connected by a relatively narrow neck. The longest axis of the asteroid is about 0.6 miles (1 km) in extent and the short axis is roughly 2,000 feet (600 meters). The two components (or lobes) are each several hundred meters across, but one is roughly 60% larger than the other and the smaller lobe appears more oblong and less rounded. The two lobes are in contact with their short axes pointed approximately toward each other. Significant portions of each lobe appear rounded but there are also small areas where the surfaces appear angular.

The neck between the lobes is more than 600 feet (200 meters) deep in some places and its depth varies with location.

The general appearance of the asteroid, depending on viewing angle, is vaguely reminiscent of a lopsided peanut, or a rubber ducky. Understanding the true detail of the three-dimensional shape will require extensive reconstruction after the radar data have been fully processed.

This animation of 2014 JO25 was compiled from the observations made by the 300-meter Arecibo Observatory near closest approach on 19 April 2017. The resolution is 7.5 meters /pixel. There are small bright features that may be boulders on the surface as well as raised topography that is casting shadows. Image via Arecibo Observatory/ NASA/ NSF.

The overall shape of the asteroid also resembles the now famous rubber-ducky-shaped nucleus of Comet 67P/Churyumov-Gerasimenko that was recently explored by the European Space Agency’s Rosetta spacecraft, but the comet’s nucleus is more than four times larger than this asteroid.

Prior to the close approach, all that was known about the physical properties of 2014 JO25 were an estimate of the size, ~650 meters, and its reflectivity, ~25%, based on “effective diameter” infrared measurements from NASA’s NEOWISE spacecraft, i.e. what the size would be if the object were roughly spherical. The results from the radar images are consistent with the size and reflectivity estimates from the NEOWISE data given the irregular shape of the asteroid.

The most detailed radar images of 2014 JO25 reveal evidence for smaller scale features such as flat regions up to 600 feet (~200 meters) long, ridges, concavities, possible impact craters several tens of meters in diameter, hills, and collections of bright spots that may indicate large boulders.

Based on changes in the appearance of the asteroid from the beginning to the end of the radar observing campaign, the line of sight to the asteroid was relatively close to its equator from April 15-17, at least several tens of degrees away from the equator on April 18, and then again near its equator again on April 20 and 21. The asteroid moved about 150 degrees across the sky during the observations, so substantial excursions in the latitude visible each day could be expected. The smaller lobe nearly disappeared during a narrow interval on April 20, indicating that the larger lobe was eclipsing the smaller lobe and that the radar line-of-sight was looking down the long axis that joins the two lobes.

The radar teams used sequences of images from Arecibo and Goldstone to estimate the asteroid’s rotation period by tracking specific individual features visible during each observing session across observations obtained on multiple days. This yielded a rotation period of about 4.5 hours. 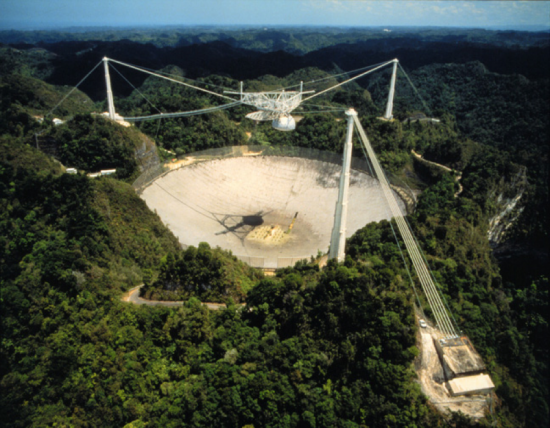 The Arecibo radio telescope – used to make radar observations of asteroid 2014 JO25 – spans about 1,000 feet (just over 300 meters) across. Image via NASA JPL.

The radar observations were also used to measure the asteroid’s distance and line-of-sight velocity on several occasions, information that has been used to improve calculation of the asteroid’s past and future motion around the sun. Although it was already known that the 2017 pass would be the closest by the asteroid for more than 400 years, the detailed radar measurements now obtained will allow the motion to be computed reliably for thousands of years, an unusually long interval compared to the predictions for the more than 16,000 near-Earth asteroids discovered to date.

The radar measurements can also be used to gauge the roughness of the asteroid’s surface on size scales of tens of centimeters. Measurements from Arecibo and Goldstone both show that the surface roughness of 2014 JO25 is similar to those estimated by radar for asteroids 433 Eros, 25143 Itokawa, and 4179 Toutatis, all of which have now been visited by spacecraft so that there are ground-truth images for comparison. The surface roughness is also comparable to the average seen for more than 200 other near-Earth asteroids previously studied with radar that have not been explored by spacecraft.

In principle, the radar reflectivity can be used to constrain the composition of the asteroid. This requires a detailed 3D shape model that is not yet available, but using estimates of the dimensions visible in the images, the radar albedo is about 0.2, which is consistent with a rocky composition but not similar to a metallic composition.

The NASA Infrared Telescope Facility (IRTF) was also used … to observe 2014 JO25. The 3-meter telescope is located atop Mauna Kea, Hawaii and can take spectra of celestial bodies to better determine their bulk composition. 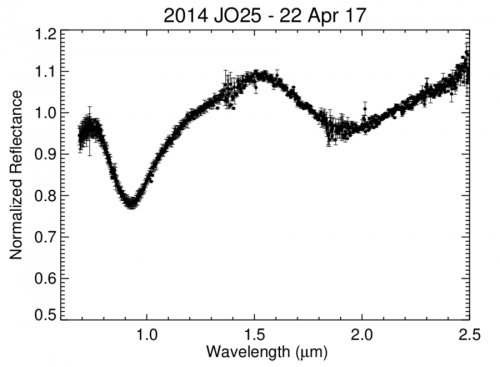 The SpeX instrument (a spectrograph) on the IRTF observed 2014 JO25 on 21 April 2017. This dataset shows the spectrum of the asteroid from 0.7 to 2.5 microns. This spectrum contains two large diagnostic absorption features at 1 and 2 microns and is consistent with a spectral classification of S-type asteroids. Image via J. Emery/UT-Knoxville et al.

SpeX is a medium-resolution spectrograph built at the Institute for Astronomy (IfA) for the IRTF. On the evening of April 21, 2017, the SpeX instrument was used to distinguish the asteroid’s spectral class. Based on the absorption features at 1 and 2 microns, it is consistent with an S-type asteroid. S-type asteroids are more of a stony composition and moderately bright. This is the same spectral class as Toutatis, and Itokawa, the asteroid visited by the Japanese Hayabusa 1 mission.

The 4.5-hour rotation period is quite rapid for a contact binary shape, and given the dimensions of the asteroid, 2014 JO25 is rotating almost fast enough to cause separation into two objects.

So how did 2014 JO25 acquire this shape? Scientists don’t know for sure, but there are a number of plausible scenarios.

One mechanism is that the asteroid formed during a slow collision between two separate objects. Or, the asteroid could have formed by slowly spinning up and now starting to come apart. For example, there is strong evidence that many near-Earth asteroids are weakly bound collections of rocks and dust that are held together primarily by their very feeble gravity. If so, then the asteroid’s shape could distort if its rotation accelerates, which can happen due to a subtle effect related to how irregularly-shaped asteroids absorb visible sunlight and then re-radiate it as infrared light. The difference in the direction of the emitted infrared relative to the absorbed sunlight produces a gentle torque that can gradually change the spin. This acceleration has actually been observed for several asteroids, and is called the Yarkovsky–O’Keefe–Radzievskii–Paddack, or YORP effect, after four scientists who researched the dynamical components of this concept. If the rotation spins up enough for a loosely bound object, then the shape can change and double-lobed objects may form.

Another possibility is that the asteroid could have more closely approached one of the planets – Mercury or Earth (its orbit can take it close to either of these) – and that planetary tides could have started to pull it apart. However, the existence of dozens of contact binaries suggests that the mechanism responsible for their formation acts across a wide swath of the inner solar system, so that argues against the theory it is caused by very close planetary passes, which are relatively rare.

Yet another possibility is that a pre-existing, larger asteroid was shattered by a collision with another object, and some of the remaining debris re-accumulated by its weak mutual gravitational attraction into a few individual rubble-piles which settled onto each other.

Whatever its origin, 2015 JO25’s shape is another clue to the fascinating histories of the small bodies of our Solar System.

Bottom line: This article from NASA’s Center for Near-Earth Object Studies provides fresh details on the closest approach by a large asteroid since 2004 … and shows you how science works.