What makes some galaxies green?

State-of-the-art computer simulations let scientists figure out why some galaxies are green. They said a green color for a galaxy might reveal a troubled past. 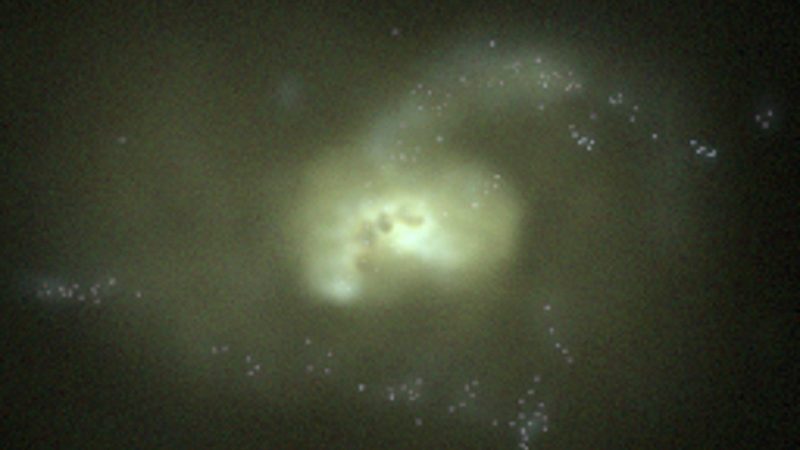 Red and blue galaxies are common in our universe. In blue galaxies, many new stars and planets are being born. In red galaxies, many old stars are burning themselves out. But green galaxies are rare, and scientists have wondered what causes them. A new state-of-the-art computer simulation from an international team led at Durham University’s Institute for Computational Cosmology shows that green galaxies are likely to be at a critical stage in their evolution, when they are rapidly turning from blue to red. These scientists presented their research this week (June 30, 2016) at the National Astronomy Meeting in Nottingham, England. They said the green color of a galaxy:

… could reveal a troubled past.

The scientists called their project EAGLE (Evolution and Assembly of GaLaxies and their Environments). They uses simulations to model how both the ages of stars in galaxies – and what those stars are made from – translate into the color of light that they produce. Lead researcher James Trafford said in a statement:

Galaxies emit a healthy blue glow while new stars and planets are being born. However, if the formation of stars is halted galaxies turn red as stars begin to age and die.

We followed simulated galaxies as they changed color, and investigated what processes caused them to change.

Stars are born from clouds of dense gas in a galaxy. These scientists concluded that a powerful process is needed to destroy their gas supply, cut off star formation and cause a shift in color from blue to red. Trafford said:

We typically find that smaller green galaxies are being violently tossed around by the gravitational pull of a massive neighbor, causing their gas supply to be stripped away.

Meanwhile, bigger green galaxies may self-destruct as immense explosions triggered by supermassive black holes at their centers blow the dense gas away.

In other words, it’s not easy being green.

The research also showed that “a lucky few galaxies” might absorb a fresh supply of gas from their surroundings. This can revive the formation of stars and planets, and restore galaxies to a healthy blue state.

Bottom line: Using the state-of-the-art computer simulations, scientists may have answered the question of why green galaxies are rare.