What is the asteroid belt?

The asteroid belt is a region of our solar system – between the orbits of Mars and Jupiter – in which many small bodies orbit our sun. Here’s a good basic introduction. 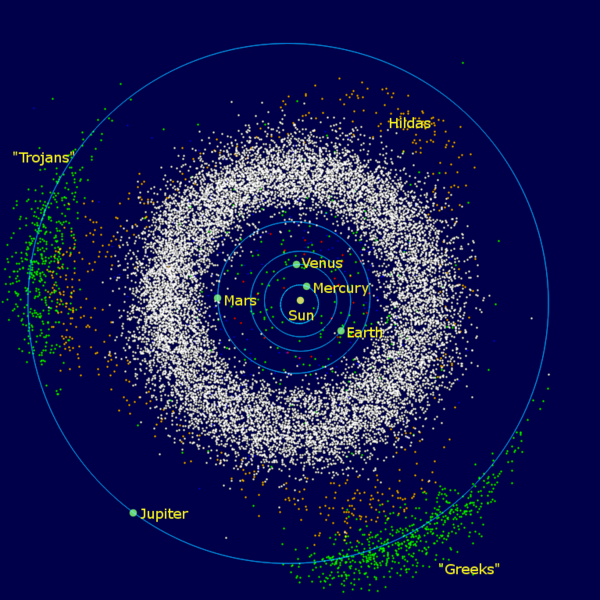 Meet the asteroid belt, a place in our solar system where small bodies – mostly rocky and some metallic – orbit the sun. These little worlds are also sometimes called minor planets. They move mostly between the orbits of the fourth planet Mars and fifth planet Jupiter. Astronomers once thought they were all that was left of a rocky planet, long ago torn apart by Jupiter’s gravity. Now, most astronomers now think the asteroid belt is just rubble that Jupiter’s gravity prevented from ever coalescing into a planet. Thus the asterids are likely simply leftovers from the ordinary processes that created our solar system, 4.6 billion years ago.

Their name, asteroid, means starlike. They got this name because – in the early 1800s, when the first asteroids were discovered – astronomers thought they looked like stars. And yet their movement in front of the star background, caused by their nearness to us, showed them to be something other than stars.

Measurements of the amount of material in the asteroid belt suggest it contains about enough material – combined together – to form a body smaller than Earth’s moon.

Comprising an estimated one to two million asteroids more than half a mile (about a km) across, plus untold millions of smaller ones, the asteroid belt contains objects which vary wildly in size. The smallest are probably no bigger than pebbles. The biggest object in the asteroid belt was also the first one to be discovered, in the year 1801. It is 1 Ceres, which measures some 587 miles (945 km). Ceres is now classified as a dwarf planet, by the way, by the International Astronomical Union. 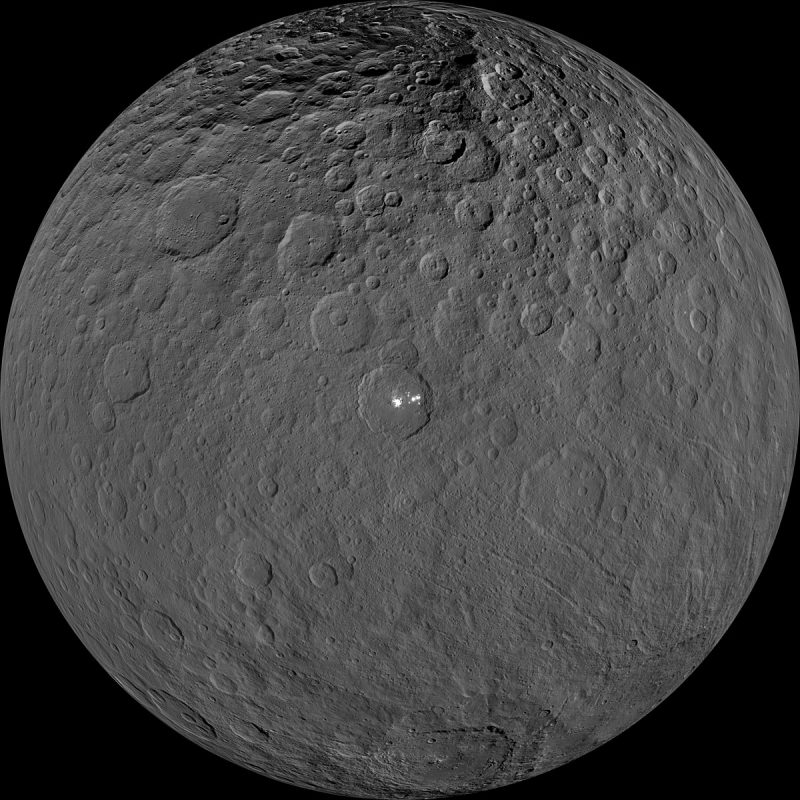 This orthographic projection shows the largest body in the asteroid belt – 1 Ceres, discovered in 1801 – now categorized as a dwarf planet by the International Astronomical Union. Ceres is one of several main-belt objects visited by spacecraft. This composite image is from the Dawn spacecraft, still the only earthly spacecraft to have orbited first one body in our solar system (Vesta, 2011 to 2012), then gone on to orbit a second (Ceres, arrived 2015). See the 2 bright spots in Occator Crater? They spawned speculation about alien life on Ceres, but turned out to be salt deposits. This image is made from views Dawn took during its low-altitude mapping orbit, at about 240 miles (385 km) above the surface. Image via NASA.

Outer space is vast. And thus, despite there being many millions (possibly billions) of objects in the asteroid belt, the average distance between them is 600,000 miles (about a million km). This means that spacecraft can fly through the asteroid belt without colliding with any asteroids, although, obviously, a chance collision can never be ruled out completely. The asteroid belt is certainly nothing like the densely-packed asteroid fields depicted in fantasies like “Star Wars” and its ilk.

Standing on any asteroid in the belt, you would likely be unable to see any other asteroids, because of their distance.

The asteroid belt lies between 2.2 and 3.2 astronomical units (AU) from our sun. One AU is the distance between the Earth and sun. So the width of the asteroid belt is roughly 1 AU, or 92 million miles (150 million km).

Its thickness is similarly about 1 AU thick. 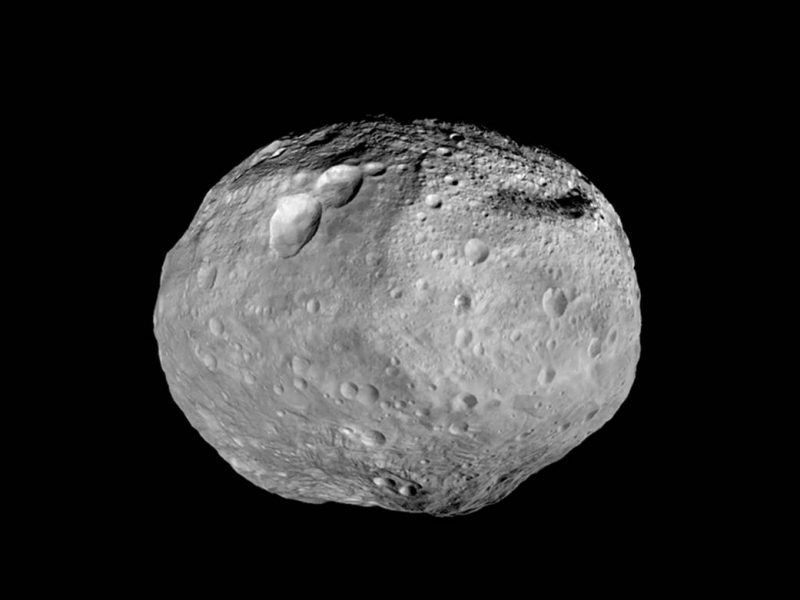 Here’s asteroid 4 Vesta – discovered in 1807 – the 2nd-biggest asteroid after Ceres. The Dawn spacecraft orbited Vesta from July 2011 to September 2012. A towering mountain at this asteroid’s south pole – more than twice the height of Mount Everest – is visible at the bottom of the image. The set of three craters known as the “snowman” can be seen at the top left. Image via NASA.

The asteroid belt is often referred to as the “main” belt to distinguish it from other, smaller groups of asteroids in the solar system such as the Lagrangians (for example, Trojan asteroids orbiting in Jupiter’s orbit around the sun) and Centaurs in the outer solar system.

What was thought to be a homogeneous belt is now known to be slightly more complicated. There are different and distinct zones within the main belt asteroids, especially at its peripheries, where astronomers now recognize the Hungaria group at the inner edge and the Cybele asteroids at the outer. Toward the middle of the belt there is the highly-inclined Phocaea family.

In addition, astronomers have established that the age of asteroids in the main belt also varies. They’ve now classified several asteroid groupings by their age including the Karin family, a group of about 90 main-belt asteroids that share an orbit and are thought to have come from a single object an estimated 5.7 million years ago. And there is the Veritas family, from an estimated 8.3 million years ago. A very recent group is the Datura family, dating from just 530,000 years ago from a collision.

Read on Wikipedia about asteroid families.

Read on Wikipedia about asteroids that have been visited by spacecraft 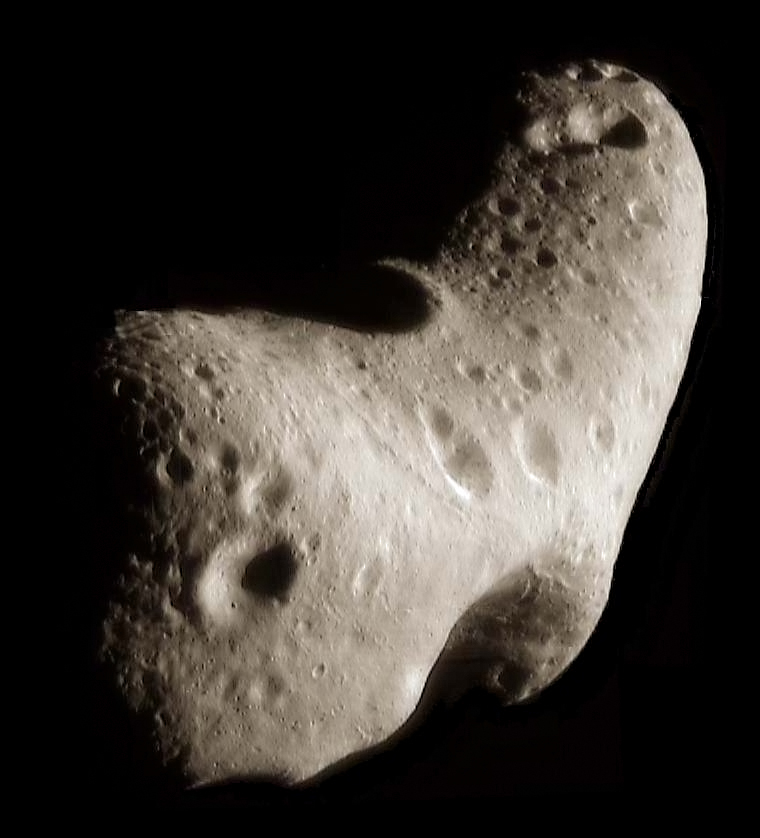 In order to be round, a body in space has to have enough internal mass to have strong-enough gravity to have pulled itself into the shape of a ball. Most asteroids don’t accomplish this, and thus they come in all sorts of shapes. Here is asteroid 433 Eros – discovered in 1898 – now famous as the 1st asteroid ever to be orbited by a spacecraft, NEAR Shoemaker, in 1998. This object is considered a main-belt asteroid: although its orbit crosses that of Mars, it doesn’t quite reach that of Earth. Yet it’s also considered a near-Earth asteroid … a subject for another day! Image via NASA.

Bottom line: The asteroid belt is a region of our solar system – between the orbits of Mars and Jupiter – in which many small bodies orbit our sun.