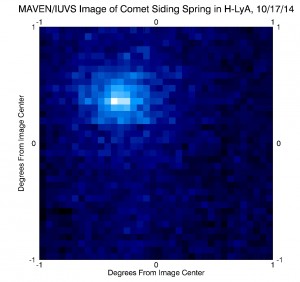 This image of comet C/2013 A1 Siding Spring taken by NASA’s Mars Atmosphere and Volatile EvolutioN / MAVEN spacecraft, from a distance of 8.5 million KM / 5.3 million miles, two days before the comet’s close flyby of Mars and the spacecraft. Comet Siding Spring is on its first trip this close to the sun from the Oort Cloud at the outer fringe of the solar system.

This is an ultraviolet hydrogen image showing the hydrogen distribution within the coma.

Thank you! Your submission has been received!
Oops! Something went wrong while submitting the form.
END_OF_DOCUMENT_TOKEN_TO_BE_REPLACED