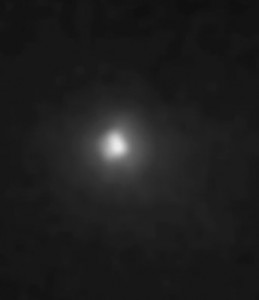 Screen dump I got from the video of the NASA broadcast the other evening about the very close passage by Mars of the comet C/2013 A1 Siding Spring. Could not see it live as was not here.

Comet Siding Spring nucleus rotation brightness curves have revealed the rotational period. The comet rotates about once every eight hours, the first ever determined rotation period of an Oort Cloud comet.
The nucleus is barely 450 metres wide.

I have cropped the image but kept the full resolution of the original. The crescent appears to be facing right as expected against the coma. In fact the night side of the comet on the left can be made out against the brighter coma.

Image via NASA/JPL/University of Arizona.

Thank you! Your submission has been received!
Oops! Something went wrong while submitting the form.
END_OF_DOCUMENT_TOKEN_TO_BE_REPLACED