What happened when the comet swept past Mars

The story you’ve been waiting for. The spacecraft images are fascinating, and the details of Comet Siding Spring’s exceedingly close pass of Mars might surprise you.

Animated GIF showing the comet belting past Mars on October 19, one frame every 17 seconds, from the High Resolution Stereo Camera (HRSC) on ESA’s Mars Express. Resolution is 17 km / 11 miles. Bright star at top might be the dying orange giant star Arcturus. From Mars, the comet appeared to pass close to this star. Image via ESA Mars Express/HRSC/DLR/FU Berlin.

On October 19, 2014, Comet C/2013A1 Siding Spring passed only 140,000 kilometers / 87,000 miles of Mars, closer than any known comet in recorded history. It was moving at a speed of 203,000 kilometers / 126,000 miles per hour. At closest approach, the comet swept over the predawn side of Mars after passing over the day side. The comet is orbiting the sun in the opposite direction to the planets in our solar system. It’s making its first foray into the inner solar system after a seven-million-year journey from the postulated Oort Cloud, some one-light year from the sun. There were observations from the surface of Mars, and from orbit. There is a potential twist to this story, with this comet potentially even more remarkable than first suspected. Plus there was a meteor shower as seen from Mars’ surface. All of this is described below.

The several spacecraft now orbiting Mars were not designed to study passing comets. Yet they all observed the comet around closest approach, with the orbiters all ‘taking cover’ over the opposite side of Mars when the coma and the tail of the comet swiped Mars.

These two infrared images were taken of Comet Siding Spring by the Compact Reconnaissance Imaging Spectrometer for Mars (CRISM) camera on NASA’s Mars Reconnaissance Orbiter. CRISM used all 107 infrared channels to image the comet; in these images three color channels were used. The images yielded information about the comet’s inner and outer coma. Image via NASA/JPL-Caltech/JHUAPL/CRISM. 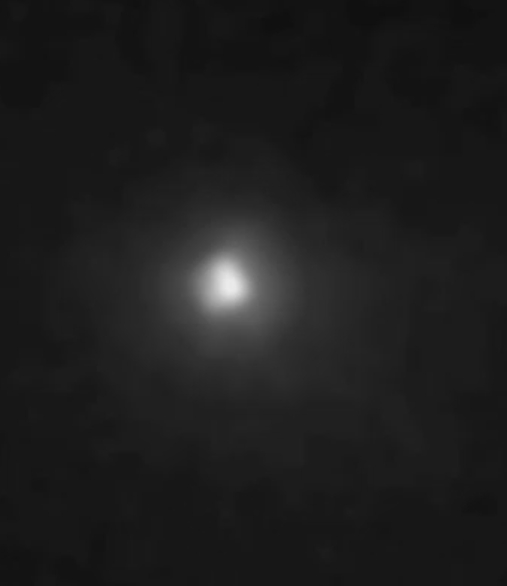 A fully resolved image of Comet Siding Spring nucleus in crescent phase as seen by MRO HiRISE. This image is a screen dump from a video of a NASA broadcast. Image via NASA/JPL/University of Arizona. 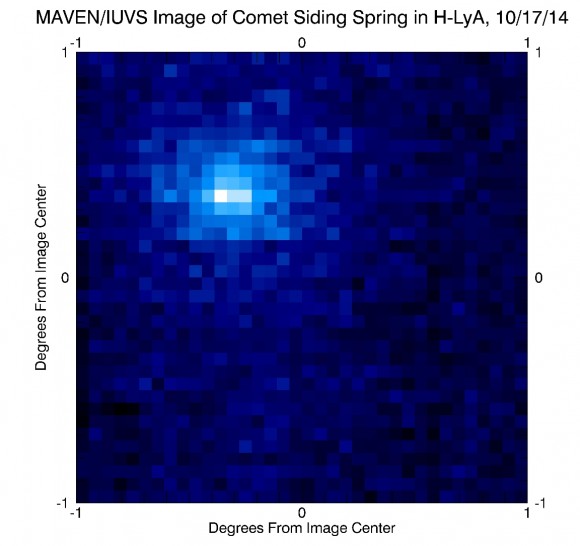 This image of comet C/2013 A1 Siding Spring was taken by NASA’s Mars Atmosphere and Volatile EvolutioN / MAVEN spacecraft, from a distance of 8.5 million kilometers / 5.3 million miles, two days before the comet’s close flyby of Mars and the spacecraft. This is an ultraviolet hydrogen image showing the hydrogen distribution within the coma. Image via NASA / UoC / LASP. Mars Atmosphere and Volatile EvolutioN / MAVEN spacecraft

Potential twist to the story of the nature of the comet. Comet C/2013A1 Siding Spring approached the solar system from the direction in our sky of constellation Lepus the Hare, near the border with the constellation Columba the Dove.

As our solar system orbits the center of the Milky Way once every 250 million years at a speed of approximately 829,000 kph / 515,000 mph (230 kps / 143 mps), we are traveling towards a point in the constellation Hercules, near the constellation Lyra the Lyre. That point is called the Solar Apex by astronomers.

The opposite point in Columba the Dove is called the Solar Antapex.

Comet C/2013A1 Siding Spring approached the solar system from a point very close to the north of the Antapex, and at a speed and direction which meant the comet overtook the solar system.

Those facts raise questions. Is indeed Comet C/2013A1 Siding Spring from the Oort Cloud? Or might it be an interstellar object ejected from another solar system entirely? The official line is that this is still an Oort Cloud comet, but the trajectory and speed of the comet remain too interesting to ignore.

Meteor shower as seen from Mars’ surface. As mentioned earlier, Mars was completely enveloped in the coma of Comet Siding Spring for a short period. The NASA Mars Reconnaissance Orbiter and MAVEN spacecraft along with the ESA Mars Express all observed a huge rise in the mineral content of the upper atmosphere on Mars as Mars experienced the mother of all meteor showers.

Levels over a 24-hour period dropped back to normal as the heavy particles settled out. These observations represent the first every direct chemical measurements of an Oort Cloud comet by spacecraft. 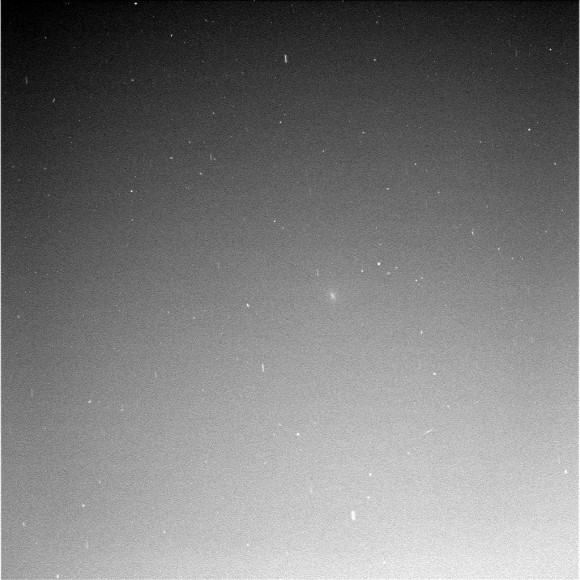 Comet Siding Spring seen by Mars MER B Opportunity at the Meridiani Planum on Mars. Image via NASA. 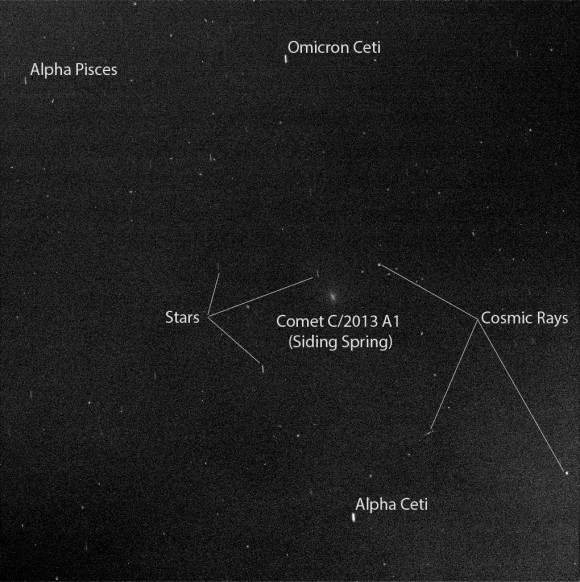 Comet Siding Spring, under a dark sky at around the beginning of Martian morning twilight. At this time, the comet appeared among the stars of the constellation of Cetus the Sea Monster. Image via NASA’s Opportunity rover on Mars. 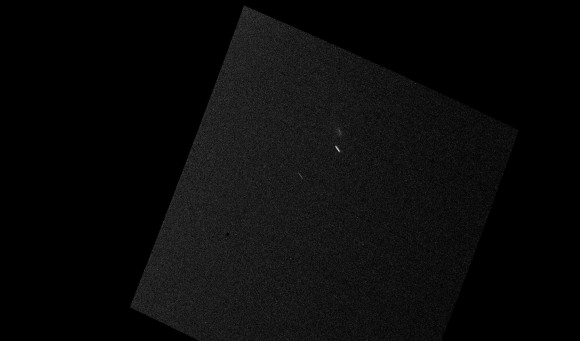 Comet Siding Spring is a fuzzy streak to the upper right of the bright streak, as captured by the MastCam on the Mars Science Laboratory Curiosity, at the Gale Crater on Mars. Image via NASA.

On the surface of Mars … two Mars rover – the veteran Mars Exploration Rover Opportunity and the Mars Science Laboratory Curiosity – both observed Comet C/2013A1 Siding Spring. These rovers are located at the Meridiani Planum and Gale Crater, respectively.

Opportunity had the best views as was able to observe the comet under a very dark sky at around the beginning of martian morning twilight with the comet among the stars of the constellation of Cetus the Sea Monster. See images above.

Curiosity has a vastly more difficult job as from Gale Crater. The speed of the comet meant that the comet was visible only under a much brighter sky. But MSL Curiosity was still successful in observations. See image above. 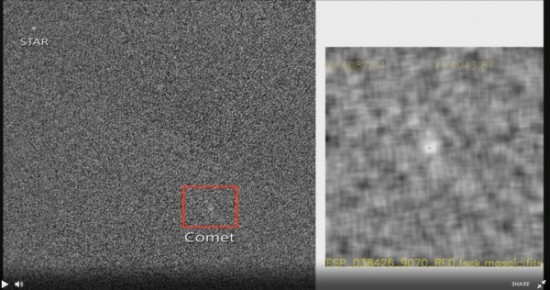 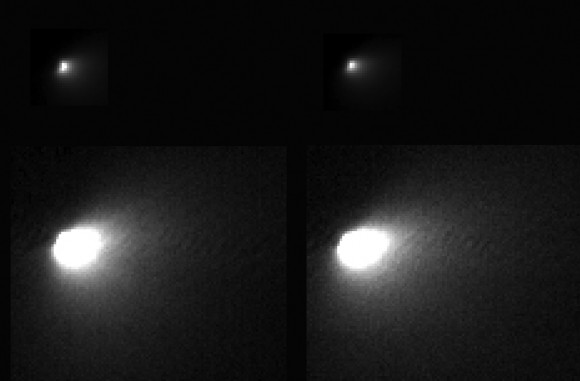 The High Resolution Imaging Science Experiment (HiRISE) camera on NASA’s Mars Reconnaissance Orbiter captured views of comet C/2013 A1 Siding Spring while that visitor sped past Mars. The images are the highest-resolution views ever acquired of a comet coming from the Oort Cloud at the fringes of the solar system (or possible interstellar comet). The comet’s nucleus turned out to be tiny, barely 400 meters wide. The two sets of images were taken nine minutes apart. Top set the actual nucleus, bottom set including the inner coma. Image via NASA/JPL-Caltech/University of Arizona. HiRISE. 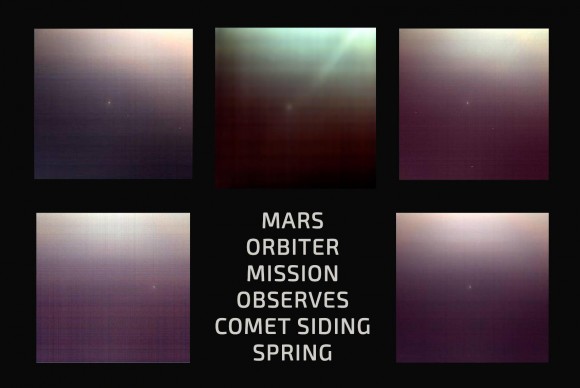 Back in Mars orbit … the Mars orbiter Mars Reconnaissance Orbiter using the hugely powerful HiRISE (High Resolution Imaging Science Experiment) observed the comet prior to the spacecraft’s duck behind Mars. In this way, it actually imaged the nucleus of the comet, the very first time that a nucleus of an Oort Cloud comet has been seen.

The observations using the HiRISE camera had been going on for several days leading up to closest approach and not only was the nucleus seen, but also the comet’s rotational period on its axis was detected to be nearly eight hours.

The shape of the nucleus using light curves as well as the images was determined to be roughly spherical.

Unlike other Kuiper Belt comets in short period orbits seen up close and even recently landed on which are dark as the carbon rich surface ices have become mostly dust, this comet was very bright, reflecting over 80% of the light that hits it. The CRISM (Compact Reconnaissance Imaging Spectrometer for Mars) also onboard the Mars Reconnaissance Orbiter imaged the comet in all 107 infrared channels and these confirm the elements that led to the temporary enrichment of the Martian atmosphere by detecting the same elements in the comet’s inner coma. CRISM could not image the nucleus as the field of view is wider.

The Indian Space Research Organisation Mangalyaan spacecraft also got some nice observations with the Mars Colour Camera monitoring the activity levels in the inner coma, before joining the NASA and ESA orbiters to duck behind Mars.