Astronomers meeting this week in Nashville hear a new theory about the longest gamma rays bursts.

Astronomers are meeting in Nashville, Tennessee this week (April 14-18, 2013) to discuss the cosmic explosions known as gamma-ray bursts (GRBs). Gamma ray bursts are the most luminous explosions in the universe. Thought to be the birth signatures of black holes, it’s possible they arise from the collapse of massive stars and/or the merger of compact objects in a binary star system. One of the most mysterious GRBs – considered an ultra-long GRB – is known as the 2010 Christmas Burst. First detected by NASA’s Swift observatory on Christmas Day 2010, GRB 101225A lasted at least 28 minutes, which is unusually long for a gamma-ray burst. Follow-up observations of the burst’s afterglow by the Hubble Space Telescope and ground-based observatories were not able to determine the object’s distance using spectroscopic methods. And therein lies much of the source of the mystery. With its distance unknown, the burst’s source has had at least two equally plausible explanations. Now new data has led to a third explanation, being discussed this week at the meeting in Nashville, which, by the way, is known as the Huntsville Gamma Ray Burst Symposium.

Gamma-ray bursts are brief and intense flashes of gamma rays. While they last, they are the brightest objects in the known universe. They can occur randomly from any direction of the sky and are so powerful that they can be detected across billions of light-years. Most gamma-ray bursts are thought to be the result of huge stellar explosions – supernovae – in distant galaxies. They typically flash into being, shine for milliseconds or last several minutes, and then leave behind what astronomers refer to as an afterglow. According to the new theory presented at this week’s symposium, the 2010 Christmas Burst might also result from a supernova explosion.

There are two other examples of GRBs like the 2010 Christmas Burst now. They are all peculiar. GRBs typically last no longer than a few minutes, but the Christmas Burst lasted closer to half an hour, and astronomers believe this new type of burst can last up to several hours. 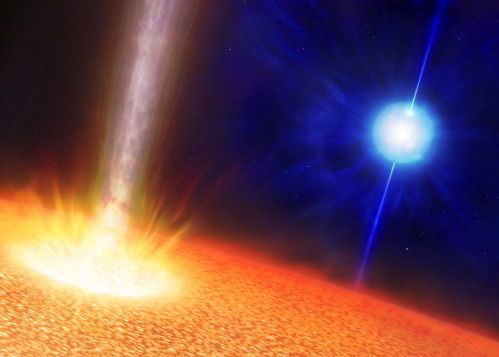 An artist’s impression of the stars creating gamma-ray bursts. The foreground star is the suggested progenitor of an ultra-long gamma-ray burst (GRB). It has a mass of perhaps 20 times the sun but is up to a thousand times larger. In both cases the GRB is produced by a jet punching through the star, but in the case of the ultra-long GRBs the much larger size of the star creates a much longer lived jet.Image copyright Mark A. Garlick, used with permission by the University of Warwick 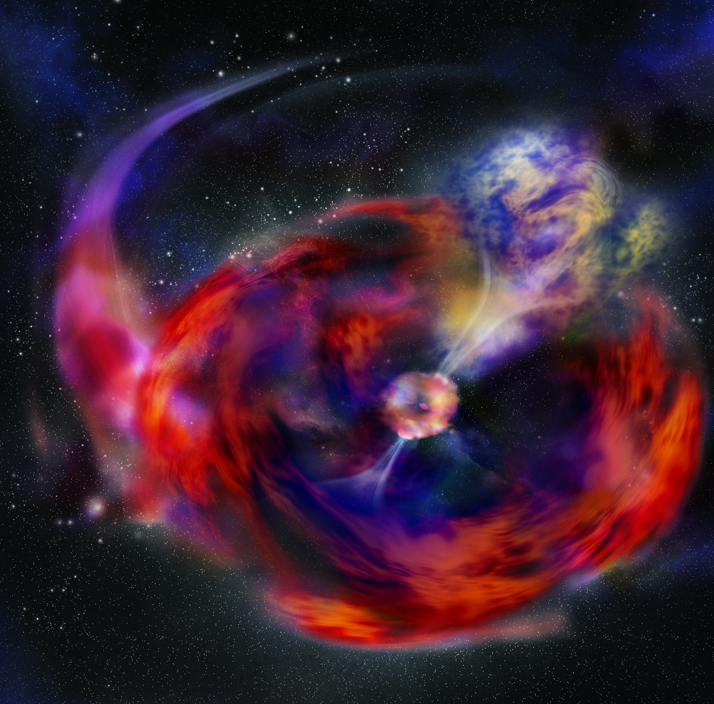 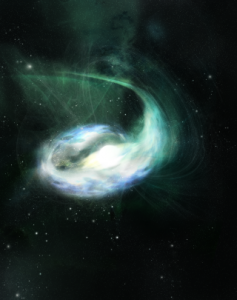 Artist’s impression of scenario in which a small object like a comet falls onto a neutron star and triggers the Christmas Burst. Credit: NASA/Swift/Aurore Simonnet, Sonoma State Univ.

The first two alternate explanations of the Christmas burst – aka GRB 101225A – appeared in the December 1, 2011 issue of the journal Nature.

The nearby small body theory – by Sergio Campana’s team at the Istituto Nazionale di Astrofisica in Italy – suggests that a small ordinary body such as a comet or asteroid might have flown too close to an exotic, densely packed neutron star relatively near us in space. In this version of events, the 2010 Christmas Burst originated in our own Milky Way galaxy, at a distance of no more than 10,000 light years, in direction of our galaxy’s Perseus spiral arm. The dense neutron star would have pulled the small comet or asteroid apart in with its powerful gravity, shattering it into fragments and forming a disk of debris around the neutron star. Eventually, the debris falls on to the star itself and explodes, releasing vast amounts of energy.

The more distant “helium star” theory – from Christina Thöne’s group from the Instituto de Astrofísica de Andalucía in Spain – also involves a neutron star, but this group assumed the object originated much farther away in space, some 5.5 billion light-years away. In this scenario, this distant neutron star was part of an exotic binary system, where the other star was an evolved supergiant “helium star.” At some point, the neutron star entered the atmosphere of the giant star, during which the giant star expelled most of its surrounding envelope of hydrogen. The two stars merge into a black hole or magnetar, which is a dense star with a powerful magnetic field. In either case, a jet of intense energy would have been created that burst through the gas envelope, creating what we saw as GRB 101225A: the Christmas Burst, according to these astronomers.

The new theory about these long-lived GRGs is being presented this week at the Huntsville Gamma Ray Burst Symposium, by a team led by Dr. Andrew Levan at the University of Warwick. Using data from the Gemini Telescope in Hawaii, these scientists calculated that the source of the burst is not in our own galaxy, and not 5.5 billion light-years away, but fully 7 billion light-years away. Armed with this new idea about its location, Dr. Levan’s team is suggesting at the symposium this week that the burst originated in a supergiant star, 20 times more massive than our sun, which at one time evolved to become among the biggest and brightest stars in the universe with a radius of up to 1 billion miles – up to 1,000 times that of the sun. This team believes the ultralong durations of the 2010 Christmas Burst and two other similar bursts since then are simply due to the sheer size of the supergiants exploding in a supernova.

Dr. Levan commented in a press release on April 16:

These events are amongst the biggest explosions in nature, yet we’re only just beginning to find them.

It really shows us that the universe is a much more violent and varied place than we’d imagined.

Previously we’ve found lots of gamma-ray events with short durations, but in the past couple of years we’ve started to see the full picture.

Is Levan’s team correct? Do the ultra-long GRBs originate in supernova explosions from supergiant stars? Unless astronomers can agree on the distance to this object, it will be impossible to say, and the Christmas Burst must remain mysterious. It will be interesting to see, in the weeks and months ahead, how other astronomers react to the ideas of Levan’s team.

Bottom line: The mysterious Christmas Burst – GRB 101225A, which erupted on Christmas Day 2010 and shone powerfully and briefly for 28 minutes – now has three explanations. One theory to explain it, led by Sergio Campan at the Istituto Nazionale di Astrofisica in Italy, involves a minor body or comet falling onto a neutron star in our own galaxy. Another theory, led by Christina Thone from the Instituto de Astrofísica de Andalucía in Spain, involves a “helium star” and a neutron star in orbit around each other, billions of light-years away. The third explanation – from a team led by Dr. Andrew Levan at the University of Warwick – suggests that ultra-long GRBs are simply supernova explosions from supergiant stars.