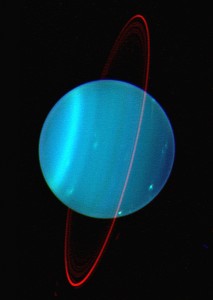 The two sides of the planet Uranus, as viewed in this composite image, by the Keck Telescope at near infrared wavelengths. These new images of the seventh planet from the sun promise to help scientists unravel the mysteries of the weather on Uranus.
Used with permission by: UW-Madison University Communications 608/262-0067
Photo by: courtesy Lawrence Sromovsky/UW-Madison Space Science and Engineering Center.
Date: 10/04 File#: scan provided

Thank you! Your submission has been received!
Oops! Something went wrong while submitting the form.
END_OF_DOCUMENT_TOKEN_TO_BE_REPLACED