How WFIRST will use warped spacetime to find exoplanets

NASA’s WFIRST mission – an infrared space observatory planned for launch around 2025 – will use the fact that the gravity of distant objects warps spacetime, bending and focusing light, thereby revealing new worlds. 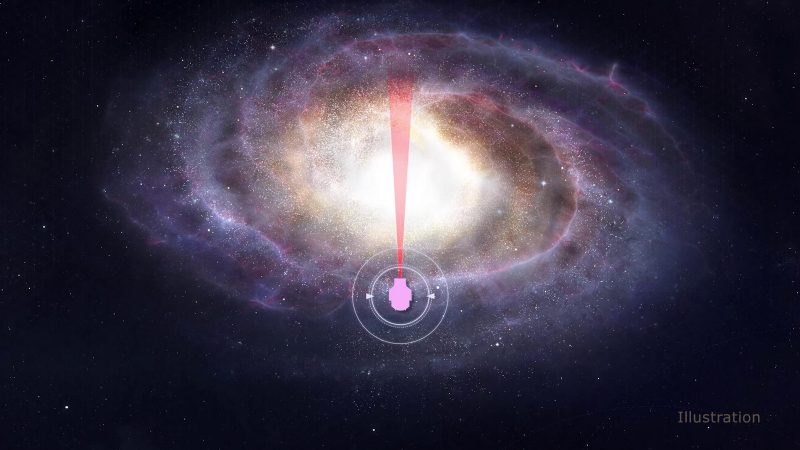 Artist’s concept of how WFIRST will use microlensing – the bending and focusing of starlight via the gravity of distant objects – to search for exoplanets. WFIRST will focus on the region near the center of our Milky Way galaxy, where stars are most densely packed. Image via NASA/ GSFC/ CI Lab/ JPL.

Most exoplanets orbiting distant stars are found by observing a planet transit, or pass in front of, its star. As the planet transits, the star’s light temporarily and minutely dims. The Wide Field Infrared Survey Telescope (WFIRST), now being developed by NASA for a possible launch in the mid-2020s, will do the opposite. It’ll search for little surges of light that occur during what are called microlensing events, or events where the gravity of distant objects warps spacetime, bending and focusing light, in this case revealing new worlds.

A statement from NASA explained microlensing:

Any time two stars align closely from our vantage point, light from the more distant star curves as it travels through the warped space-time of the nearer star. This phenomenon, one of the predictions of Einstein’s general theory of relativity, was famously confirmed by British physicist Sir Arthur Eddington during a total solar eclipse in 1919. If the alignment is especially close, the nearer star acts like a natural cosmic lens, focusing and intensifying light from the background star.

Planets orbiting the foreground star may also modify the lensed light, acting as their own tiny lenses. The distortion they create allows astronomers to measure the planet’s mass and distance from its host star. This is how WFIRST will use microlensing to discover new worlds.

The new search will combine WFIRST’s results with those of the Kepler and TESS missions. David Bennett, who leads the gravitational microlensing group at Goddard Space Flight Center in Greenbelt, Maryland, explained that WFIRST’s capabilities as a survey telescope will be key to its potential to find exoplanets:

Microlensing signals from small planets are rare and brief, but they’re stronger than the signals from other methods. Since it’s a one-in-a-million event, the key to WFIRST finding low-mass planets is to search hundreds of millions of stars. 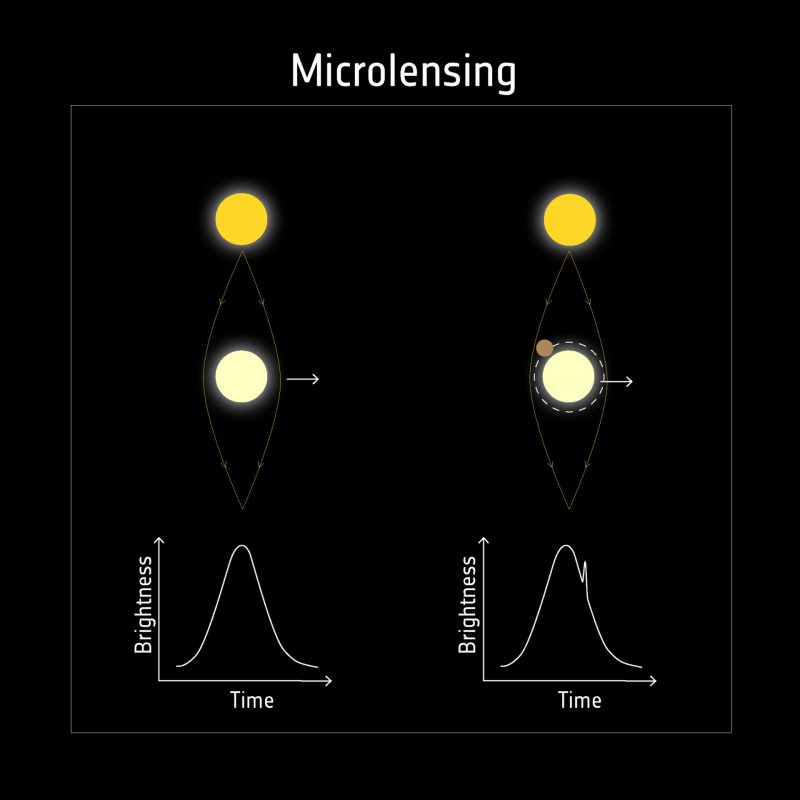 How microlensing can help find exoplanets. Microlensing depends on the chance alignment of two stars. As one star passes behind the other, the closer star acts like a lens, bending the light so that the brightness smoothly increases and decreases. If there is a planet is around the closer star, its gravity will also bend the light slightly, causing a spike that can be detected and measured by scientists. Image via ESA.

WFIRST will set its sights on the star-rich center of our Milky Way galaxy. Since WFIRST is an infrared telescope, it can see through dust clouds that block visible light. That’s especially important in planet searches near the galaxy’s center because, when we look in that direction, we see vast clouds of dust in space.

Other space-based telescopes like the TESS mission and the no-longer-active Kepler mission have looked for exoplanets around stars up to about 1,000 light-years from our sun. WFIRST will look tens of thousands of light-years away, toward the more densely populated central region of our galaxy.

So far, 86 out of more than 4,000 exoplanets found have been discovered using microlensing. Most exoplanets have been found via the transit method. But the microlensing technique has a very powerful potential: the potential to find solar systems like our own. The NASA statement explained:

The techniques commonly used to find other worlds are biased toward planets that tend to be very different from those in our solar system. The transit method, for example, is best at finding sub-Neptune-like planets that have orbits much smaller than Mercury’s. For a solar system like our own, transit studies could miss every planet.

WFIRST’s microlensing survey will help us find analogs to every planet in our solar system except Mercury, whose small orbit and low mass combine to put it beyond the mission’s reach. WFIRST will find planets that are the mass of Earth and even smaller – perhaps even large moons, like Jupiter’s moon Ganymede.

So WFIRST will be able to find other worlds with masses similar to Earth or smaller, in larger orbits. It will also be ideally suited to finding ice giants, similar to Uranus and Neptune, which may be the most common type of planet in our galaxy.

Using microlensing, WFIRST will search for planets in the habitable zones of their stars, where temperatures could allow liquid water to exist.

No one detection method can find all planets, but by combining the data from missions like WFIRST, Kepler and TESS, scientists will be able to obtain a much better idea of how many kinds of planetary systems there are. According to Matthew Penny at Louisiana State University:

Trying to interpret planet populations today is like trying to interpret a picture with half of it covered. To fully understand how planetary systems form we need to find planets of all masses at all distances. No one technique can do this, but WFIRST’s microlensing survey, combined with the results from Kepler and TESS, will reveal far more of the picture. 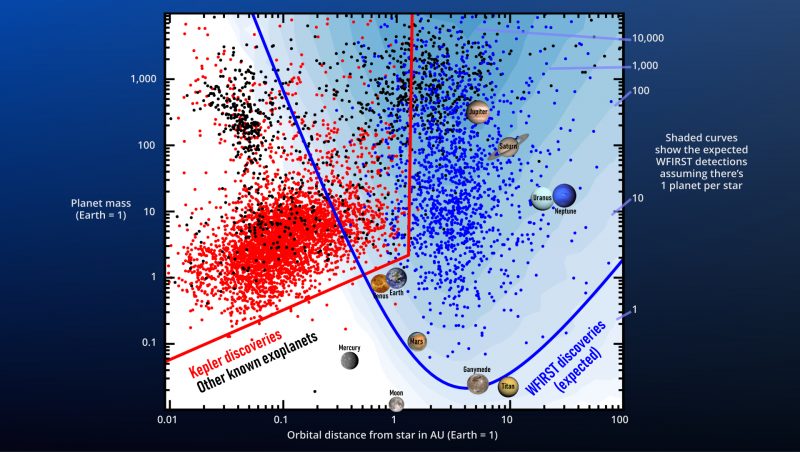 Comparison of exoplanet discoveries from the Kepler mission and other telescopes with those expected from WFIRST. Red and black dots are large planets with small orbits found by Kepler and others. WFIRST will find planets with a much wider range of masses orbiting farther from their stars (blue dots). Image via NASA/ GSFC (adapted from Penny et al. 2019).

Of the microlensing searches that have been done to date, most have been in visible light. Those searches wouldn’t be able to find planets around stars near the galaxy’s center that are obscured by dust clouds. Another microlensing survey, by the United Kingdom Infrared Telescope (UKIRT) in Hawaii, has been mapping the central region since 2015. This will help pave the way for WFIRST’s upcoming observations by measuring the rate of microlensing events near the galaxy’s core.

UKIRT uses machine learning, which will also be used by WFIRST to help streamline the enormous amount of data. Savannah Jacklin, an astronomer at Vanderbilt University in Nashville, Tennessee, said:

Our current survey with UKIRT is laying the groundwork so that WFIRST can implement the first space-based dedicated microlensing survey. Previous exoplanet missions expanded our knowledge of planetary systems, and WFIRST will move us a giant step closer to truly understanding how planets – particularly those within the habitable zones of their host stars – form and evolve. 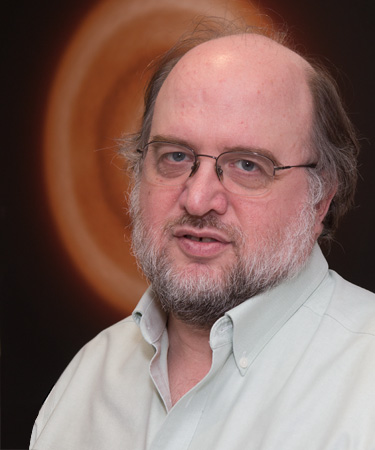 As exciting as finding new worlds near the center of our galaxy is, WFIRST will be able to discover other fascinating objects as well. This includes free-floating planets, as small as Mars, not orbiting any stars, and brown dwarfs, which are too large to be planets but too small to be stars. WFIRST could also find neutron stars and black holes. Penny said:

WFIRST’s microlensing survey will not only advance our understanding of planetary systems, it will also enable a whole host of other studies of the variability of 200 million stars, the structure and formation of the inner Milky Way, and the population of black holes and other dark, compact objects that are hard or impossible to study in any other way.

WFIRST and its microlensing capabilities represent a huge step forward in the search for new exoplanets and other amazing objects in the central part of our galaxy, a region brimming with new discoveries yet to be made.

Bottom line: The upcoming WFIRST space telescope mission will use microlensing – which relies on massive objects in space bending spacetime – to search for exoplanets near the center of our Milky Way galaxy.