Astronomers used Hubble Space Telescope images to spot a star system that could have left behind a “zombie star” after an unusually weak supernova explosion. 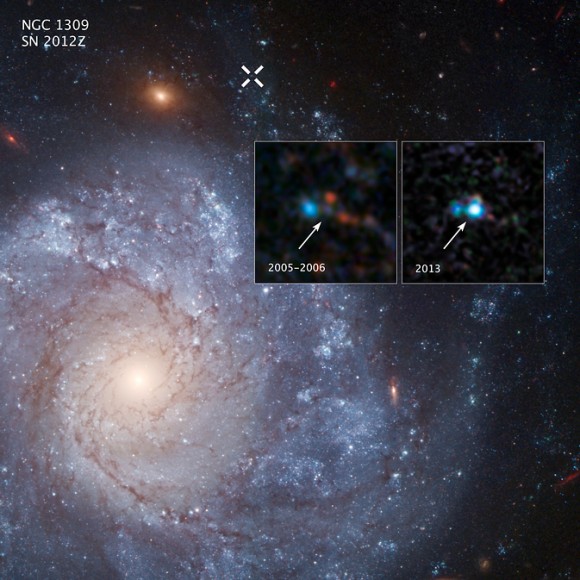 Here is the spiral galaxy NGC 1309. The two inset images show before-and-after images of Supernova 2012Z, as captured by the Hubble Space Telescope. The white X at the top of the main image marks the location of the supernova in the galaxy. Image via NASA, ESA

Astronomers are scrutinizing a star system in a distant galaxy that exploded, possibly leaving behind a zombie star. They say their study of this system will help them understand supernova explosions, which are an important piece of the cosmic puzzle, used to help measure distances in vast space and the expansion of the universe.

Standard Type Ia supernovae occur when a white dwarf draws enough material from a companion star onto itself to raise its own core temperature, ultimately creating a runaway nuclear reaction that causes the white dwarf to explode as a supernova. In such cases, the explosion typically completely obliterates the white dwarf.

In this system, though, scientists think the supernova was weak enough that it might have left behind a portion of the dwarf star. They’re calling this leftover portion a sort of zombie star. The supernova – categorized as a Type Iax – is called SN 2012Z. It resides in the galaxy NGC 1309, some 110 million light-years from our sun and Earth. The work is published in the August 6, 2014 edition of the journal Nature.

The Lick Observatory’s Supernova Search first identified SN 2012Z two years ago. These astronomers used Hubble Space Telescope images of the supernova’s host galaxy – taken in 2005, 2006 and 2010 – before the explosion took place. In these images, the astronomers identified what appears to be a blue companion star feeding energy to a white dwarf, at the site of the future supernova. They say it may be the progenitor to SN 2012Z, the system that existed before the supernova disrupted it. Curtis McCully, a graduate student at Rutgers and lead author of the team’s paper, sharpened the Hubble pre-explosion images and noticed a peculiar object near the location of the supernova. He said:

I was very surprised to see anything at the location of the supernova. We expected the progenitor system would be too faint to see, like in previous searches for normal Type Ia supernova progenitors. It is exciting when nature surprises us.

Astronomers have been searching for decades for the star systems that produce Type Ia supernova explosions. Type Ia’s are important because they’re used to measure vast cosmic distances and the expansion of the universe. But we have very few constraints on how any white dwarf explodes. The similarities between Type Iax’s and normal Type Ia’s make understanding Type Iax progenitors important, especially because no Type Ia progenitor has been conclusively identified. This discovery shows us one way that you can get a white dwarf explosion.

The team plans to use Hubble again in 2015 to observe the area, giving time for the supernova’s light to dim enough to reveal any possible zombie star and helium companion to confirm their hypothesis.

Read more about the potential zombie star from NASA