Waves in the atmosphere of Venus

Using the Venus Express spacecraft, scientists have identified four types of waves in the atmosphere of Venus: long, medium, short and irregular. 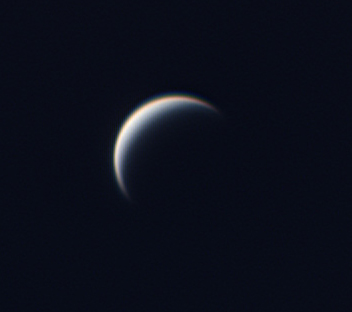 As seen through earthly telescopes, Venus has no features in its atmosphere. We do, however, see the planet exhibiting phases, like the moon. Image via Marc Lecleire and Wikimedia Commons.

There was a time when earthly observers described Venus as featureless. After all, when we gaze toward our neighbor planet through earthly telescopes, we see a world blanketed in apparently featureless clouds. Closer observations via spacecraft – especially those using infrared and radar detectors – have let us begin to explore more detail on this formerly featureless world, both on its surface and in its atmosphere. Now the European Space Agency (ESA) reported this morning (January 13, 2014) that a study of gravity waves in Venus’ atmosphere has found four types of atmospheric waves: long, medium, short and irregular.

A camera aboard ESA’s Venus Express spacecraft was used to identify the waves. They were mostly found at high latitudes on Venus (60-80 degrees N) in a region of high cloud known as the cold collar. The waves were concentrated above the continent-sized highland of Ishtar Terra on Venus.

The detection of these waves and their association with a geological feature strengthens the case that features on the surface of Venus are a factor in driving the planet’s atmospheric circulation.

Bottom line: The European Space Agency reported on January 13, 2014 that a study of gravity waves in Venus’ atmosphere has found four types of waves: long, medium, short and irregular.

Via the European Space Agency