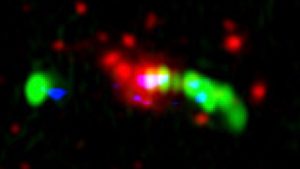 The Spiderweb Galaxy as seen by the Hubble Space Telescope (optical) in red, the Very Large Array (radio) in green and the Atacama Large Millimeter/submillimeter Array (submillimeter) in blue. The red color shows where the stars are located within this system of galaxies. The radio jet is shown in green, and the position of the dust and water are seen in blue. The water is located to the left and right of the central galaxy. The water to the right is at the position where the radio jet bends down wards. The dust is also seen in blue. The dust is located at the central galaxy and in smaller companion galaxies in its surroundings. Credit: NASA, ESA-Hubble, STScI, NRAO, ESO

Thank you! Your submission has been received!
Oops! Something went wrong while submitting the form.
END_OF_DOCUMENT_TOKEN_TO_BE_REPLACED