Water worlds may be abundant in our galaxy

A new study suggests that our Milky Way galaxy is filled with planets like Earth, containing continents and oceans. If so, life might be common in the Milky Way. 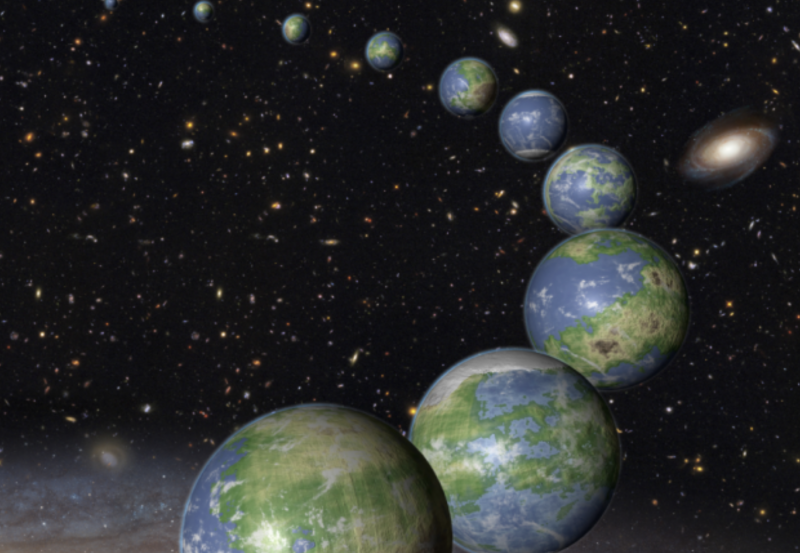 Artist’s concept of an abundance of water worlds, perhaps some similar to Earth. A new study suggests that – rather than coming to Earth accidentally, after it formed – water might be a key component in planets as they form. If so, oceans might be regular features on planets across our Milky Way galaxy. Image via University of Copenhagen/ NASA/ ESA/ G. Bacon (STScI).

Scientists at the University of Copenhagen said on February 17, 2021, that their new computer models confirm the theory of pebble accretion – that is, that the planets in our solar system formed through accumulations of tiny bits of dust and ice – and that water was a common component in these planetary building blocks. Water is essential to life as we know it. In the past, it’s been thought Earth’s water might have come to it after formation, by chance, for example via icy comets striking Earth. If instead Earth formed with its water, then Venus and Mars might have formed with water, too. Working off a key tenet in science – that we should never presume we’re a special case – these scientists suggest water might be abundant on Earth-sized planets throughout our Milky Way galaxy.

Are there myriad worlds in our galaxy with continents and oceans? The new study points to that possibility. If it’s so, that fact could also point to an abundance of life in our home galaxy.

A study published February 17, 2021, in the peer-reviewed journal Science Advances details the team’s pebble accretion theory and how water may be instrumental in building planets across the galaxy. Scientists have observed disks around young stars made up of several hundred Earth-masses of pebbles. The collisions and clumping in these discs form protoplanets and eventually planets. Water would have been one of the molecules present as the planetesimals accumulated material and grew. 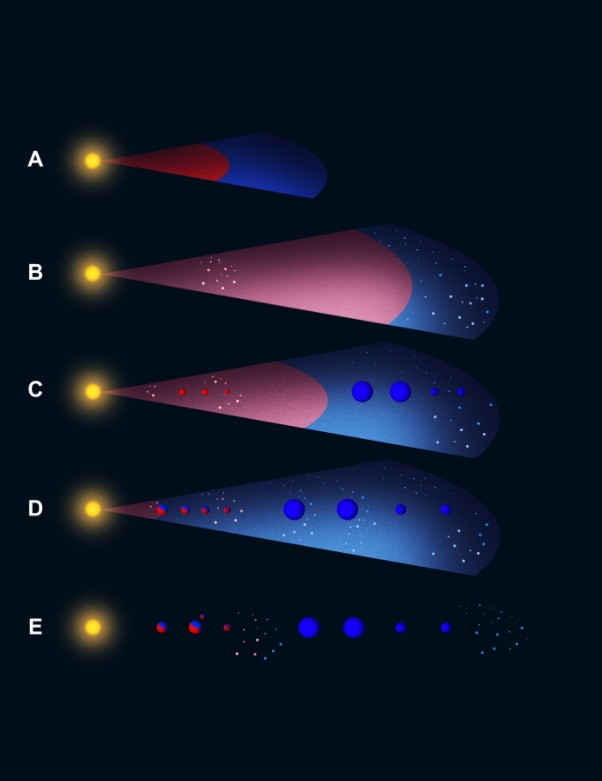 In this diagram, drawings A through E show the evolution of the inner and outer planets in our solar system due to the process of pebble accretion. Image via University of Copenhagen/ Science Advances.

If the ingredients exist for water in all planets, then the crucial circumstance for finding liquid water on a planet would be if the planet is within the habitable zone of its star. As Anders Johansen of Lund University and the University of Copenhagen said:

All our data suggest that water was part of Earth’s building blocks, right from the beginning. And because the water molecule is frequently occurring, there is a reasonable probability that it applies to all planets in the Milky Way. The decisive point for whether liquid water is present is the distance of the planet from its star … All planets in the Milky Way may be formed by the same building blocks, meaning that planets with the same amount of water and carbon as Earth – and thus potential places where life may be present – occur frequently around other stars in our galaxy, provided the temperature is right.

The pebble accretion theory of planet formation is not new. Johansen and his team have been working on the theory for a decade. The recent computer models helped confirm their theory by showing that millimeter-sized dust particles of ice and carbon that surround young stars come together to create pebbles, boulders, and eventually planets. As a planet condenses and heats up, much of the water evaporates before becoming incorporated into the planet’s makeup. As Johansen explained:

Up to the point where Earth had grown to 1% of its current mass, our planet grew by capturing masses of pebbles filled with ice and carbon. Earth then grew faster and faster until, after five million years, it became as large as we know it today. Along the way, the temperature on the surface rose sharply, causing the ice in the pebbles to evaporate on the way down to the surface so that, today, only 0.1% of the planet is made up of water, even though 70% of Earth’s surface is covered by water.

To extrapolate their findings across the galaxy, if other planets have the same building blocks and the same temperature conditions as Earth, there will also be a good chance that they’ll have a similar abundance of water and continents as our planet. 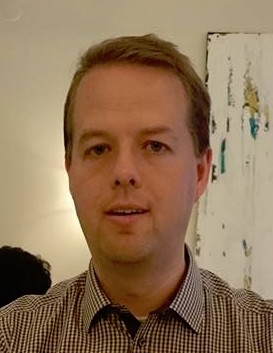 Anders Johansen led the study of pebble accretion and its implications for water worlds across the galaxy. Image via University of Copenhagen.

The team is excited for the next generation of telescopes that will help them learn more about water on planets. Johansen said:

The new telescopes are powerful. They use spectroscopy, which means that by observing which type of light is being blocked from the planets’ orbit around their star, you can see how much water vapor there is. It can tell us something about the number of oceans on that planet.

Bottom line: The pebble accretion model of planet formation incorporates water as one of the building blocks. Water, which is common in the galaxy, could also be common on planets that lie at the right distance from their home stars.

Source: A pebble accretion model for the formation of the terrestrial planets in the Solar System