Watching the seasons change in the atmosphere of Titan

Who would have imagined we’d be able to watch the seasons change in the atmosphere of Saturn’s large moon Titan? The Cassini spacecraft makes it possible.

Data from NASA’s Cassini mission to Saturn is giving space scientists a clearer picture of seasonal changes on Titan, Saturn’s large moon. The image below is an artist’s impression, showing seasonal change in Titan’s atmosphere during and after Titan’s 2009 equinox. An equinox for Earth or any planet or moon occurs when the sun appears over that world’s equator at local noon. It’s a seasonal marker, in this case a time when both hemispheres of a world are receiving more or less equal heating from the sun. Scientists say the change in seasons on Titan before and after this equinox involved a wholesale reversal, at unexpected altitudes in the circulation of Titan’s atmosphere. 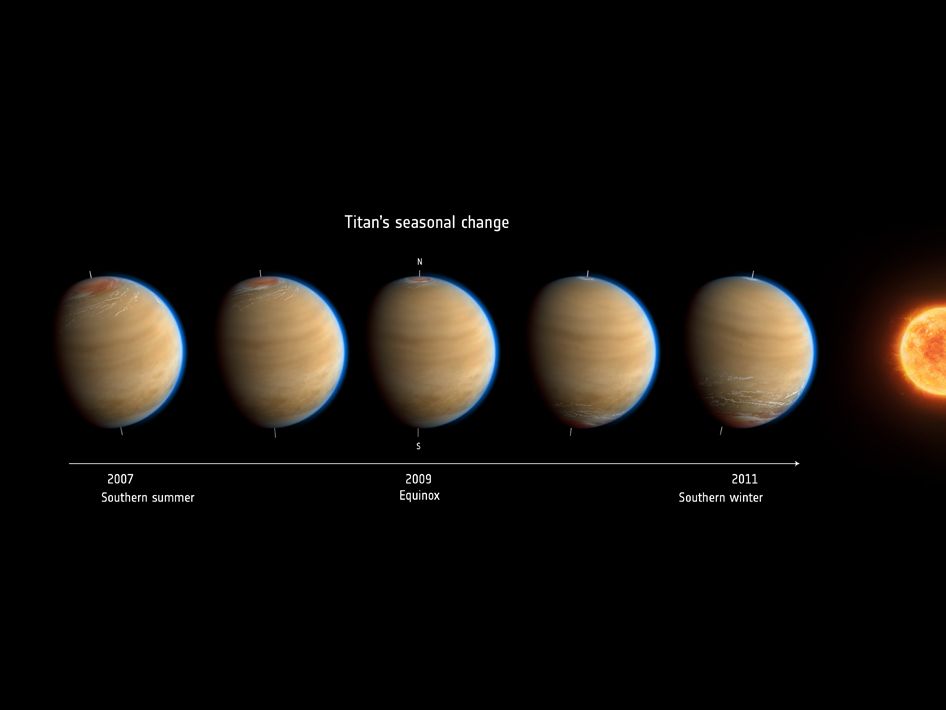 The Cassini spacecraft arrived at Saturn in 2004. During the first years of its exploration, it was winter in Titan’s northern hemisphere. The north pole of Titan was seen to have a “hood” of dense gaseous haze (shown in white in the image above, shown larger in the image below), and a high-altitude “hot spot” (show in red, above). This haze was associated with a vortex above Titan’s north pole.

And then the season changed. After Titan’s 2009 equinox, the moon’s north pole began tilting more in the direction towards the sun. Spring was arriving in Titan’s northern hemisphere. Meanwhile, the moon’s southern hemisphere was tilting away from the sun and moving into autumn. 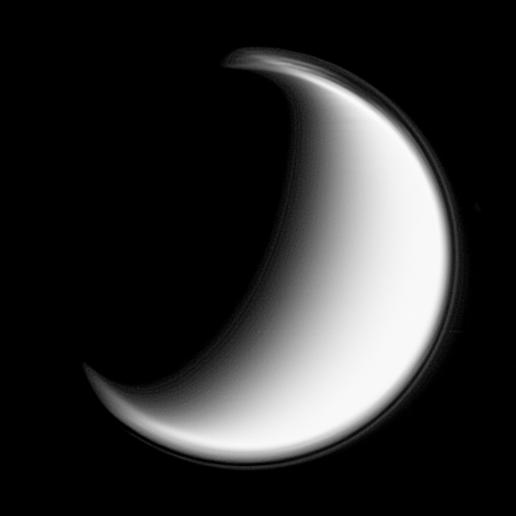 This composite of 24 Cassini images shows the north polar hood (at top) in Titan’s atmosphere. It also shows multiple layers in Titan’s stratospheric haze. The most prominent layer is located about 500 kilometers (300 miles) above the surface and is seen at all latitudes, encircling the moon. The material in this layer is probably a condensed substance, possibly water ice. Image Credit: NASA/JPL/Space Science Institute

After Titan’s equinox and until 2011, there was still a significant build up of trace gases over the north pole, even though the north pole vortex, and the observed hot spot, had almost disappeared.

Meanwhile, similar features began developing at the south pole, for example, a south pole vortex, which are still present today.

In a press release, Cassini scientists said these changes indicate:

… a large-scale reversal in the single pole-to-pole atmospheric circulation cell of Titan immediately after equinox, with an upwelling of gases in the summer hemisphere and a corresponding downwelling in the winter hemisphere. 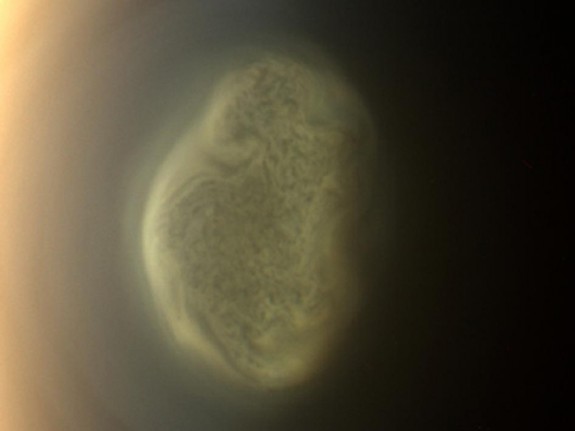 Soon after Cassini arrived in the Saturn system in 2004, it discovered an atmospheric vortex above Titan’s north pole. Now, as the seasons have changed, the north pole vortex has vanished, and Cassini sees a vortex at the south pole of Titan. This true color image captured by Cassini on June 27, 2012 shows Titan’s south polar vortex, a mass of swirling gas. Image credit: NASA/JPL-Caltech/Space Science Institute

Next, we would expect to see the vortex over the south pole build up. As that happens, one question is whether the south winter pole will be the identical twin of the north winter pole, or will it have a distinct personality? The most important thing is to be able to keep watching as these changes happen.

And watch they will, as long as the wonderful Cassini spacecraft continues sending back its data.

Bottom line: Who would have imagined a few decades ago that we’d be able to watch the seasons change on Saturn’s large moon Titan. And yet the Cassini spacecraft, which has been orbiting in and around the Saturnian system since 2004, lets us do just that. Scientists have seen what they’re calling a wholesale reversal in the atmosphere of Titan, from 2004 to now.

Read more about the reversal in Titan’s atmospheric circulation here.