Time-lapse by the Cassini spacecraft shows methane clouds moving across northern regions of Saturn’s largest moon, Titan, on October 29­­­­ and 30.

In the above time-lapse, captured on October 29­­­­ and 30, 2016, NASA’s Cassini spacecraft watches clouds of methane moving across the far northern regions of Saturn’s largest moon, Titan.

Cassini has been orbiting Saturn since 2004 and is now in its final year.

Here’s NASA’s description of what’s happening in the time-lapse, above:

Several sets of clouds develop, move over the surface and fade during the course of this movie sequence, which spans 11 hours, with one frame taken every 20 minutes. Most prominent are long cloud streaks that lie between 49 and 55 degrees north latitude. While the general region of cloud activity is persistent over the course of the observation, individual streaks appear to develop then fade. These clouds are measured to move at a speed of about 14 to 22 miles per hour (7 to 10 meters per second).

There are also some small clouds over the region of small lakes farther north, including a bright cloud between Neagh Lacus and Punga Mare, which fade over the course of the movie. This small grouping of clouds is moving at a speed of about 0.7 to 1.4 miles per hour (1 to 2 meters per second). 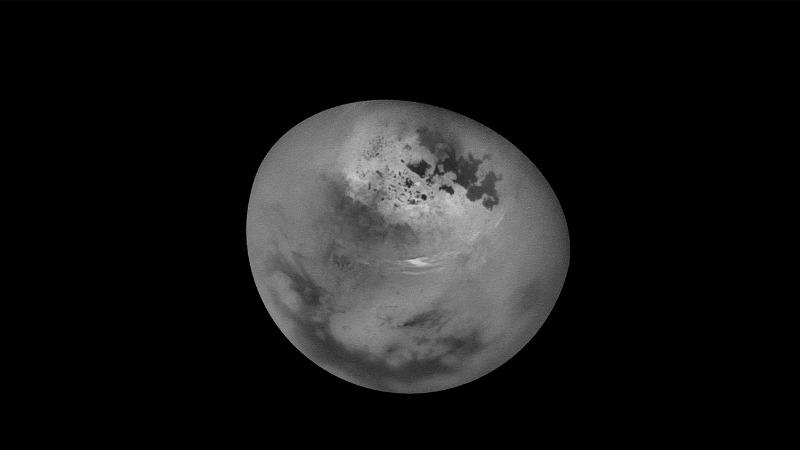 This year, Cassini has intermittently observed clouds across Titan’s the northern mid-latitudes and north polar region – an area known to contain numerous methane/ethane lakes and seas. But most of the observations have been short snapshots taken days, or weeks, apart. Time-lapse movies like this allow scientists to observe the dynamics of clouds as they develop, move over the surface and fade.