Lift off! 4 astronauts in Crew-2 mission blast off to ISS

The launch of Crew-2, the 2nd flight of this particular Crew Dragon, went off without a hitch Friday morning, after being postponed due to weather. 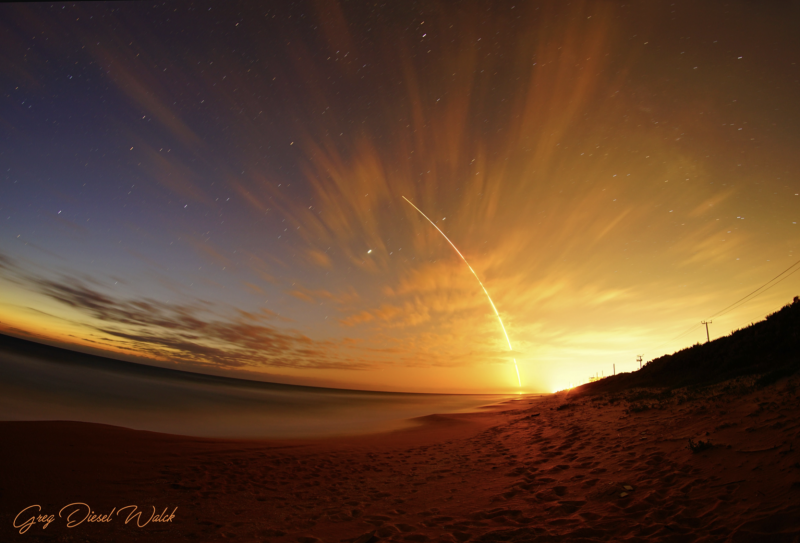 SpaceX’s launch of its Crew-2 mission on Friday morning, April 23, 2021, was spectacular by all accounts. The Falcon 9 rocket carrying a Crew Dragon capsule lit up the predawn skies over historic pad 39A at NASA’s Kennedy Space Center in Florida, blasting off at 5:49 a.m. Eastern (09:49 UTC). Riding aboard the Dragon for the April 23 launch are four veteran astronauts: from ESA, Thomas Pesquet; from JAXA, Akihiko Hoshide, and from NASA, Shane Kimbrough and Megan McArthur. They will dock with the International Space Station (ISS) about 24 hours after launch.

The launch was originally scheduled for April 22, but had been postponed due to weather conditions and was rescheduled for Friday, April 23, 2021. Check NASA TV listings for the scheduling of the livestreams, which will run periodically until its undocking and splashdown next Wednesday.

That was the coolest launch I've seen!!!!! The white streak is the booster returning and being illuminated by the rising sun. Just stunning visually watching in person! #SpaceX #NASA #Crew2 pic.twitter.com/9EnQCAOBGR 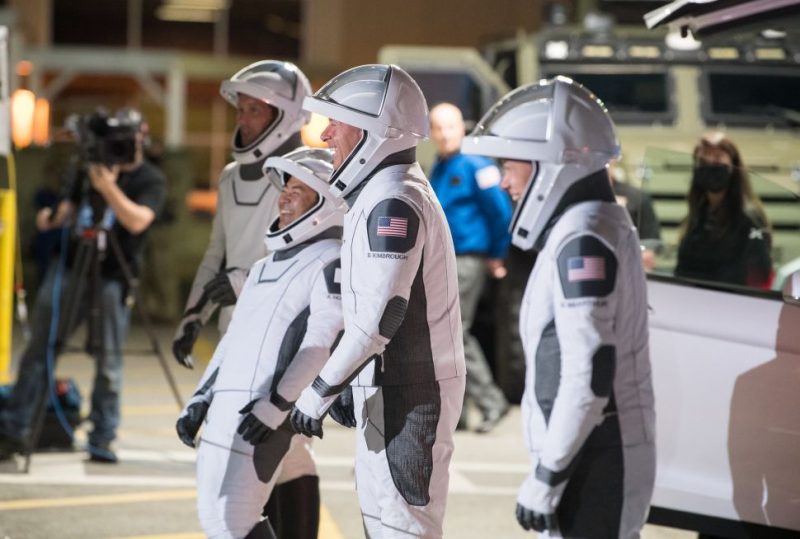 From left to right, ESA astronaut Thomas Pesquet, JAXA astronaut Akihiko Hoshide, and NASA astronauts Shane Kimbrough and Megan McArthur prepare to depart the Neil A. Armstrong Operations and Checkout Building for Launch Complex 39A – at NASA’s Kennedy Space Center in Florida – during an April 18, 2021, dress rehearsal prior to the Crew-2 mission launch. Image via credit Aubrey Gemignani/ NASA/ Space.com.

The Crew Dragon capsule is named Endeavour. It first carried NASA astronauts Bob Behnken and Doug Hurley to and from the space station last year for the Demo-2 test flight.

The mission will also be the second flight for the first stage booster, which previously ferried the Crew-1 astronauts to the space station last year.

Before liftoff, the teams went through their checklists and only found one minor issue to work through. According to Space.com, it concerned how much liquid oxygen is loaded onto the launch vehicle. Falcon 9 relies on two components to fuel its trips to space: rocket-grade liquid kerosene and liquid oxygen. According to Bill Gerstenmaier, the vice president of build and flight reliability at SpaceX, the teams detected a small discrepancy concerning unexpected amounts of liquid oxygen.

But then over the weekend, both Falcon and Dragon passed two big tests: a static fire test and a dress rehearsal (full systems test) with the crew. Both exercises were executed flawlessly and the mission received the green light to proceed with Thursday’s early morning liftoff.

And then Tuesday, during a prelaunch news conference, Benji Reed, senior director of human spaceflight at SpaceX, said that the liquid oxygen issue had been resolved. Reed added:

It’s a very exciting time, and we’re looking forward to a successful mission.

At historic Launch Complex 39A, @Astro_Kimbrough & @Astro_Megan make their way across the crew access arm walkway to their Crew Dragon spacecraft, as @Thom_Astro & @Aki_Hoshide follow: pic.twitter.com/xKuIlKCpE8 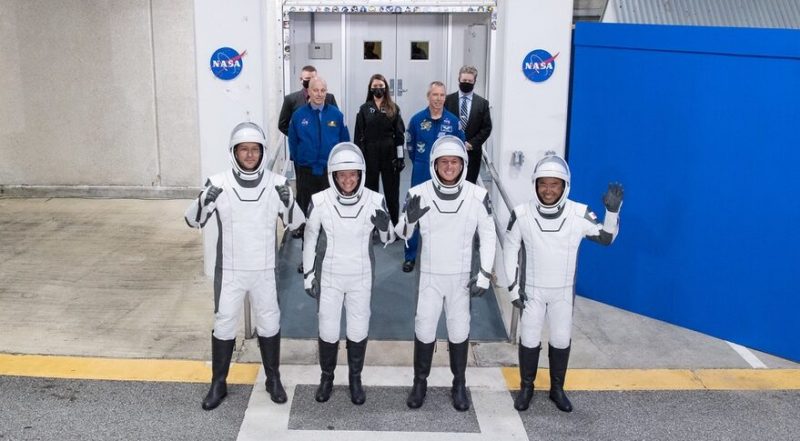 Astronauts (from left) Thomas Pesquet, Megan McArthur, Shane Kimbrough and Akihiko Hoshide wave as they walk out of the Neil A. Armstrong Operations and Checkout Building to head to the pad for the launch of the Crew-2 mission this morning. Image via NASA/ Aubrey Gemignani.

Bottom line: Crew-2, the second flight of this particular Crew Dragon, blasted off on a SpaceX Falcon 9 rocket at 5:49 a.m. Eastern (09:49 UTC) this morning, April 23, 2021, from Pad 39A at the Kennedy Space Center in Florida. The mission will be live-streamed periodically through splashdown via NASA TV.