SpaceX is scheduled to launch its Dragon spacecraft resupply mission to the International Space Station no earlier than 10:01 a.m. EST (1501 UTC) on Saturday, February 18. How to watch. 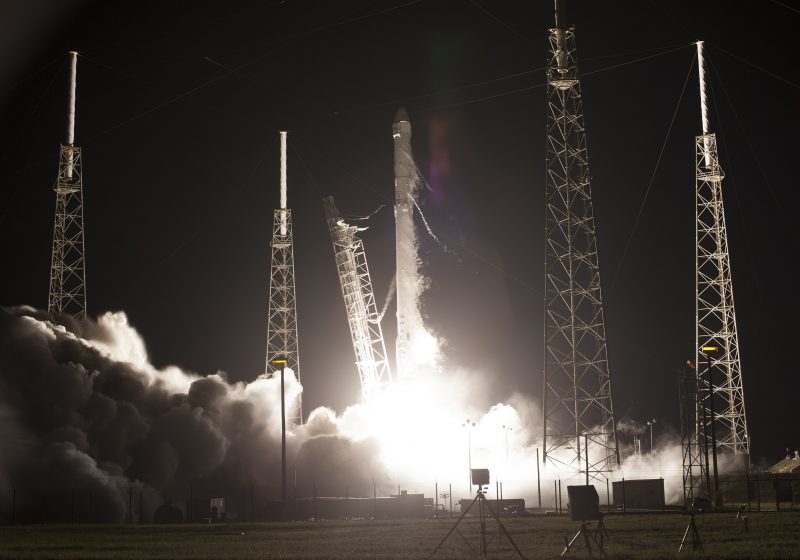 On July 18, 2016, SpaceX’s Falcon 9 rocket lifted off from Cape Canaveral in Florida, carrying the Dragon resupply spacecraft to the International Space Station for the company’s ninth commercial resupply mission. SpaceX currently is targeting Saturday, February 18, 2017 for its 10th resupply mission, this time launching from launch complex 39A at NASA’s Kennedy Space Center in Florida. Image via NASA/Tony Gray

The SpaceX Dragon spacecraft will lift off on the company’s Falcon 9 rocket. SpaceX is planning to attempt to land its Falcon 9 first stage on land.

The SpaceX Dragon is packed with science experiments, crew supplies and hardware.

According to a statement for NASA:

About 10 minutes after launch, Dragon will reach its preliminary orbit, deploy its solar arrays and begin a carefully choreographed series of thruster firings to reach the space station.

Astronauts Shane Kimbrough of NASA and Thomas Pesquet of ESA (European Space Agency) will use the station’s robotic arm to capture Dragon when it arrives at the space station after its two-day journey. The spacecraft will be berthed to the Earth-facing port on the Harmony module. The following day, the space station crew will pressurize the vestibule between the station and Dragon, then open the hatch that leads to the forward bulkhead of Dragon.

For about a month, crew members will unload the spacecraft and reload it with cargo to return to Earth, NASA said. About five-and-a-half hours after it departs the station on March 21, it will splash down in the Pacific Ocean, off the coast of Baja California.

You can find an updated schedule of prelaunch briefings, events and NASA TV coverage here.

Bottom line: Watch the launch of the SpaceX Dragon spacecraft resupply mission to the International Space Station on Saturday, February 18, 2017.