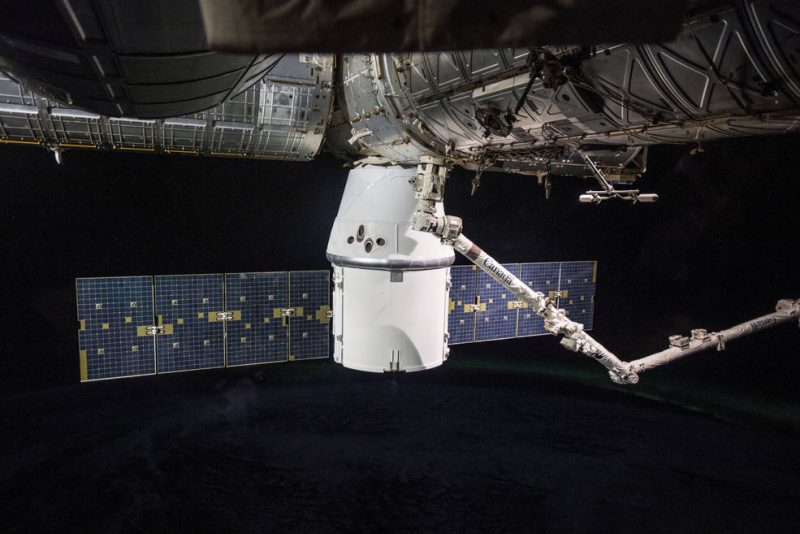 After delivering more than 5,800 pounds of science investigation materials and cargo for NASA, a SpaceX Dragon cargo spacecraft is set to depart the International Space Station (ISS) on Wednesday, May 2, 2018. Dragon is the only space station resupply spacecraft able to return to Earth intact.

Here’s what will be happening, according to a NASA statement:

Flight controllers on Earth will use the Canadarm2 robotic arm to detach the Dragon capsule, which arrived April 4, 2018, from the Earth-facing side of the station’s Harmony module. After maneuvering Dragon into place, they will give the command to release the spacecraft as Expedition 55 Flight Engineer Scott Tingle of NASA monitors its departure at 10:22 a.m. EDT.

Dragon’s thrusters will be fired to move the spacecraft a safe distance from the station before SpaceX flight controllers in Hawthorne, California, command its deorbit burn.

The capsule will splash down about 4:02 p.m. EDT (20:02 UTC; translate to your time) in the Pacific Ocean, where a recovery team will retrieve the capsule and more than 4,000 pounds of cargo, including science samples from human and animal research, biology and biotechnology studies, physical science investigations and education activities. The deorbit burn and splashdown will not be broadcast on NASA TV.

In the event of adverse weather conditions in the splashdown zone in the Pacific, the departure and splashdown will occur on the backup date of May 5.

Bottom line: A SpaceX Dragon cargo spaceship is scheduled to depart the International Space Station on May 2, 2018. How to watch.