The Cassini spacecraft, orbiting Saturn, captured this mini-eclipse of a star by Iapetus on August 10.

Here is Saturn’s fascinating little moon Iapetus, drifting in front of a well-known star in the constellation Orion. The star is called Bellatrix (Gamma Orionis). The Cassini spacecraft – which has been orbiting Saturn since 2004 – captured this event with narrow-angle camera on August 10, 2013. Cassini mission scientists assembled the animation from 19 raw images, stacked in Photoshop.

You might think of this event, the passage of Iapetus in front of a distant star, as a mini-eclipse, and so it is. Astronomers, though, would tend to use the word occultation for this event. Check out the images below for more about Iapetus.

Iapetus is a two-toned moon. The leading hemisphere and sides are dark with a slight reddish-brown coloring, while most of the trailing hemisphere and poles are bright. Image via NASA/JPL/Space Science Institute

A mountain range on Iapetus, via NASA/JPL/Space Science Institute 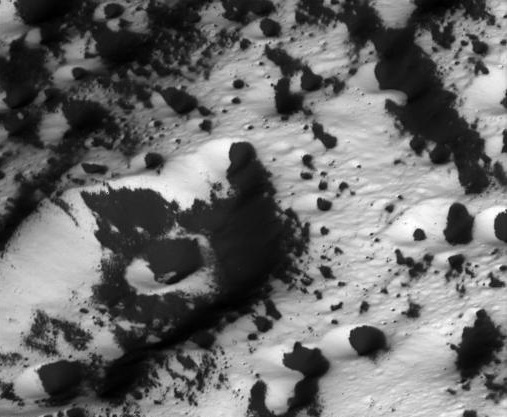