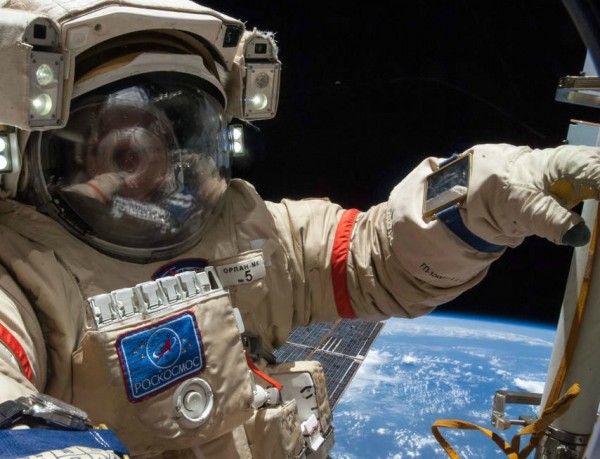 Russian cosmonaut Alexander Skvortsov, Expedition 40 flight engineer is pictured in this close-up view during a session of extravehicular activity (EVA) in 2014. During the five-hour, 11-minute spacewalk, Skvortsov and cosmonaut Oleg Artemyev (out of frame) deployed a small science satellite, retrieved and installed experiment packages and inspected components on the exterior of the orbital laboratory. Image via NASA.

On Wednesday, February 3, 2016, NASA TV will broadcast live coverage of a spacewalk by two Russian cosmonauts aboard the International Space Station (ISS). The coverage will begin at 7:30 a.m. ET (1230 UTC). The spacewalk itself will start at approximately 8:10 a.m. ET (1310 UTC) and last 5.5 hours. Watch here.

The ISS cosmonauts – Expedition 46 Flight Engineers Yuri Malenchenko and Sergey Volkov of Roscosmos – will deploy and retrieve several experiment packages on the Zvezda and Poisk modules and install devices called gap spanners, which will be placed on the hull of the station to facilitate the movement of crew members on future spacewalks.

Malenchenko and Volkov also will install the Vinoslivost experiment, which will test the effects of the space environment on various structural material samples, and test a device called the Restavratsiya experiment, which could be used to glue special coatings to external surfaces of the station’s Russian segment.

The pair will retrieve the EXPOSE-R Experiment, a collection of biological and biochemical samples placed in the harsh environment of space. The EXPOSE program is part of the European Space Agency’s (ESA) research into astrobiology, or the study of the origin, evolution and distribution of life in the universe.

The spacewalk will be the 193rd in support of space station assembly and maintenance, the sixth spacewalk for Malenchenko and the fourth spacewalk for Volkov. Both will wear Russian Orlan spacesuits bearing blue stripes.