There’s nothing to fear from 2002 AM31. It’ll pass within 14 times the moon’s distance from Earth. But you might enjoy watching it sweep past!

An asteroid the size of a city block will make its closest approach to Earth on Sunday, July 22. The asteroid is estimated to be 620 meters to 1.4 kilometers (2,000 to 4,500 feet wide). It’ll pass within 14 times the moon’s distance from Earth, or within 4.65 million miles. Nothing to fear. The Slooh Space Camera will cover its near approach live. The show stars July 22 at 4:30 p.m. PDT / 7:30 p.m. EDT / 23:30 UTC. Astronomers will be on hand to discuss the asteroid. Slooh has done a great job recently onother events of this kind. Enjoy! 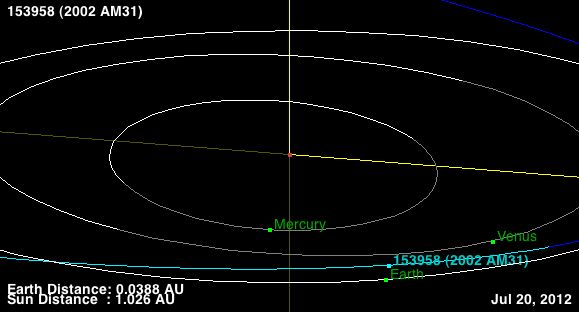 The asteroid 2002 AM31 is not a surprise, by the way. As its name suggests, it has been known since the year 2002, when the Lincoln Near Earth Asteroid Research (LINEAR) program discovered it.

This asteroid sweeps past just 39 days after newly discovered asteroid 2012 LZ1 paid an unexpected visit to Earth in June.

This is not asteroid 2002 AM31. This is another asteroid, 2012 LZL, which the Slooh cameras captured as it closely approach Earth on June 14, 2012. During the July 22 passage of 2002 AM31, Slooh’s cameras will probably captured images similar to this one. Image via Slooh.

Bottom line: Asteroid 2002 AM31 will pass within about 14 times the moon’s distance from Earth on Sunday late afternoon and evening, July 22 (U.S. time). The Slooh Space Camera team will cover the event live. The public is invited. It is free.
‘