Watch online as the moon sweeps in front of Saturn 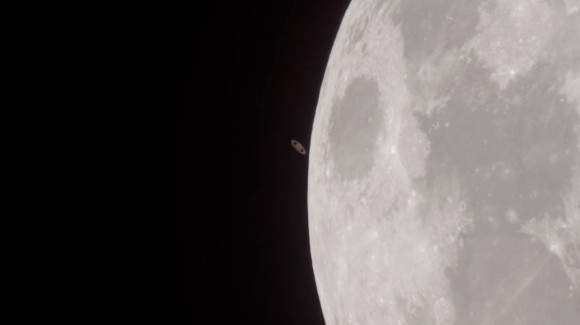 Saturn and the moon (r) shortly after an occultation of Saturn by the moon, on May 14, 2014, in Western Australia. Photo by Colin Legg Photography. See more photos by Colin Legg on his Facebook page.

In 2014, the ringed planet Saturn and Earth’s moon are in a cycle of 13 occultations – events during which the moon covers Saturn – that advance from Antarctica through the Northern Hemisphere over the year. Southern Hemisphere stargazers have already been enjoying these Saturn occultations, as the photos on this page show. And tomorrow morning – if you get up early – you can watch this dramatic event online: the moon covering Saturn! Astronomers call this event an occultation of Saturn by the moon.

Slooh will broadcast this event live from multiple telescope installations in Australia. Click here to go to Slooh’s broadcast page. They’re describing it as:

Watch during the broadcast as the moon hogs the spotlight and crosses in front of Saturn and its moons, blocking them from our field of view. Coverage will begin on Monday, August 4, starting at 4 a.m. PDT / 7 a.m. EDT / 11:00 UTC. Viewers can watch free on Slooh.com using their favorite device. The live image stream will be hosted by Geoff Fox, accompanied by expert commentary from Slooh astronomer Bob Berman and Slooh engineer Paul Cox. Viewers can ask questions during the show by using hashtag #SloohMoonBomb 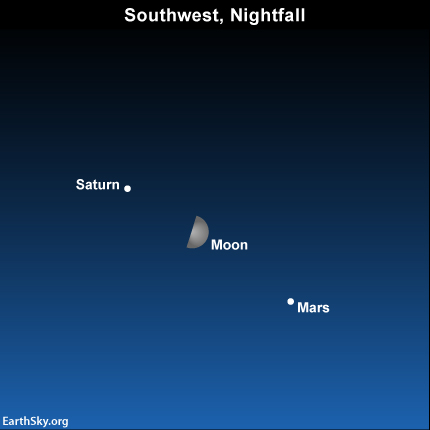 As seen from North America Sunday evening – August 3 – the moon is between Saturn and Mars. Click here for more details on N. America’s view.

As seen from North America, the view starts out with a bang Sunday evening, August 3, during the first few hours after nightfall, when the moon hovers dramatically between Mars and Saturn. This 3-way line-up will be obvious to anyone who looks up, even from light-polluted cities, and no telescope is required.

After the moon and two planets set in North America, the moon keeps moving eastward against the background stars until it covers up Saturn as seen from parts of Earth’s Eastern Hemisphere. Slooh astronomer Bob Berman said:

Such an eclipse is called an occultation, and it’s quite dramatic when it involves a bright photogenic object like Saturn, whose rings are now nearly optimally tilted. Slooh’s live feeds from Australia will capture the actual eclipse of Saturn by the moon, with striking detail visible on the foreground moon and the background planet — a true photobomb moment. This is one of those don’t-miss events.

Individuals living in select parts of the Eastern Hemisphere, such as Australia, will be able to look up with the naked eye and see the planet Saturn eclipsed by the moon. Without a telescope, Saturn will look like a bright star.

Will a Saturn occultation be visible from North America? The August 4, 2014 occultation will not. However, the Observer’s Handbook of the Royal Astronomical Society of Canada said:

The only occultation from a populated area of North America crosses the eastern U.S. and southeastern Canada, taking place (in daytime) on August 31. 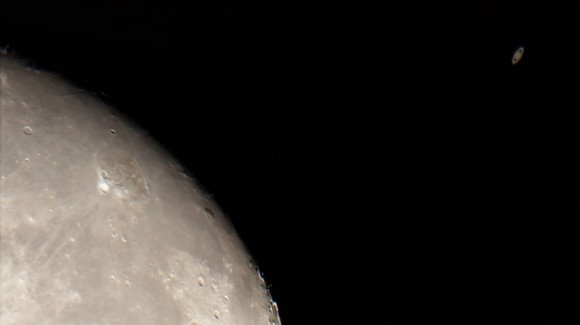 Moon (l) and Saturn shortly after an occultation of Saturn by the moon, on June 11, 2014, in Western Australia. Photo by Colin Legg Photography. See more photos by Colin Legg on his Facebook page.

Bottom line: Watch online via a Slooh broadcast from Australia as the moon photobombs (occults) Saturn on the morning of August 4, by N. American clocks. Coverage will begin on Monday, August 4, starting at 4 a.m. PDT / 7 a.m. EDT / 11:00 UTC.