Asteroid 2014 KH39 will pass just outside the moon’s distance on Tuesday, June 3, at around 3 p.m. CDT (20 UTC). Watch live via the Virtual Telescope Project. 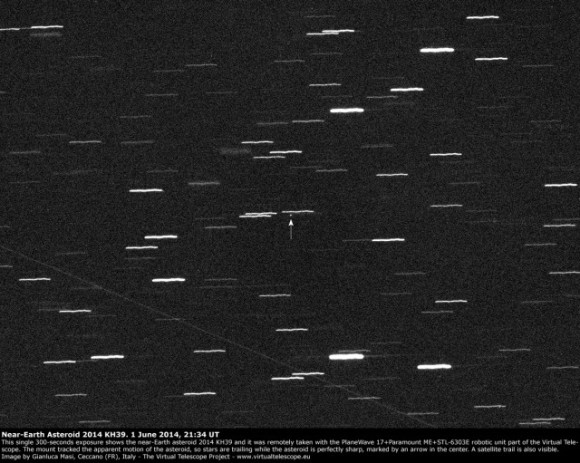 Here is near-Earth asteroid 2014 KH39, caught while approaching Earth on June 1, 2014. Image via the Virtual Telescope. This image is a single 300-second exposure, taken while tracking the apparent motion of the asteroid. The short trailed images are stars. Asteroid 2014 KH39 was about 2 million km from us when this image was acquired. A satellite trail is also visible.

You can watch online today (June 3, 2014) as a hefty asteroid – a bit larger than the one that exploded in the air over Russia in early 2013 – passes us just outside the orbit of the moon. Closest approach will come at 20:07 UTC, or 3:07 p.m. CDT. You can watch this event online thanks to astrophysicist Gianluca Masi’s Virtual Telescope Project. If you watch, you’ll find real-time images and live commentary during the flyby. The webcast begins at 2:45 p.m. CDT (19:45 UTC) on June 3. Click here to go to the webcast.

It will be nighttime in central Europe and Africa during the passage, but amateur observers will not see the asteroid. It’s much too faint at magnitude +17 for amateurs to spot it in their telescopes (although astrophotographers might have a chance).

The asteroid 2014 KH39 will come closest at just 272,460 miles (438,480 km) or 1.14 lunar distances. This is no kind of record; asteroids have been known to pass closer to Earth than the moon, as, for example, two asteroids did on two consecutive days in March.

The automated Mt. Lemmon Sky Survey discovered this asteroid on May 24. It will move across the constellation Cepheus at nearly 25,000 mph (11 km/sec) near the Little Dipper. According to AstroBob:

Further observations by the survey and additional telescopes like the Pan-STARRS 1 observatory in Hawaii nailed down its orbit as an Earth-approacher with an approximate size of 72 feet (22-m). That’s a tad larger than the 65-foot Chelyabinsk asteroid that exploded into thousands of small stony meteorites over Russia in Feb. 2013. 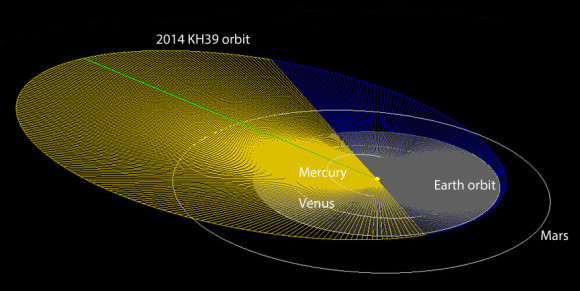 Diagram showing the orbit of 2014 KH39. Yellow shows the portion of its orbit above the plane of Earth’s orbit (grey disk); blue is below the plane. When farthest, the asteroid travels beyond Mars into the asteroid belt. It passes closest to Earth around 3 p.m. CDT June 3. Credit: IAU Minor Planet Center, via AstroBob.